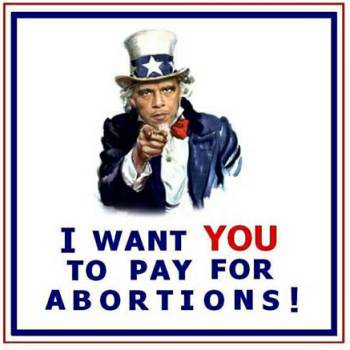 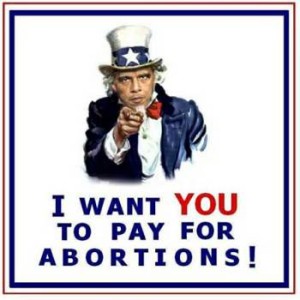 Since ObamaCare was first proposed, Americans have been in danger of funding thousands more abortions every year. And now, a detailed list created by the Susan B. Anthony List describes how, under the gargantuan mess that is ObamaCare, “as many as 111,500 additional abortions per year could be heavily subsidized by taxpayers.” This, despite the recent reminder provided by a CNN poll that the majority of Americans have always opposed taxpayer-funded abortions.

The SBA List reports that subsidies are one main way that ObamaCare forces taxpayers to fund others’ elective abortions. In twenty-six states, “refundable advanceable ‘affordability’ tax credits” will “heavily subsidize the purchase of insurance plans that cover elective abortion.” These twenty-six states have not removed elective abortion coverage from their insurance exchanges – thus forcing taxpayers to fund the coverage. SBA List explains that the taxpayer funding “may reach as high as 100 percent of the premium. Such a massive subsidy to buy elective abortion coverage has never before been available to the public and it represents an imposition on all U.S. taxpayers.”

Yes, a mandatory minimum. Instead of allowing Americans to “choose” whether or not they desire to fund elective abortions, ObamaCare is forcing this onto unwilling Americans. Now, ObamaCare has made it mandatory to pay for abortions.

As if this is not outrageous enough, ObamaCare makes it difficult for citizens to determine whether or not they are purchasing a plan that covers elective abortion. While regulations require just “one pro-life plan…be established among the ‘multi-state plans'” and “offered in each state health exchange,” it’s still a mucky catastrophe. SBA List explains:

Intense review of the healthcare.gov website, revealed that it is nearly impossible for consumers to discern which plans exclude coverage of elective abortions and abortion-inducing drugs. 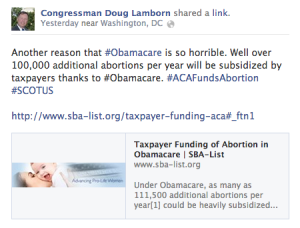 Congressman Doug Lamborn took to Facebook to explain the dangers of ObamaCare.

Add to all this the expansion of Medicaid – and its increased funding of elective abortions – as well as the requirement for insurance plans to provide “abortion-inducing drugs,” and you can see how ObamaCare steamrolls the taxpayers. ObamaCare entirely dismisses the wishes of the majority of Americans, forcing us to fund active, elective killing of unborn children – to the tune of more than 100,000 of them every year.

To find out more about how this happened and what’s being done about it, read the additional details from SBA List here.

As American citizens, we ought to be metaphorically banging down the doors of Congress. We ought to absolutely insist that they pass an amendment to ObamaCare that will stop us from being forced to pay for elective abortions. We ought to ask our own representative and senators to do their part to reveal the truth about ObamaCare and taxpayer abortion funding – just like Congressman Doug Lamborn has done.

The majority of Americans should not be relegated to a one-plan option that’s nearly impossible to find in the first place – all so we don’t have to pay for thousands of murders that we don’t support.

This is wrong. Outrageously wrong.