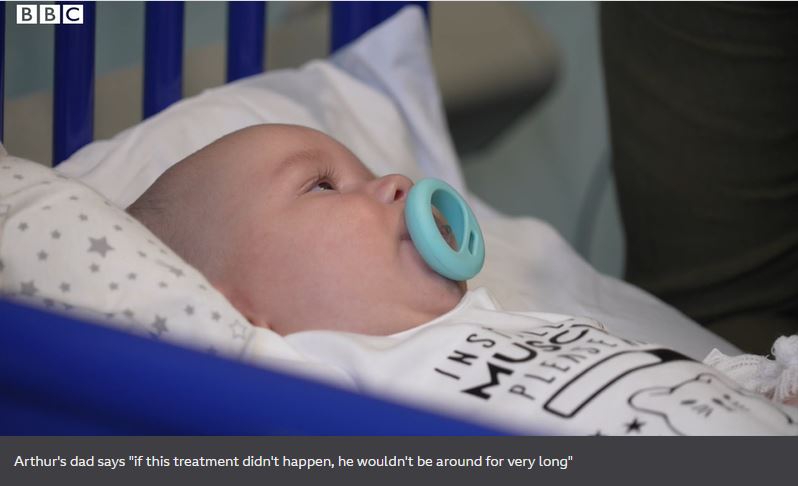 Five-month-old Arthur Morgan has become the first patient in England to receive a life-saving treatment that can prolong the lives of children with spinal muscular atrophy (SMA), a progressive disorder that causes loss of muscle control. The treatment could enable babies with SMA to sit, crawl, and walk—which would have been impossible just years ago. Left untreated, babies with type 1 SMA, the most severe form of the condition, have a life expectancy of only two years.

Zolgensma, a gene therapy that is manufactured by Novartis Gene Therapies, carries a price tag of $2.1 million per dose, but all it takes is one dose. It has been dubbed “the most expensive drug in the world.” Over 1,000 children under the age of two with SMA had been treated with the drug as of January 2021. Zolgensma targets the genetic root cause of SMA and replaces the function of the missing or nonworking survival motor neuron 1 (SMN1) gene with a new, working copy of a human SMN gene.

The treatment was made available on England’s National Health Service after they struck a deal with Novartis Gene Therapies in March that provides patients with the drug for a substantial confidential discount.

“Spinal Muscular Atrophy is the leading genetic cause of death among babies and young children, which is why NHS England has moved mountains to make this treatment available, while successfully negotiating hard behind the scenes to ensure a price that is fair to taxpayers,” NHS England Chief Executive Sir Simon Stevens said in a statement.

Arthur, who was diagnosed with the condition earlier last month, received the treatment at Evelina London Children’s Hospital. According to BBC, he was already experiencing difficulty moving his arms and legs and could not lift his head. The hope is the treatment will stabilize his condition and prevent further deterioration.

Arthur’s father, Reece Morgan, 31, broke down when he found out his son was the first patient to receive the drug in England. “We still don’t know what the future will hold, but this gives Arthur the best possible chance to give him the best possible future,” he said.

The availability of Zolgensma at the discount is a game-changer for families. Live Actions News previously reported on an infant with SMA in Denmark whose parents were in a race against time to raise the over $2 million needed for the treatment. Fortunately, due to international news coverage, many generous individuals and organizations stepped up to the plate and contributed substantial donations.

In addition, in February of 2021, Live Action News featured the story of the youngest child to ever receive Zolgensma. Diagnosed prenatally with spinal muscular atrophy, Lexa Dennis received Zolgensma at just four days old, and she is expected to be virtually unaffected by the disease. Prenatal testing was used to diagnose Lexa so that she could benefit at soon as possible from Zolgensma.

Around one in 50 people carry the faulty gene for spinal muscular atrophy, and the condition affects approximately one in every 10,000 births. England’s NHS hopes the treatment provides hope for families of children facing the same diagnosis.

Health Secretary Matt Hancock said, “I am so glad young Arthur can access this potentially life-changing treatment on the NHS. I hope it grants his family and many others renewed hope that more children’s lives can be transformed.”