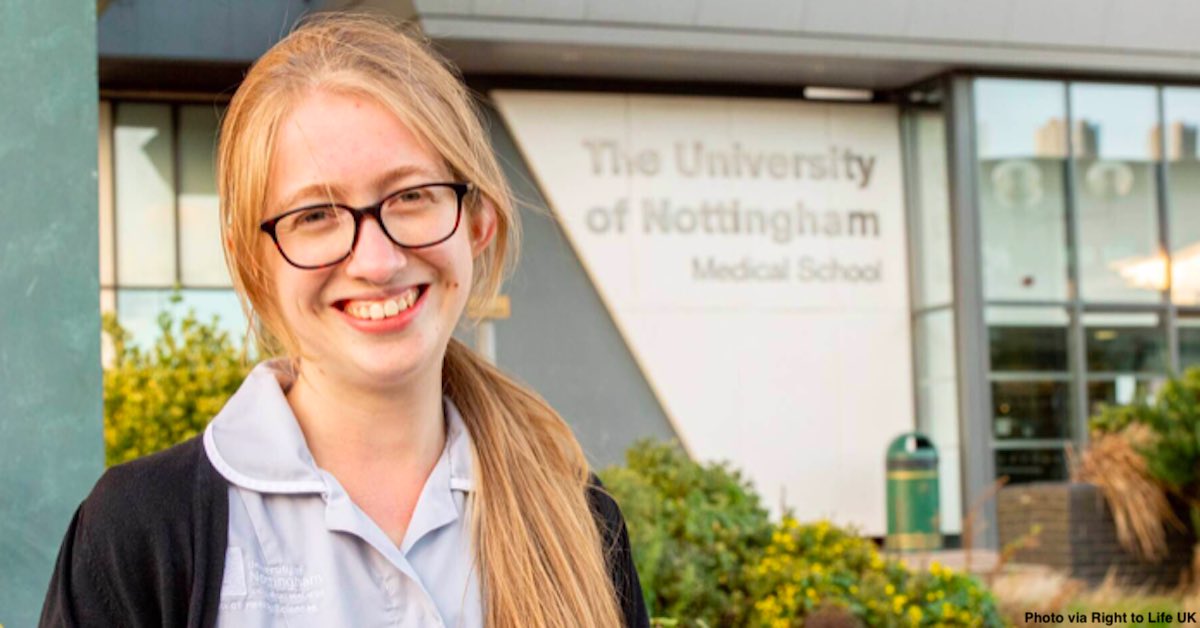 (Right to Life UK) A midwifery student, who faced suspension from her studies due to her involvement in the university pro-life society, has won an apology and payout from her university.

Julia Rynkiewicz, 25, faced suspension from the University of Nottingham and a four-month-long fitness-to-practice investigation in 2019 as a result of lecturers raising concerns about her being pro-life.

In January of this year, university officials U-turned on their decision and dismissed the case against her. Julia asked for an apology “as a matter of justice” so that “they realise they have done wrong and will change it so that no one else has to go through what I have”.

After a formal complaint was filed, the university has now conceded a settlement and apology.

Putting my life on hold

Julia said: “Putting my life on hold because of an unjust investigation was really difficult, both mentally and emotionally”.

“The settlement demonstrates that the university’s treatment of me was wrong, and while I’m happy to move on, I hope this means that no other student will have to experience what I have”.

“What happened to me risks creating a fear among students to discuss their values and beliefs, but university should be the place where you are invited to do just that”.

A University of Nottingham spokesperson said: “While all universities take fitness-to-practice considerations extremely seriously, the university has offered an apology and settlement to Ms Rynkiewicz and is considering how we might approach such cases differently in future”.

“The university and Students’ Union supports the rights of all students to bodily autonomy and access to safe, legal abortion services, which is the position in law”.

“Universities should be spaces to debate, discuss and disagree points of view, and with more than 200 student societies, covering the full range of beliefs and perspectives, we are confident this is the case at Nottingham”.

Julia had served as president of the student pro-life group, Nottingham Students for Life (NSFL), which itself was initially denied affiliation to the Students’ Union. This viewpoint discrimination only ended after NSFL threatened legal action and the decision was overturned in July 2019.

One of the chief concerns surrounding her fitness-to-practice investigation was Julia’s public involvement with NSFL.

READ: Sweden has a midwife shortage — but if you’re pro-life, you might be turned away

The University of Nottingham is not alone in this kind of viewpoint discrimination. In the last three years, student representative bodies at Aberdeen University, Glasgow University and Strathclyde University have all tried to prevent student pro-life groups from being affiliated with their university and benefiting from the same privileges available to any other student group. In each of these cases, the student unions had to reverse their decision after the groups threatened legal proceedings against them. Pro-life students at the University of Birmingham also faced significant opposition in the formation of their group.

It’s good to see the university admitting its wrongdoing. The fact that this happened at all though, is a strong indication that the university does not take its commitment to debate and discussion seriously.

Worryingly, 38% of students fear their future careers would be adversely affected if they express their true opinions. So long as universities continue to discriminate against mainstream views, pro-life and others, debate and discussion will continue to be stifled and students will increasingly fear reprisals from their university.

Editor’s Note: This article was published at Right to Life UK and is reprinted her with permission.