Last month, a young woman gave birth prematurely to a 20-week-old infant at Medway Maritime Hospital in England.  What makes the story especially tragic is that the premature delivery was not due to an accident or unintended medical complication – the baby’s 19-year-old mother had tried to induce an illegal abortion.

This child could have been aborted legally. Abortion is legal in Great Britain up to 24 weeks. Later abortions can be legally committed if there is a disability or health problem in the baby or if the woman’s life is in danger. But for whatever reason, the woman, whose name has not been released and who police say has “mental health problems,” self-aborted her child.

Doctors and nurses at the hospital first thought the baby was stillborn, but a midwife detected a heartbeat. No child has ever survived being born at 20 weeks. The hospital did not attempt to resuscitate. Sadly, the baby was never even given a name. Dr. Ed Ruffle, who led the team investigating the incident, said:

The circumstances surrounding the incident and the extreme vulnerability of the parents meant it was not in the public interest to prosecute. She was one of the most vulnerable women I have ever met. She’d been in the foster system from a very young age and was abused by a family member.

This sad story highlights the need for pro-lifers to reach out to abortion-minded women in crisis. In the United States, there are over 2200 pregnancy resource centers that seek to help women considering abortions. These centers support women emotionally and help them with material things they need. They also offer counseling, referrals, ultrasounds, help finding affordable medical care, help with housing, baby items, maternity clothes, and other things pregnant women and their children need. Some centers offer job training and parenting classes. All of the services at pregnancy centers are free.

Late-term abortion after 24 weeks gestation is typically done via the induction method, described below by Dr. Anthony Levatino, a former abortionist:

Sadly, the mother of this aborted baby may face emotional trauma because of her tragic decision. Many studies have shown that abortion exacerbates (and may even cause) mental health problems. A 2011 study in the prestigious British Journal of Psychiatry documented this. The meta-analysis examined 22 different studies that had previously been done on abortion and mental health issues. It considered the experiences of over 63,000 women who had abortions, and found that women who have abortions have an 81 percent higher risk of mental health problems than non-aborted women.

The case of the illegally aborted baby brings to mind another case, which Live Action covered in 2015, of a woman having an abortion who also ended up at a hospital to deliver her child. Anna C took tablets at a Planned Parenthood facility to abort her 24-week-old preborn child. She was keeping the abortion a secret from her mother, with whom she lived. She was supposed to return to the Planned Parenthood facility to “give birth” to her dead baby, which would then be disposed of, or possibly dissected and sold to a fetal tissue procurement agency. Instead, Anna called an ambulance when she started labor.

She was rushed to the hospital where she delivered her child, whom she named Mary Lynn. Mary Lynn had died in the womb. Anna C did not tell the nurses and doctors at the hospital that her baby had been killed by Planned Parenthood. Instead, she led them to believe that she’d lost the baby in a tragic, but naturally occurring, stillbirth. People at the hospital believed her child had been wanted. Therefore, they cleaned and dressed the baby, and brought her to Anna C to hold.

Anna C took the following picture, which she shared with Live Action: 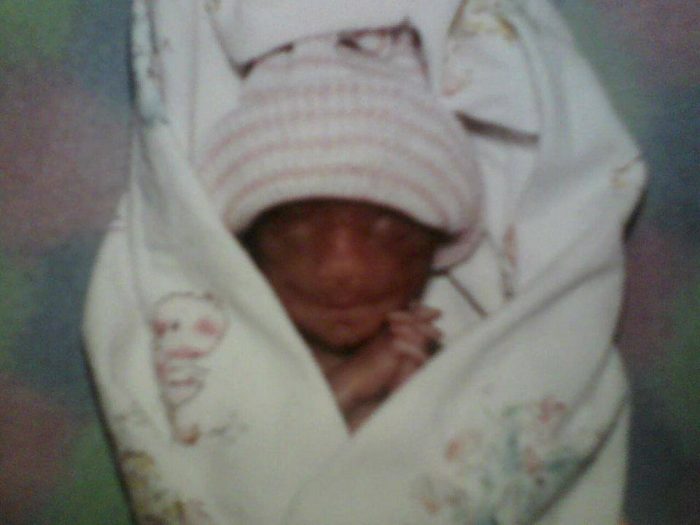 It hit me the hardest when I woke up in the hospital bed with her in my arms and she was warm from my own body heat and for a moment I could pretend that I hadn’t done what I had done….

It hit me again when I called and begged the funeral home to unseal her casket so I could hold her one last time. Those precious, tiny fingers. That soft skin and tiny little mouth….

It hits me every time I think about it and wonder what kind of little girl she would have been.

Both Mary Lynn and the unnamed British child were human beings with a right to live. One was mourned and one was not. But they were both fully developed babies, with arms and legs, fingers and toes, and beating hearts. They were children who could feel pain as they died.

The pro-life movement must continue to try and save children like these as well as their vulnerable mothers.