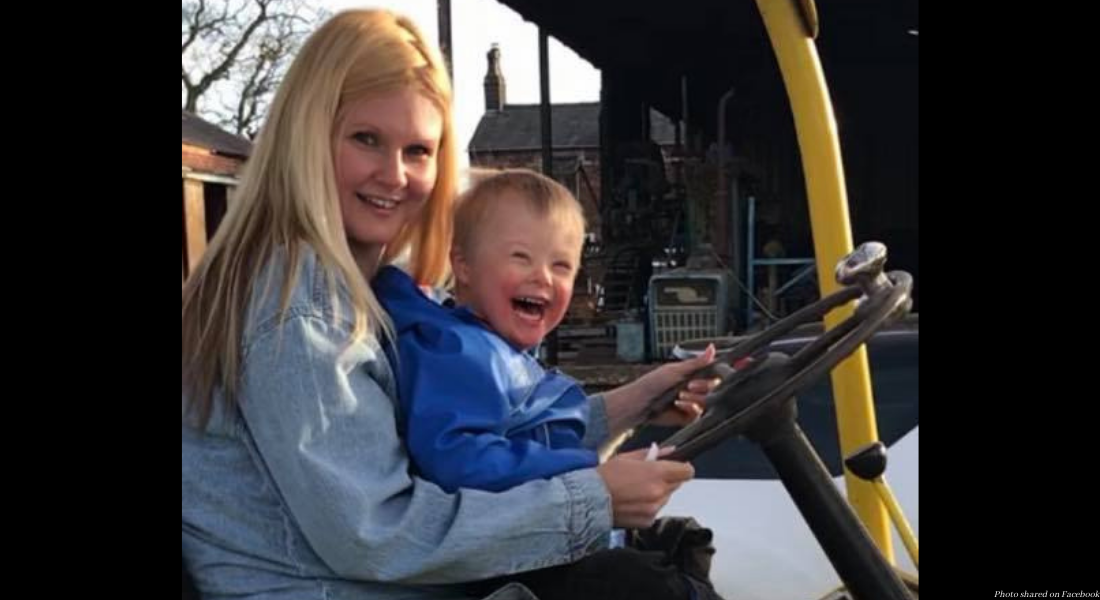 A mother told her son may have Down syndrome was pressured to have an abortion, even though she was due to deliver in just three weeks.

Tracy Seager is one of many people in the United Kingdom sharing her story as part of the #imwithheidi movement. Heidi Crowter, a young British woman with Down syndrome, has been campaigning to overturn a discriminatory law which targets people with Down syndrome and other disabilities. In the United Kingdom, abortion is illegal after 24 weeks of pregnancy, unless the preborn child is diagnosed with any disability, even one as minor as a cleft lip. In such cases, abortion is permitted at any time up to birth.

Seager learned at a 37-week scan that her son might have Down syndrome. She said she was then pressured to have an abortion, which she ultimately refused.

“It made me feel like his little life wasn’t worth living,” she said in an interview LancsLive. “They had already shown me a scan of his face and he was fully formed. What they said at that time still haunts me because he was a fully formed baby — he was real. It’s so upsetting that people don’t think my little boy has got a life worth living when he has.”

Her son, Jacob, is now four, and does have Down syndrome. But Seager said he is amazing, and that his life does have worth.

“It’s nothing like what they had made it out to be,” she continued. “Yeah there are sad things and there is hard times but it’s amazing as well, it’s not all negative doom and gloom like it’s portrayed to be. Everyone always says how happy he is.”

Another mom, Christina Bowman, was told on social media that she was “selfish” for not aborting her son, Max. And according to Bowman, women in the United Kingdom are set up to believe the misconceptions about Down syndrome. “Parents don’t get given the right information, the balanced information to be able to make those choices,” she said. “This is not just about the abortion, this is about equality. This is about people with Down syndrome having equal rights even in the womb.”

Bowman said she was constantly being told negative information about Down syndrome, even though it was outdated and inaccurate — something she has discovered herself, now that Max has been born.

“I cried – I was so frightened of the future I thought, he’s never going to get married or he’s going to die young,” she said. “All these things aren’t true for everybody. I would have just accepted that people get abortions because it’s hard to have a child with Down syndrome but it’s not as hard as people make out. I just know that my son could have been terminated right up until he was born and it sickens and frightens me that I might not have known how beautiful my son is if I had done that. He brings us joy everyday. Our family is now closer since having Max.”

Seager and Bowman are far from alone. Many other women have spoken about the immense pressure they’ve received to have an abortion, solely because of Down syndrome.

One mom was offered an abortion 15 times, with the doctor telling her she could have an abortion until her baby was traveling down the birth canal. Another woman was told her son had no chance of surviving, and when she still chose life, her medical team abandoned her, offering no help through the pregnancy and delivery. Her son ended up having Down syndrome, but is otherwise healthy and thriving.

The United Kingdom’s Antenatal Results and Choices (ARC) will only give parents resources and support if parents choose to have an abortion after a prenatal diagnosis.

Heidi Crowter, for her part, has continued to advocate for the entire Down syndrome community, saying she is more than the label the medical community gives her.

“The reason I feel so strongly about abortion is because I am someone who has Down’s syndrome,” she said earlier this year. “And I don’t want people to see me as ‘a devastating diagnosis’ or ‘a crisis pregnancy.’ I want them to see the real me. I don’t want to be treated differently because of my [extra] chromosome.”