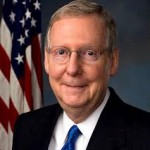 In a statement released March 18, U.S. Senate Republican leader Mitch McConnell of Kentucky honored the memories of those murdered at the hands of callous abortionist Kermit Gosnell.

The statement’s release date was the one-year anniversary of the opening of the Gosnell trial, which ultimately led to the abortionist’s imprisonment for multiple counts of murder, illegal late-term abortions, and many other violations of the law.

Gosnell will be in prison for the rest of his life, but because of him hundreds – probably thousands – will never live at all, and many of them died excruciating, inhumane deaths. Lest the nation forget the realities that came to light during the Gosnell trial – namely, the realities associated with the science of fetal pain and late-term abortions – Sen. McConnell issued the following statement (emphasis added):

It was one year ago this week that Americans across the country first learned the name of a Philadelphia abortionist named Kermit Gosnell. The Gosnell trial shocked the conscience of the nation and awakened many to the dangerous conditions that can exist at abortion clinics nationwide.

It prompted a renewed commitment to ensuring that health and safety standards at these clinics are actually enforced, and it led to the humane effort to ensure that late-term babies who have developed to the point that they are capable of feeling pain are protected from rogue doctors and lax regulators alike.

At the federal level, this effort resulted in the Pain-Capable Unborn Child Protection Act, which passed the House last summer in a historic pro-life vote. Senator Lindsey Graham has sponsored a companion bill in the Senate, and I am proud to stand with the Pro-Life Women’s Caucus in Congress and a clear majority of women nationwide in support of this common-sense legislation.

It is time for America to join the ranks of most other developed nations around the world and restrict abortion at least at the point at which science tells us that unborn babies are capable of feeling pain. On this anniversary of the Gosnell trial, let’s show the world that we remember those who have been victimized by people like Kermit Gosnell and unite in this positive and life-affirming effort to safeguard the most vulnerable among us.

Let’s take up this important pro-life legislation and send it to the President.