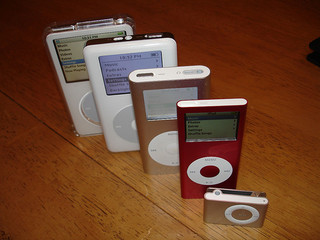 A Texas woman’s novel way of dodging abortion regulations may be music to the ears of pro-choice advocates, but it highlights the abortion movement’s selective desire to conceal truth.

Drowning out the truth with music. Photo credit: @cdharrison on Flickr

A Texas woman’s novel way of dodging abortion regulations may be music to the ears of pro-choice advocates, but it highlights the abortion movement’s selective desire to conceal truth.

In many states, pro-life groups have successfully enacted laws requiring women to receive an ultrasound before an abortion procedure. Texas law goes one step farther, requiring women seeking abortion to hear their children’s heartbeats and a medical explanation of the sonogram. Denise Paolucci, 35, has decided to combat the new law by providing iPods to women seeking abortion – enabling them to tune out the required information. Irin Carmon reported for Salon:

[Paolucci] contacted several Planned Parenthood branches to check that they would be up for her plan, and heard back from a few of them. Last night, she posted about the idea on her blog at Dreamwidth, the site she co-owns and helps run. “It took about nine hours, overnight, to reach the goal,” initially set at $1,060, she says. If there’s more interest, she’s looking for help in finding independent abortion providers in Texas who’d be up for it, and has encouraged her readers to donate directly to Planned Parenthood or to the National Network of Abortion Funds.

This recent action, as well as the entire debate over ultrasound laws, has blatantly highlighted the pro-choice movement’s obsession with drowning out truth. Rather than providing women with honest medical information, pro-choice advocates opt to conceal the facts. They wish to silence massacre with melody, blood with ballads, slaughter with song. The beat of a child’s heart is muffled by the beat of its mother’s favorite music.

But why the opposition in the first place?

Every argument that the pro-choice movement makes against these laws reveals reasons why a genuine advocate of choice should support them. True choice requires knowledge of what the choice entails. An uninformed choice is no choice at all. But don’t just take my word for this – pro-choice advocates inadvertently agree.

NARAL’s Nancy Keenan, a staunch opponent of the Texas ultrasound law, said in a press release on CPC regulation:

Even though we may have differences of opinion on abortion, Americans value honesty in advertising. We should all agree that a woman should not be misled or manipulated when she’s facing an unintended pregnancy.

Can anyone say “double standard”?

Women should know what they’re getting when they walk into a crisis pregnancy center, abortion advocates cry. But when it comes to a life-altering medical procedure, the calls for clear information disappear and are even condemned when they come from the other side. It seems as though the values of truth and honest information matter only when they are encouraging abortion.

But Nancy Keenan is only one example. This quotation comes from a 2011 Jezebel article by Irin Carmon (author of the iPod article quoted above) on CPC regulation in New York City:

At a press conference held just now, [city council Speaker Christine] Quinn said, “If you hide what you do, you must believe you can only do what you do through deception.”

Ultrasound laws make women uncomfortable because abortion is uncomfortable. No amount of turning up the volume will reverse that truth.