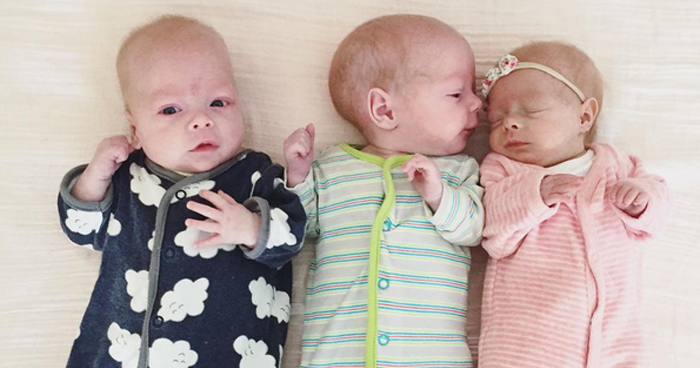 On September 22, Chloe Dunstan was due to give birth to triplets: two boys and a girl. But early in July, midway through her pregnancy, the Australian mother faced an impossible choice: continue with the pregnancy and lose her baby girl (who was deprived of oxygen and nutrients), or deliver early at 28 weeks, which could put all three babies at risk.

Doctors recommended that Chloe consider letting her preborn baby girl die in order to give the two baby boys better odds of survival. But in an effort to save all three babies, Chloe decided to deliver early. On July 3, she gave birth to triplets – Chloe and husband Rohan’s fourth, fifth, and sixth children: Henry, Rufus, and “miracle” baby Pearl. All three babies survived, and arrived home from the hospital before their September due date.

Couldn’t resist posting another picture from yesterday. ? Love these three to bits.. It still feels surreal that they’re all home! ?

“Pearl would have died if we didn’t deliver early, so I will never regret that,”  Chloe told Daily Mail Australia. “I do remember briefly considering the alternative of letting her go so her brothers could continue to grow strong and healthy and have the best start in life, but now that she’s here, my heart hurts at the thought of not having her in our lives.”

Oh my babies ?????? I love how beautifully individual you each are already. ?

I feel like the odds were stacked against me for having a daughter. I had three boys, fell pregnant with triplets, two boys and a girl, but she was only just holding on to life in utero, with severe growth restriction and cord flow problems. Delivered at 28 weeks weighing 690g (1lb 8oz) she had a rocky start, with some big bumps in the road – like suffering a pulmonary haemorrhage which has up to a 40% mortality rate. She has had issues with her heart, lungs, liver, brain, digestion, bones, blood and more.. But look at her. She is still here and she is doing amazingly well. Her name “Pearl” means precious, and her middle name “Miriam” means wished-for child, which is exactly what she is. Along with her five beautiful brothers who are of course just as loved and just as special – but Pearl has just really fought the odds to be here today. If she isn’t a little miracle, then I don’t know what is. ❤️ A photo posted by @chloeandbeans on Aug 21, 2015 at 12:34pm PDT

Cuddles with my sweet girl. She has officially doubled her birthweight and is currently weighing 1.4kg (3lb 1oz) and is getting 17ml of calorie fortified donor milk every two hours in her tube. Today her nurse explained to us that she has something called metabolic bone disease, so we have to make sure we are especially careful when handling her, because her bones are ultra fragile and could break. It’s something that’s being monitored and treated and will resolve over time.. But it just sounds so scary. I just want time to fast forward and for her to get bigger and stronger. I love you Pearl. ❤️

Our baby girl has had a rough couple of days. She is currently fighting an infection, so she’s on antibiotics, has been taken off feeds again, back on the ventilator and back below her birth weight. Poor little possum.. Hoping she bounces back quickly.. We love you so much, little one. ? A photo posted by @chloeandbeans on Jul 16, 2015 at 12:47am PDT

Triplets. I can’t believe they’re all mine. I have been blessed beyond belief with my three gorgeous boys at home and now I’ve got three brand new tiny miracles to love. They’re perfect and I’m so happy. My family is complete. ❤️?? #babyspam #triplets #28weekers

Rufus + Henry ?? So I’ve been to visit the babies since the birth and I got the touch these sweet souls. They’re so precious. So these two could be identical or fraternal, we won’t know for a while but I’m totally not ruling identical out because so far I think they look pretty similar, apart from the size difference. It will be fun to speculate as they grow. Ugh, I’m in love love love. ??? A photo posted by @chloeandbeans on Jul 3, 2015 at 9:51am PDT

As could be expected, the early delivery presented complications – but none that the babies didn’t overcome. All three babies underwent blood transfusions, and it was baby Pearl who faced the toughest fight for survival. Chloe explained:

Pearl had a PDA in her heart that closed on its own, she had a pulmonary hemorrhage, a minor brain bleed, she fought a horrible infection and there were days we weren’t sure if she would make it – especially the early weeks when she was on a ventilator. She had something called metabolic bone disease, which resolved with medication. The main ongoing issue was her liver, as she was very jaundiced for the whole time she was in the hospital, but the latest scan showed that everything looked fine.

The bravery and determination of Chloe, Henry, Rufus, and Pearl has captured the hearts of thousands of Australians, as well as others from around the world who follow the family’s inspiring journey via social media. According to Daily Mail, Chloe’s Instagram page has gained more than 45,000 followers, who can follow the triplets’ ongoing survival story.

“At this point I can’t say exactly what the future holds, but all three babies are strong and healthy with no known issues,” said Chloe. “They seem to fall asleep instantly when they are close and cuddling. I can’t wait to see how their bond grows over time.”