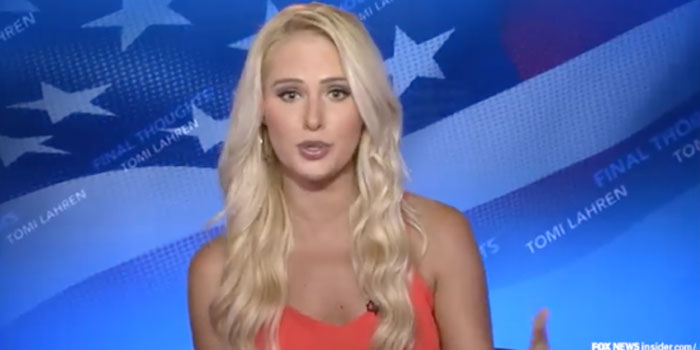 Whenever Tomi Lahren talks about abortion, she makes the rounds. Most recently, the 25-year-old commentator did a segment for “Final Thoughts” on FOX News, claiming that “we lose when we start messing with social issues.” She then laid out her reasoning on why it would be wrong for conservatives to push for an overturn of Roe v. Wade.

Let’s contrast five of Tomi’s claims with the facts:

CLAIM #1: “According to a new Quinnipiac poll,” most Americans support Roe v. Wade.

Consider the polling that showed Hillary Clinton would easily best Donald Trump in the 2016 race for president. Her lead was called “remarkably stable” by the experts on Election Day.

Consider also that many polls do not ask questions that would give a full picture of Americans’ beliefs, particularly on an issue like abortion. The Quinnipiac question Tomi referred to was: “In general, do you agree or disagree with the 1973 Roe v. Wade Supreme Court decision that established a woman’s right to an abortion?” It’s not difficult to see the nuances that could influence a person’s answer to an overly simplistic question like that. Moreover, the Quinnipiac poll conflicts with the June 2018 Gallup poll which showed that 53 percent of Americans want to see abortion legal in only a few or no circumstances.

This is in direct contradiction to the holding of Roe v. Wade, proving that asking Americans whether they agree with a decision they clearly do not understand is probably not the most accurate strategy.

CLAIM #2: “The economy, foreign policy, and tax reform” are the areas that “benefit ALL Americans, regardless of religion or social beliefs.”

FACT: Whether laws “benefit ALL Americans” is not the only American measure of a good law.

First off, there are countless areas of law and policy beyond these three that benefit Americans in general. But benefitting the majority has hardly been the only American measure of a good law. In fact, many constitutional scholars would explain that our nation’s foundational documents were actually designed to protect the rights of the minority. One of the main reasons for the freedom of speech found in the First Amendment is to protect unpopular speech that the majority scorns.

The Fourteenth Amendment — which recognizes every person’s right to life — was originally created to protect the most vulnerable members of society. That does not include “ALL Americans,” and yet, clearly, it is beneficial and important.

Finally, protection for every human life, beginning in the womb, does indeed benefit ALL Americans (if that were the measure of a good law), considering that’s where we each started.

CLAIM #3: “Legal tradition makes it harder to overturn a past decision – unless there are strong grounds for doing so.”

FACT: Legal tradition — better known as stare decisis — does not set an error-ridden ruling in stone.

Tomi Lahren does not even bother to attempt to explain how she assumes there are not strong grounds for overturning Roe v. Wade. (Hint: because there are strong grounds for its reversal.) But, to the main point: Arthur Vanderbilt, a former chief justice of the New Jersey Supreme Court, explains the reality of stare decisis:

The doctrine of stare decisis neither renders the courts impotent to correct their past errors nor requires them to adhere blindly to rules that have lost their reason for being. The common law would be sapped of its lifeblood if stare decisis were to become a god instead of a guide. The doctrine when properly applied operates only to control change, not to prevent it.

I address this more here.

CLAIM #4: “It’s not the government’s place to dictate.”

CLAIM #5: “Let’s be honest — the federal government does few things well, and I believe regulating social issues is an area where it fails. Let the churches, the non-profits, and the community groups step in, not almighty Uncle Sam.”

FACT: The churches, non-profits, and community groups of America have never been in charge of stopping the killing of innocent persons.

Should these non-government entities speak out against abortion? Absolutely. Should they surround pregnant mothers in difficult circumstances with love, support, and practical help? Without a doubt. But, without the power of law, no church, non-profit, or community group can end abortion or even legally stop a single death. When it comes to protecting the lives of the innocent, government must be involved.

Take the words of Thomas Jefferson, the man who wrote the Declaration of Independence: “The care of human life and happiness, and not their destruction, is the first and only object of good government.” Moreover, it was Jefferson who first ranked the unalienable rights our government must guard: life came first.