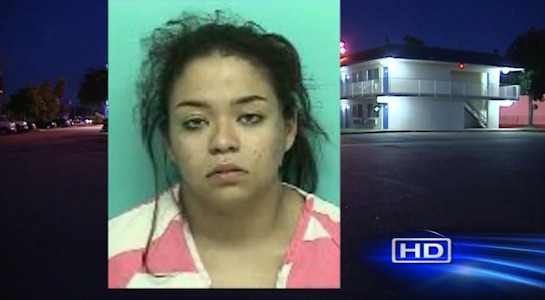 In Montgomery county, just outside Houston, Texas, Lisa Martinez got a desperate call from her 19-year-old son Gregory, who was with his 23-month-old daughter at a nearby Motel 6. When Lisa arrived, Gregory led her to the bathtub, where the baby was lying, barely conscious. Lisa picked her up and discovered a severe blow to the baby’s head. She called 911, and the baby was taken to the hospital, where her injuries were declared non-life-threatening. Lisa recounted the traumatic event of discovering her granddaughter to interviewers last night and sobbed as she remembered the baby’s condition:

When I flipped her over and that’s when I saw the blow to her head. She was all wet. I hold her against me, I covered her, and the saddest part was when her little arms kept tightening up every time I would move.

The little girl’s mother, Michelle Smith, was accused of beating the baby and leaving her in the hotel room. At this point, the father’s involvement is unclear. When Michelle returned to the hotel later, she would not identify herself as the baby’s mother. Gregory claimed not to know where Michelle had gone after she left. Both parents were arrested.

The baby is now in stable condition. Gregory and Michelle remain in jail and could face serious charges.