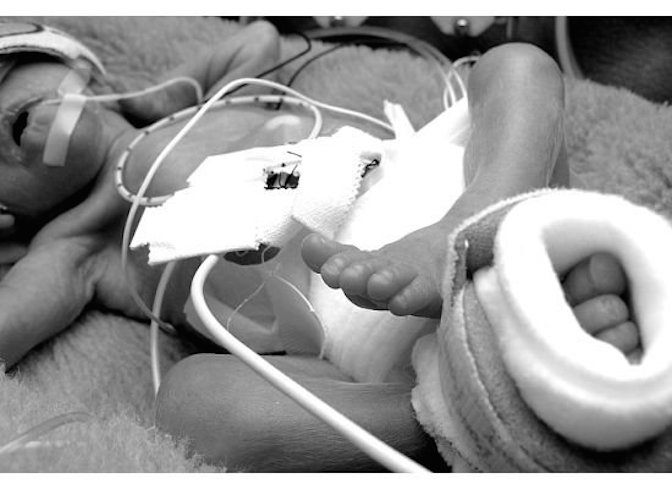 It was 2004 when I found out I was pregnant with my first child; I was 31 and as with most everything I did then, determined to do everything perfectly and by the book for “Bean.”

When we went in for my first appointment with the OB, we heard the heartbeat and were given “Bean’s” due date, which just so happened to be my husband’s birthday. Everything was going great, I was healthy, baby was healthy – to be honest I even skipped the chapter in the baby book on prematurity because I was doing everything right, so why bother?

Fast forward to the 26th week of my pregnancy.

It was my birthday and my husband’s gift to me was to take me to Milwaukee, WI (we lived in a tiny town SW of Madison) to get a 3-D ultrasound of Bean, who had by then graduated in name to Daisy. We drove to Madison, where we planned to spend the night, thinking the next day we would head to Milwaukee. However that night, as we slept in a Holiday Inn my water broke, I woke up covered in fluid and terrified.

We made it to the hospital where I sat in the ER wondering why I hadn’t gone into full blown labor since my water had clearly broken, and it was at this point the doctors explained I would be staying at the hospital until Daisy was born. They put me on a floor with other mothers who were struggling to stay pregnant; I spent two weeks there until Miss Daisy decided she’d had enough, and she came into the world mewing like a kitten at 28 weeks. Daisy in the NICU

I remember seeing her in the NICU for the first time, she was laying peacefully on a warming bed, intubated, covered in soft white hair that almost looked like feathers. I was shocked at how tiny and perfect she was, and that she had come from me. I also felt like I had failed her, that in some way I had let her down, and there was such a great loss.

Daisy weighed 2 1/2 pounds and was 15 inches long; a large soda at McDonalds weighs more than she did when she was born. She was a micro-preemie and located in the section of the NICU where the most fragile babies were cared for; the first time I ever saw her stop breathing was in that part of the NICU.

She would spend several weeks there, on the critical side, before moving to the less critical side and eventually to the PICU where she figured out how to breathe on her own. It took 63 days, the longest 63 days of my life.

Daisy is now an amazing, brave, empathetic, brilliant and funny 10-year-old who loves to read books, write stories and runs like a gazelle. Looking back at her early birth, I realize how blessed I am that she chose me, that I am not only a stronger advocate for life, but a better person.

Before she was born early I was very much pro-choice, the sort of pro-choice who wouldn’t have an abortion herself BUT who didn’t feel right telling other people they couldn’t. Watching that tiny little girl fight to live, and even smaller babies, some of whom didn’t make it, changed my mind and my heart forever.