This week, I came across an interesting post on social media (as I often do). The title grabbed my attention: “12 of The Scariest Documentaries on Netflix Right Now.” Since I’m a sucker for a good documentary, I clicked on this Bustle post from January (a little late to the party, I know) and perused the list.

What I found there left me a little stunned.

I wasn’t stunned at the list of documentaries about mass murderers, serial killers, exorcisms, atomic catastrophes, and the like… but one particular documentary caught my eye. Listed among all of these truly terrifying human tragedies was a documentary called “Trapped,” which is “a different kind of terrifying,” according to Bustle. This particular documentary “showcases the devastating effects that ‘pro-life’ policies have had on many of America’s most vulnerable women.” 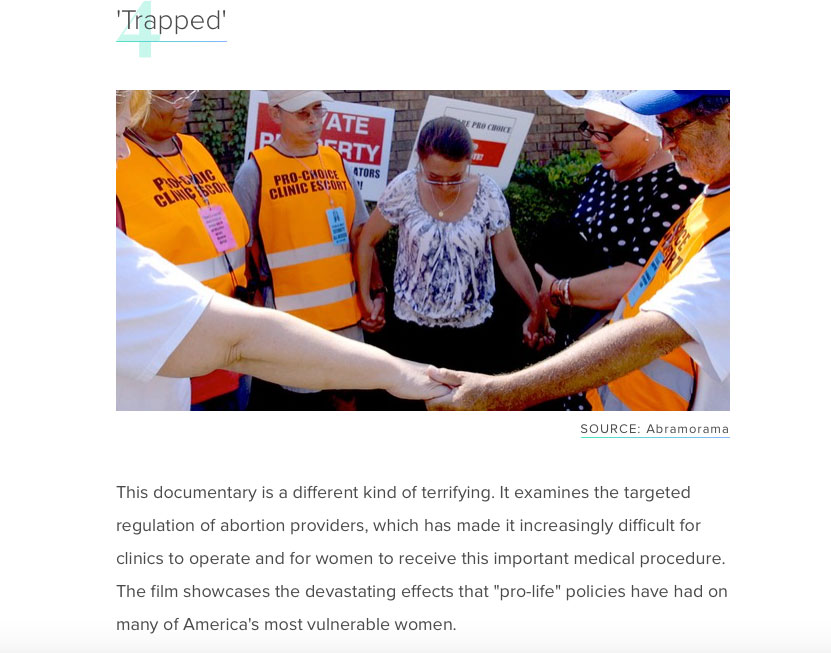 Screenshot of Bustle’s promotion of “Trapped” as a “scary” documentary

Yes, that’s right — apparently, Bustle finds the idea of not being able to just freely decide to kill one’s preborn child at any time, for any reason, to be “scary.” Like, put-it-on-the-list-with-atomic-bombings scary.

I have to question whether Bustle was purposely trying to be offensive by grouping history’s most prolific serial killers in the same category as “pro-life policies.” Because, yes, it’s offensive.

Pro-life laws actually save the lives of women and children. Laws requiring abortion facilities to be held to the same health and safety standards as… oh, say, veterinary clinics… would seem like common sense. Unfortunately, the abortion industry usually fights and succeeds against such life-saving regulations. “Access” trumps safety, and women are injured and dying because of it. That is truly scary.

Planned Parenthood of St. Louis is on record as having sent more than 60 women the the hospital since 2009 — and that’s just one facility, which is still open and operating.

Abortionist LeRoy Carhart has sent multiple women to the hospital, and has even killed two — yet he is still allowed to commit abortions.

Abortionist Lisa Perriera killed Lakisha Wilson at Preterm abortion facility in Ohio, and Perriera got to keep her job.

Karnamaya Mongar died at the hands of now-jailed abortionist Kermit Gosnell, whose own negligence and butchery seem to escape him. Gosnell also killed babies accidentally aborted alive by “snipping” their spinal cords after they had fully exited the womb. In other words, he’s a serial killer. (Hmm… I wonder if Bustle will promote the documentary about him.)

This is just a short list. There are many, many more examples of subpar facilities that are allowed to operate, risking women’s lives and safety.

Even the U.S. Supreme Court sent the message (in the Whole Woman’s Health v. Hellerstedt decision last summer) that being able to kill one’s child is more important than being able to kill one’s child in an environment that doesn’t also risk the woman’s life. Whole Woman’s Health, the plaintiff, has a sickeningly long list of health and safety violations and is still allowed to operate.

You want to know what’s truly scary? The idea that our dogs and cats get better health and safety standards than women entering abortion facilities.

What’s also scary is the fact that what goes on in an abortion facility isn’t exactly neat and tidy. Children are dismembered there, by suction, and by forceps.

Children further along in gestational age are injected with digoxin to cause cardiac arrest and fetal demise (death). Abortionists themselves admit that they know they are killing human beings.

Maybe Bustle needs to look into the human tragedy of abortion itself to truly understand that pro-life laws are far from scary. What goes on behind closed doors in a so-called “reproductive health clinic,” however, is more frightening than most people even realize.