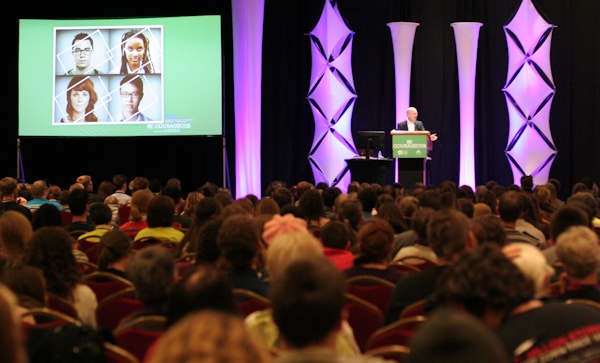 Informing people, and changing the tide.

Did you know that nearly 60% of college-aged people do not know that Planned Parenthood does abortions? This is a startling statistic when we consider the high abortion rates among 18- to 24-year-olds. To counteract this lack of information among the college crowd, Students for Life of America recently launched a sprint through eight colleges to spread awareness.

The initiative is called the Planned Parenthood Project, and it achieves its objective of raising awareness about the number of abortions that Planned Parenthood commits – and the fact that the organization offers them at all – by erecting 915 pink crosses on each college campus to represent the 915 lives that Planned Parenthood is responsible for taking each day in the United States. The crosses are “Planned Parenthood pink,” an eye-catching color that, combined with the sheer number, is sure to draw the attention of every student on campus. Great amounts of awareness will spread as a result of this audacious undertaking. 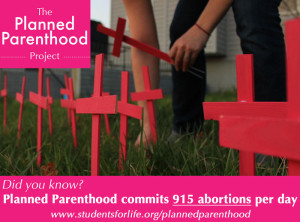 The two-week bus tour launched this past Monday, April 15. The itinerary is as follows:

Kristan Hawkins described the purpose of the Planned Parenthood Project in the following statement:

With the late-term abortionist/infant serial killer Kermit Gosnell trial happening right now in Philadelphia, ‘The Planned Parenthood Project’ is especially relevant. The gruesome crimes of Gosnell are not an isolated incident, Planned Parenthood, which holds itself up as a clean, safe, women-friendly environment, engages in the same disgusting practices.

Last week a Planned Parenthood in Delaware that has sent 5 women to the emergency room since January had to stop doing abortions because of unsafe and unsanitary conditions similar to the ones found at Gosnell’s abortion mill. One nurse said of the operating room, “It’s not washed down, it’s not even cleaned off. It has bloody drainage on it.” She also said patients “could be at risk of getting hepatitis, even AIDS.”

Two weeks ago, a Planned Parenthood official from Florida testified that a baby born alive during an abortion should be allowed to be killed, saying, “We believe that any decision that’s made should be left up to the woman, her family, and the physician.” Gosnell routinely killed babies born alive after an abortion – often by cutting their spinal cords.  Apparently that’s a decision Planned Parenthood supports a physician like Gosnell making.

In 2008, a New Jersey Planned Parenthood nurse told me to my face that with an abortion after 22 weeks, the baby is delivered and can survive an abortion: “It does happen, where it’s still alive…but it wouldn’t be able to survive on its own, so eventually the baby does die.” Again, Planned Parenthood knows and supports abortions that result in babies born alive but left to die, as happened in Gosnell’s facility.