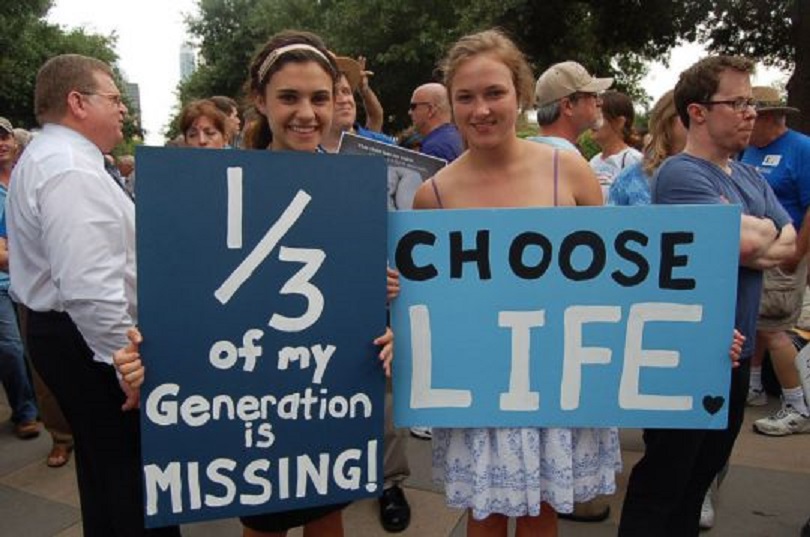 As I was looking through Live Action News, I stumbled upon an article titled: “You can’t say you didn’t know: What a real abortion video looks like.”  I had seen a video or two of an abortion before, but not in years. I usually like to stay away from the graphic images or videos out there as they are very ugly. But this time, I felt as though I needed to watch this.

I started crying 30 seconds in. The video shows the very graphic outcome of an abortion, and trust me, it is not pretty. Little hands are covered in blood, and tiny arms are pushed around. Then a whole baby is shown, headless, with its insides strewn around it. At one point I even saw the abortion instrument reaching into the mothers womb and carrying out a piece of the baby.

Is this freaking real? That is the first thing that came to my mind. How do we know this isn’t a fake video? Unfortunately, the video is 100% real-life evidence of what an abortion is. For those with questions about the authenticity of this footage, see the following signed documents from an abortionist and the photographer who took the vast majority of the content in this video.

After watching the video and wiping away a million tears, I thought to myself, how are people ok with this? No one in their right mind would watch this video and think, “oh yeah, that’s totally fine and normal. Taking a tiny baby apart is really a lovely part of life’s experiences.” No one could ever say that right?

Wrong. Planned Parenthood says that every single day. Every. Single. Day. Let that just resonate in your head for a moment. Every day, they endorse the belligerent killing of thousand upon thousands of little baby boys and girls, nestled in their mommie’s tummies.

So back to my original question: how are people OK with abortion? Well, simply because they have no idea what an actual abortion procedure looks like, or what it really does. No one just randomly googles, “abortion procedure video” in his spare time. All right, maybe some people do, but the majority of the human population does not.

Now, I am a very pro-life, and knowledge-able about abortion. If this is how shocked and horrified I am by this video, imagine how someone who doesn’t know much about abortion, is going to react. She is going to be extremely appalled and unbelieving.

What I’m getting at is if more people were educated about abortion – shown videos and images, told the facts and the medical procedure, and informed about all the emotional, physical, and psychological effects of abortion – there would be a ton more pro-life activists. The want for abortion would dramatically decrease as people, and especially women, would know they just couldn’t go through with an abortion. Most women are not down for having their children torn apart if they really understands what abortion is and how the baby (yes it’s a baby, not an un-feeling fetus) is as innocent as can be.

Now here is where you come in. It is your duty as a human being, and especially as a pro-life human being, to be the voice for all these innocent unborn babies. They can’t speak up for themselves, so you have to!

If actually standing up for your pro-life beliefs means watching a gruesome video and realizing you can’t just sit around and wait for others to end abortion, watch it.

You will never look back and one day say, “Oh gosh, I really wish I hadn’t put so much effort into helping the innocent and ending abortion. What a waste of my time.” So step out of your comfort zone. You won’t accomplish anything by telling yourself you’re pro-life but never telling others or acting on it. And honestly, it’s not that hard. It can be as easy as posting this article on your Facebook wall or as extreme as walking across America with pro-life signs. Whatever you do, do it. You have no excuse.

We may have survived Roe v. Wade, but Roe v. Wade will NOT survive us.

If you are considering abortion or need counseling either before or after an abortion, please consider these resources.