Today I’m pleased to admit that Vice President Biden has done something good for women. 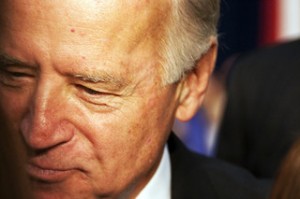 Today I’m pleased to admit that Vice President Biden has done something good for women. (Note that his support of abortion and his ability to “fully understand” China’s One Child Policy are most certainly not good for women.) To wit, Biden has spearheaded an effort to help men stand up as men and care for the women in their lives. From the White House’s own blog:

Last year, Vice President Biden launched the 1is2Many initiative to focus on a troubling fact—women between the ages of 16 and 24 experience the highest rates of relationship violence. Having worked to fight violence against women for almost two decades, the Vice President knew that overall rates of domestic violence have been falling, and he heard the numbers about young women as a call to action. He asked the Administration to focus on how we can engage young women and young men in preventing dating violence and sexual assault at their schools, where they work, where they hang out, and where they live.

Biden and his team have done a good job finding creative ways to use modern technology and celebrities to speak out against violence against women.

The Vice President has highlighted the importance of using newer technology by sending the first official text to the recently expanded National Dating Abuse Helpline. Young people can now reach out to the Helpline via text or chat 24 hours a day, seven days a week. The Administration also issued the “Apps Against Abuse” challenge, to spur development of mobile applications to reach young people and keep them safe. The winning apps, Circle of 6 and On Watch, make it quick and easy to check in with friends about where you are and what you need, transmit your location via GPS, and connect you to the right resources to get help.

The public service announcement posted at the bottom of this post will air on the ESPN Networks, the FOX Sports Networks, MLB Network, and NFL Network and features sports stars like Jeremy Lin, David Beckham, Joe Torre, and Eli Manning. A message against violence communicated by men whom many men admire and view as strong should go a long way.

Zerlina from Feministing posted a touching article yesterday about how this video validates women like her who have suffered abuse. I know many women like her, and I’m certain we all do. Abuse, sadly, is still much more commonplace than it ought to be. It is right and fitting for men to call upon other men to stop abuse and violence, and I applaud the men who are communicating this message.

The message of 1 is 2 Many reminds me of one other thing I wish men would encourage other men to do: step up to the plate and be fathers. While women ages 16-24 suffer the highest rates of relationship violence, they are also women whose boyfriends are likely to leave them when they experience unexpected pregnancies. Do all young men do this? Absolutely not. One of my best friends stayed with his girlfriend and married her when she got pregnant at 20. Both of them were in difficult circumstances, and yet they made the strong choice to not only keep, but also personally raise their son. I am so proud of both of them.

However, it’s all too commonplace to hear of young men who would rather finish school than help their girlfriends keep their children. Or who would rather hand them the money for an abortion than help pay for diapers, formula, and clothes. Or who freak out when they hear their girlfriends are pregnant and insist that abortion is the only option. These men are not acting like men.

Just as a woman is a mother as soon as she becomes pregnant, so a man is a father as soon as his wife or girlfriend gets pregnant. There’s no way to get rid of your “parent status.” Abortion doesn’t change that. You just become a mother or a father with a dead child.

So what am I getting at? I’m asking men to consider mentoring and standing there with young guys who don’t know if they have the strength to help their girlfriends keep their babies. What would happen if older men stood alongside these young guys and showed them how to be strong? Told them they can do it? Let them know how much their girlfriends and babies need them – now more than ever?

We have a great lack of older men teaching young men how to be men. I’m not a man, so I can’t do this. I don’t know how to teach or ask young men to be strong, real, protective, and brave. But men know how to do this. Please consider fulfilling this role if you are a man. I know that some pregnancy centers, for example, look for men to volunteer to talk with the guy involved in a pregnancy situation. We need more of these opportunities and more men to take them.

The movie Sarah’s Choice (starring Rebecca St. James) has a powerful scene where an older man talks to a young man who has just discovered that his girlfriend is pregnant. He inspires the young man that he can do this. He is a father. He needs to take responsibility. He cannot ignore and hide from reality. And the older man shares how he made it, years ago, by choosing his girlfriend and their baby. Wow. I loved that conversation. If only every young man could hear it.

Yes, 1 is 2 Many. One abused woman is too many.  And one aborted baby is too many. They both need a strong man in their lives to stand up and say, “This is enough.” Please step up and speak out on this issue, too, men. For those who do and have done so for years, I applaud you. Despite what some may say, we need your voice desperately. Your are making a difference.