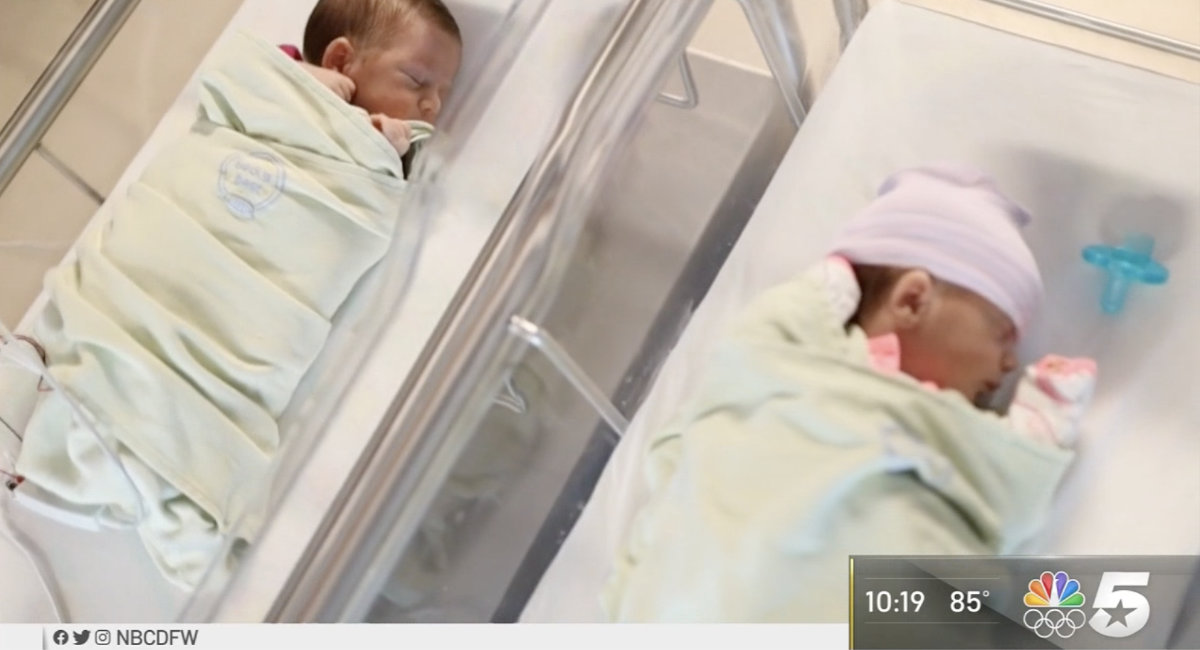 Texas mom Rima Aldebbeh got quite a shock when her first prenatal ultrasound revealed she was having twins, but that wasn’t her only surprise. The ultrasound also revealed that the two babies shared the same amniotic sac and the same placenta, a phenomenon known as monochorionic-monoamniotic twins, which is seen in less than 0.1% of all pregnancies.

“It occurs in less than 1% of all identical twin pregnancies and less than 0.1% of all pregnancies in general,” Dr. Julia Flowers, OBGYN and chairman of the department of medical ethics at Baylor Scott & White Medical Center-Grapevine told NBC 5. “It’s a very risky pregnancy. It’s high risk of having issues with the cords. As you can imagine, they’re in the sac together and it can have higher chances of becoming tangled and the blood supply can become cut off.”

Aldebbeh, who has three other children, shared that she was overwhelmed with the fear that something would happen to her preborn babies. “Too many things went in my head – especially the bad scenarios like, ‘What’s going to happen’ and ‘Are they going to live?’” she said. She also shared that it was her husband, Rami Ramadan, who kept her calm. “It’s OK. You have to just like pray and everything will be fine,” he would tell her.

Because of her high-risk condition, Aldebbeh was admitted to the hospital about halfway through her pregnancy. This was comforting to her family knowing that she would receive immediate care if needed, but also difficult because COVID restrictions meant they were separated for an extended period of time.

Dr. Flowers provided a statement to Fox News about Aldebbeh’s treatment during that time. “When our patients are faced with challenging and high-risk pregnancies, our team demonstrates love and compassion while applying training and best practice to provide the best outcome possible,” she said.

The twins, girls Raya and Naya, were eventually delivered seven weeks early for their safety. Despite the odds, they were healthy and are thriving. After a three-week stay in the NICU, they were discharged and are now at home with their family.

“We can’t be happier,” Ramadan told Fox News. “We made it through the hard time. Now the girls are finally here, they’re healthy, they’re out of the NICU, the family’s united. It’s a blessing.”