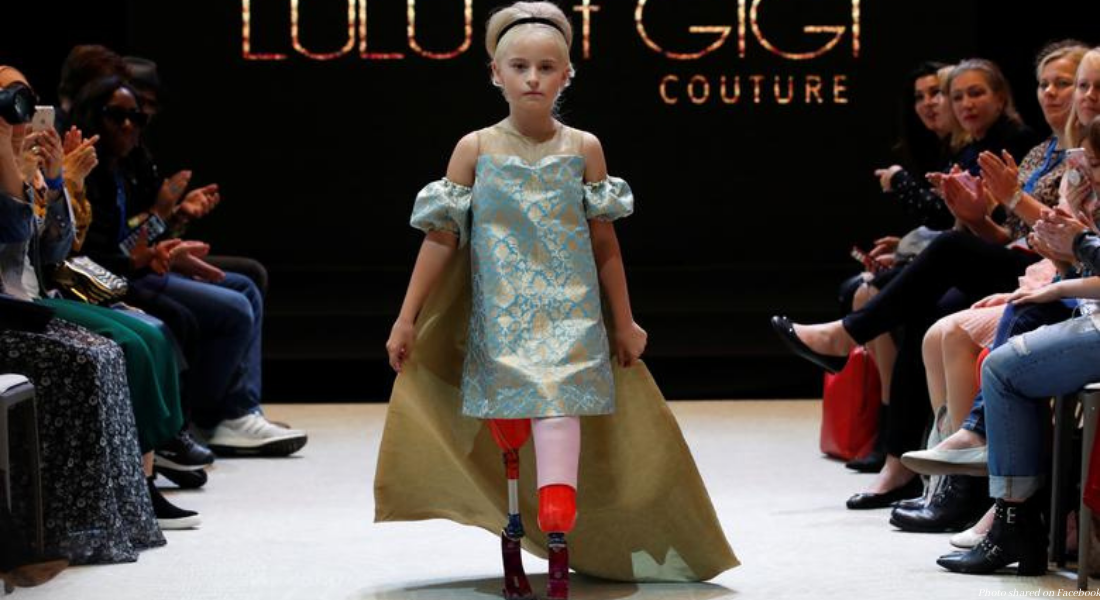 At 20 weeks, an ultrasound revealed that Daisy-May Demetre had fibular hemimelia, a condition in which all or part of the fibular bone is missing. At 18 months old, Daisy-May became a double amputee, but now at age 10, she is a runway model.

The young girl hasn’t let being a double amputee slow her down. She uses prosthetic legs — both every day ones and blades — participates in gymnastics, and began modeling at age seven. According to Metro UK, she has modeled for brands including Nike, River Island, and Boden, and was named as brand ambassador for the French-inspired clothing line Lulu et Gigi. As ambassador, she has walked the catwalk in New York, London, and Paris. She was the first amputee to model at the New York shows during New York Fashion Week in 2019. Her sister Ella also joined her on the catwalk.

“She inspired me by showing me who she was,” her father, Alex Demetre, told CNN. “She takes on life with a smile on her face and she does remarkable things. Whether it’s dancing, singing, she is a very special little girl.”

Daisy-May, who is one of five children, will also act as the ambassador for AmpCamp Kids, a one-week camp for children who have had a limb amputated. Six families will be given a vacation at a private villa and hear Daisy-May share her story of being a double amputee, hoping to inspire the other children to reach for their dreams.

“The end goal is to show these families that being an amputee isn’t the end of something,” Ben Lovell, also an amputee and the founder of AmpCamp Kids, said. “It can be the beginning of something great.”

“I’m incredibly proud of Daisy-May, she has done so well with her modeling and enjoyed many opportunities I never dreamed she would have,” Demetre said. “I’m delighted she is our ambassador for AmpCamp Kids and that she will be able to help other children in a similar position to herself. I really struggled after Daisy-May had her legs amputated, it was a very dark time for me and I nearly contemplated suicide. As part of the week, I’ll also talk to the parents and show them that it is difficult but their children can still thrive and live a full and happy life.”

Daisy-May told the UK show This Morning that she enjoys modeling because she likes “the make-up and the clothes, and spending time with Dad.”

Fibular hemimelia is a rare congenital condition where children are born with a short or missing fibula. Treatment often depends on the severity of the condition, with some children merely needing physical therapy, while other, more severe, cases require amputation. Regardless of treatment, children with fibular hemimelia or any other disability are just as capable of leading full, productive, happy lives as their able-bodied peers.