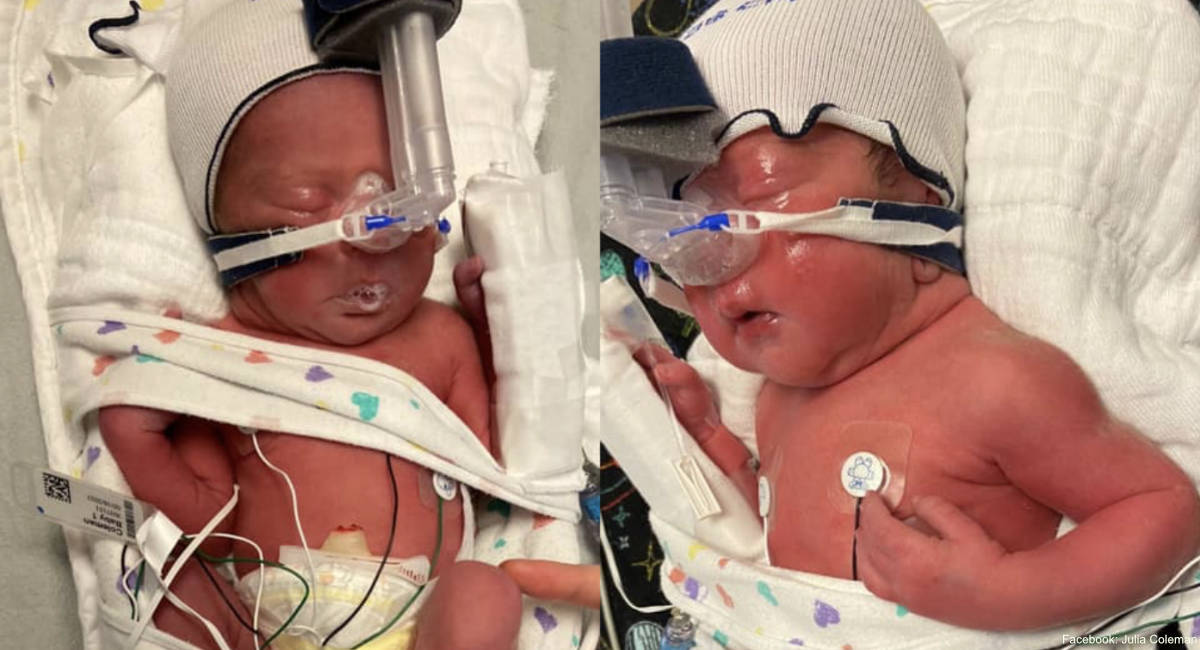 Julia Coleman, the youngest Minnesota state senator in office, recently spoke with The Catholic Spirit about her experience balancing marriage, motherhood, pregnancy, and her political career. She has three young sons, including identical twin newborns who faced a challenging pregnancy that led doctors to advise Coleman and her husband Jacob to abort one of them.

During her pregnancy with Charles and James, Charles was diagnosed with Selective Intrauterine Growth Restriction (sIUGR) and was not growing properly, and both boys were also monitored for  Twin to Twin Transfusion Syndrome (TTTS), which can be life-threatening for one or both babies. Coleman also began to show signs of preterm labor and she ended up working from the hospital.

“[D]octors have been concerned about two different issues for our boys — Twin to Twin Transfusion Syndrome (TTTS), requiring us to check on their fluid levels two to three times a week, and Selective Intrauterine Growth Restriction (sIUGR), where we check in on their size once a month,” Coleman wrote on the twins’ Caring Bridge page.

“We are happy to share that regarding the TTTS, things have been remarkably improving, with Charles doubling the amount of fluid he has,” she continued. “James has also seen a large increase in fluid, which pushes him way, way over the edge of the maximum amount they want to be seeing, but his big, strong heart seems to be handling the extra fluid just fine.”

Despite this good news, Charles was measuring too small. He was at the seventh percentile and doctors said he needed to be at or above the 10th. As a result, his organs had begun to suffer. In March, the couple was told that there was a 35% chance Charles would be born with lifelong complications and there was a chance that he would die in the womb possibly causing James to suffer a stroke and die as well.

Doctors said Charles would need to be delivered before the 28-week mark and that they could abort him to allow James more time in the womb, but the couple refused.

“At one point, doctors told us we could increase James’ chance of survival if we killed Charles,” Coleman told The Catholic Spirit. “Jacob and I both insistently said: ‘That’s not on the table.’ We were never going to choose between our kids. We’re incredibly pro-life. That’s when you lean on your faith and you trust that God has a bigger plan.”

READ: Miracle preemie twins finally come home: ‘They had a 10% chance to live and they did it’

After choosing life for both of their boys, the couple “watched a miracle unfold before our eyes.” By April, Charles had jumped from the seventh percentile to the 13th. He was no longer showing issues with fluid or blood flow.

“The boys are defying all expectations, all statistics, all odds against them,” wrote Coleman. “We are firm in our belief that it is the countless people praying for them that is making this a reality.”

Throughout her pregnancy, Coleman said she was hoping to make it to 33 weeks to both give the boys a better chance at surviving and because it was when the legislative session would come to a close. On May 18, at 33 weeks, the boys were delivered. Though doctors didn’t know if they would survive, they only spent 27 days in the NICU. The same day Coleman was able to bring them home, she also worked during a legislative special session.

“It’s a mixed bag,” she said about her emotions that day. “We had to be so strong to get through all the scary parts. We didn’t know if the boys were going to make it more than a few minutes or hours upon their birth. The doctor has since told me that there were times she looked at their scans and didn’t think they’d ever make it home. I’m so grateful, and I’m going to remember that when I’m up at 2 and 4 this morning.”

Coleman didn’t only face the fear of losing her boys during her pregnancy, but she also dealt with pushback from people who don’t believe mothers can have a career.

In January, she revealed she had received a message from a “very angry woman” who told her, “Congratulations on your pregnancy. You lacked transparency and hid this from the voters when you were running. And now instead of working you’ll be on parental leave.”

Coleman fired back, “1) I work nonstop while pregnant and postpartum and intend to do the same with my twins. 2) It’s no one’s business if a woman is pregnant, candidate or not, until they are ready to share the news. Given the issues I had with my son’s pregnancy, I wanted to make sure the baby (surprise, babies!) were safe and healthy. 3) Women deserve better than this. We are damned if we do and damned if we don’t. So do what’s best for you and yours Mamas.”

She told The Catholic Spirit that there were women telling her she was “relinquishing her role as a mother by working outside the home.” However, she credits how busy her job and young son Adam kept her with helping her get through the emotional pregnancy and having something else to focus on.

“When you know you’re at a point in your life when you’re feeling called to be where you are, when you feel that you’re on the right path, the criticism rolls off your back,” she explained.

For Coleman, being a mom and a volunteer in her community and also being able to spend half the year as a state senator allows her to be “fulfilled in many different ways.” Women need not choose between their children and their goals.