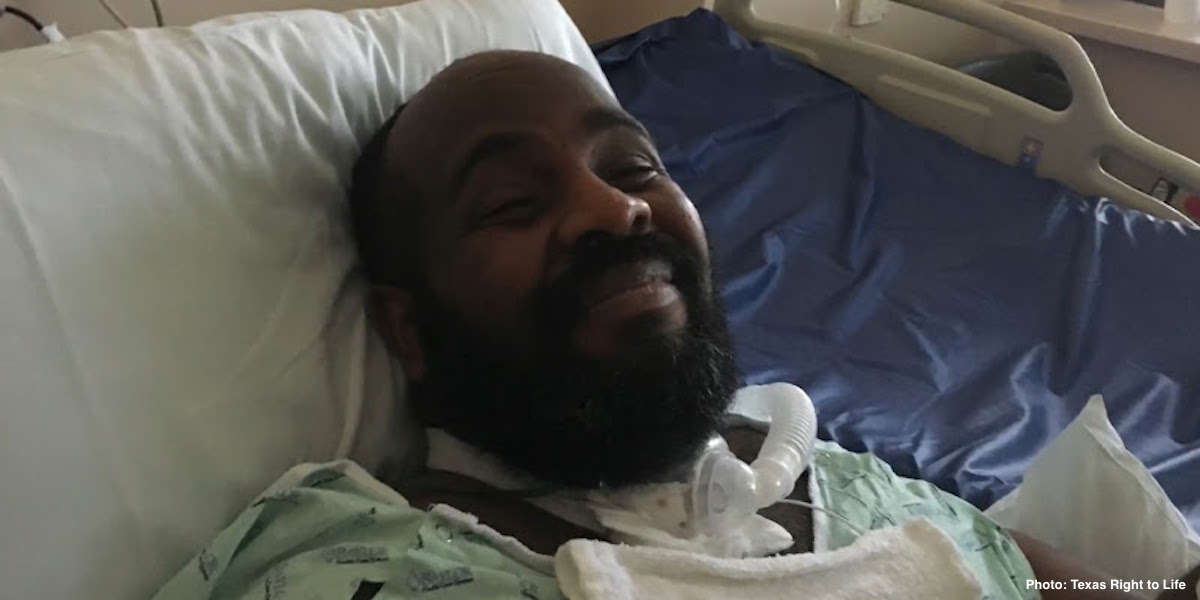 Michael Hickson, 46, has died in Texas after doctors refused to treat him for COVID-19 because of his disability.

According to Texas Right to Life, Hickson became a quadriplegic in May 2017 after going into sudden cardiac arrest while driving his wife Melissa to work. He received CPR but suffered an anoxic brain injury from the loss of oxygen to his brain. Since that time, he has been conscious and alert, responding to jokes, laughing, shaking his head, singing, and puckering his lips when his wife asked for a kiss over FaceTime. See the video below:

His wife and five children have been by his side as he worked to recover. Then in 2020, he contracted COVID-19 from a staff member in his nursing home and developed pneumonia. He was hospitalized at St. David’s South Austin Medical Center, but doctors there refused to treat him, allowing him to die.

In a recorded conversation between the doctor and Melissa, she was told that he would not receive treatment due to his disability:

Doctor: So as of right now, his quality of life — he doesn’t have much of one.

Melissa: What do you mean? Because he’s paralyzed with a brain injury he doesn’t have quality of life?

While Melissa and another family member were in court regarding who would be Hickson’s permanent guardian, a judge named the organization Family Eldercare as a temporary guardian and that organization approved the doctor’s order to not treat Hickson and instead to place him on hospice. Melissa had zero say in this decision.

“… [A]t this point, we are going to do what we feel is best for him along with the state and this is what we decided… this is the decision between the medical community and the state,” the doctor told her.

As a result, Hickson was refused food or treatment for six days and died on June 11, 2020 from untreated illness.

“I’m struggling to understand how and why this could ever happen,” said Melissa. “I lost my best friend, my better half, the other half of my heart. I was stripped of my rights as a wife, and left helplessly watching my husband be executed. I now have no husband, a widow at 47. My children left with no father to celebrate Father’s Day. All taken away from us. I have no words to express how I feel today except hurt, angry, and frustrated.”

Texas Right to Life is asking Texas lawmakers to step up and protect vulnerable patients like Hickson from denial of treatment against the wishes of the patient and family. Cases like this have been on the rise in the state since the unethical 10-day rule was implemented.