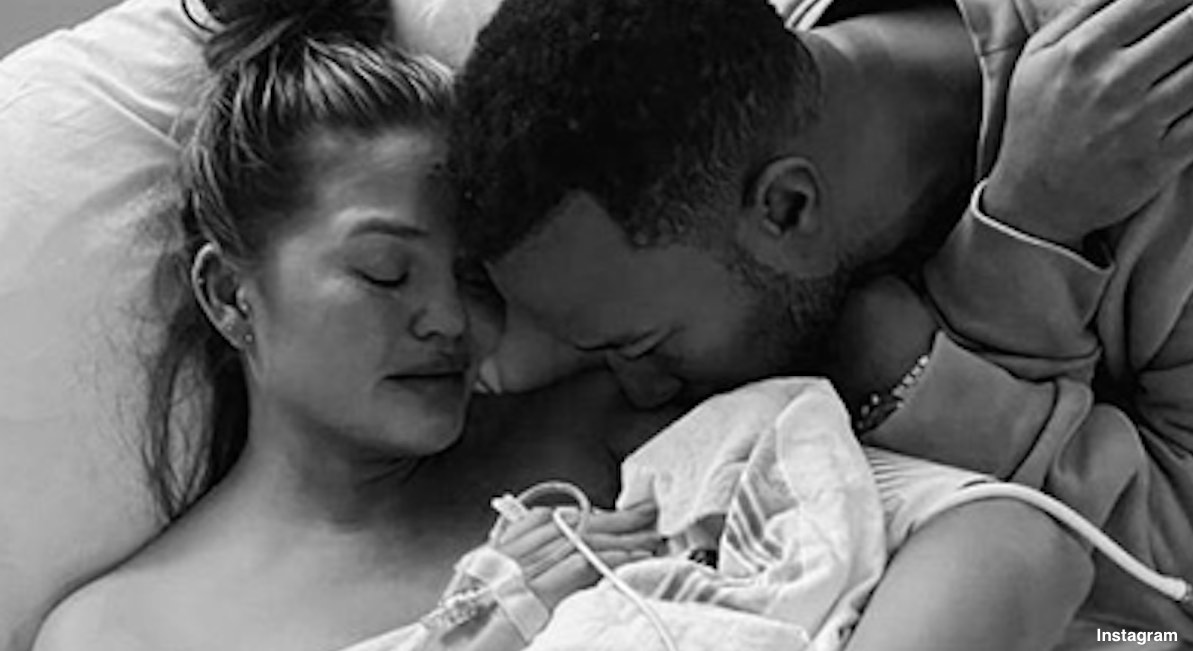 TV personality Chrissy Teigen is now claiming that the pregnancy loss she suffered two years ago was actually an abortion, and that this realization was a surprise to her. Yet according to the definition of induced abortion, it appears Teigen is mistaken. An induced abortion is defined by The Centers for Disease Control and Prevention as “an intervention performed by a licensed clinician […] that is intended to terminate a suspected or known ongoing intrauterine pregnancy and produce a nonviable fetus at any gestational age.” (emphasis added)

Teigen and her husband, musician John Legend, used fertility treatments to have their first two children, so when they became pregnant with son Jack naturally, they were joyfully surprised. Tragically, after dealing with issues with the placenta, Teigen was admitted to the hospital due to bleeding. She shared via social media that Jack appeared to be doing well, but just a few weeks later, doctors were unable to stop the bleeding, and though they tried to save him, Jack passed away during or shortly after a preterm delivery.

At the time, Teigen wrote on Instagram, “We are shocked and in the kind of deep pain you only hear about, the kind of pain we’ve never felt before. We were never able to stop the bleeding and give our baby the fluids he needed, despite bags and bags of blood transfusions. It just wasn’t enough.”

She also wrote, “Jack worked so hard to be a part of our little family, and he will be, forever.”

READ: Definitions matter: Is an ‘abortion to save a woman’s life’ truly an abortion?

Now, Teigen is attempting to rewrite this heartbreaking loss as an induced abortion — which is also tragic, but very different. Speaking at social impact agency Propper Daley’s “A Day of Unreasonable Conversation” summit recently, she said, “Two years ago, when I was pregnant with Jack, John and my third child, I had to make a lot of difficult and heartbreaking decisions. It became very clear around halfway through that he would not survive, and that I wouldn’t either without any medical intervention.”

She continued, “Let’s just call it what it was: It was an abortion. An abortion to save my life for a baby that had absolutely no chance. And to be honest, I never, ever put that together until, actually, a few months ago.”

However, an induced abortion is an act in which the intent is to produce a dead child. Based on the information Teigen has shared, it appears that neither she or Legend, nor the doctors, intentionally caused Jack’s death. His death was a tragic result of the emergency medical situation that was occurring at the time.

READ: Chrissy Teigen writes about losing her son at 20 weeks: ‘I can feel the pain all over again’

Teigen appears to be conflating induced abortion with miscarriage and preterm delivery. In an induced abortion, specific procedures are used to ensure the baby is dead when he is born or that he dies shortly after birth — or if he does survive the abortion, that he is left to die without any medical assistance — this is what pro-life laws restrict. Preterm delivery is an act that is carried out during medical emergencies when doctors are trying to save the mother, the child, or both. Based on Teigen’s account of Jack’s birth, there was nothing doctors could do to save him despite their attempts, he was too young to survive outside the womb, and her life was on the line due to severe bleeding.

AAPLOG notes in its literature, “There is a night and day difference between induced abortion and separating a mother and her unborn child for the purposes of saving a mother’s life (preterm parturition). There are times when separating the mother and her unborn child is necessary to save the life of the mother, even if the unborn child is too premature to live. In those tragic cases, if possible the life of the baby will be attempted to be preserved, and if not possible, the body of the unborn child is treated with respect, recognizing the humanity of the life which is lost in the separation. In contrast, the purpose of an induced abortion is to produce a dead baby.”

And according to The Dublin Declaration on Maternal Health, which was written and signed by a select panel of the Committee on Excellence in Maternal Healthcare, “As experienced practitioners and researchers in obstetrics and gynaecology, we affirm that direct abortion – the purposeful destruction of the unborn child – is not medically necessary to save the life of a woman. We uphold that there is a fundamental difference between abortion, and necessary medical treatments that are carried out to save the life of the mother, even if such treatment results in the loss of life of her unborn child. We confirm that the prohibition of abortion does not affect, in any way, the availability of optimal care to pregnant women.”

Editor’s Note 9/22/22: This article has been updated to include the fact that some babies do not die during an induced abortion, but survive and are left to die after birth without any medical intervention. The title was also changed due to the unknown full story of Jack’s birth as either miscarriage or preterm delivery. Other changes were made with quotes added for clarification.

This article was reviewed/verified for accuracy by representatives of the American Association of Pro-Life Obstetricians and Gynecologists.