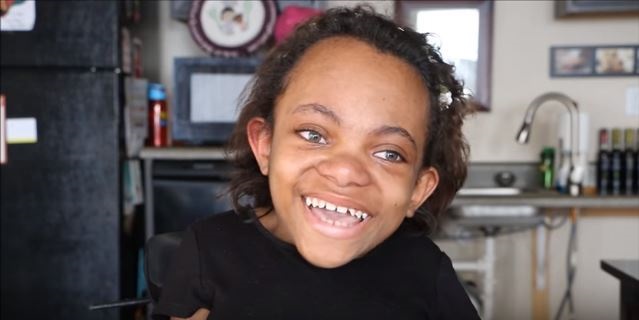 Born with Osteogenesis Imperfecta, commonly known as Brittle Bone Disease, 13-year-old Anicee spent the first seven years of her life in an orphanage until the blessing of adoption gave her a home. Finally, the day she had been waiting for arrived: her parents, both of whom also have Brittle Bone Disease, adopted her after two years of waiting, and came to the orphanage to bring her home.

“Growing up in an orphanage is pretty difficult,” Anicee told Chris Ulmer of Special Books by Special Kids. “The kids usually don’t pay attention to you that much especially when you’re different from them.”

She and her mother both remember the day they met.

“I was so ready,” Anicee agreed. “[…] It was just so amazing. I was happy to have a family and I could just see the gates opening and I knew that everything was going to change. And I was happy.”

Anicee says it’s hard to talk about the first years of her life because her birth mother wasn’t there, and now that she has a family she doesn’t like to think about her past. She says that she has a lot to be thankful for, especially her mom, dad, and grandma.

“And my mom… She pushes me to do things. She pushes me to be myself. I think that’s wonderful and amazing,” she said. Anicee, who has broken or fractured bones close to 200 times, says that her father reminds her to be herself.

Anicee says her grandmother is the one who makes her laugh. She calls Anicee “the joy” of her life.

“The minute I saw her I fell in love,” said her grandmother. “I knew that you were it. That she was gonna be my granddaughter. I hugged her and smooched her all around.”

Anicee’s parents chose to pursue adoption for her because they wanted to share their lives with a child with Brittle Bone Disease like them, and they knew that they could help her to reach her full potential.

READ: Family of two girls with Down syndrome say ‘life is better’ with them in it

“I think Lisa and I have a very unique perspective on how we grew up in the world,” explained Anicee’s father, Chris. “I think we wanted to share that with our child in more than just sharing it with stories, but to help her through the same struggles that we had to deal with when younger. […] We just really wanted to impart some of our life wisdom with having OI.”

“Chris and I both have had so many experiences that we wanted to share that with a child, and maybe make it easier – growing up – for them,” said Lisa.

Her parents, knowing what they struggled with as children and teens, work hard to ensure that Anicee is able to overcome obstacles. They made sure the counters and stove are low enough that she is able to reach them to be more independent. They provided her with a service dog to help her retrieve items that are out of reach and do everyday tasks that other people take for granted.

They also want their daughter to be happy, and to be passionate about school and her future career.

Anicee hopes that people will view her as equal and that parents will teach their children not to make rude comments. She wants people to stop talking to her like a small child or kneeling down to talk to her. She wants them to stand and to speak to her like they would any other teenager. She’s grateful that because of adoption, she has a family who understands her.

“Family is so so important. My mom is my idol, my grandma, and my dad. If they were not in my life I don’t know what I would do,” she said.