When Annie Reid was pregnant with her third child, she had no reason to think this baby might have Down syndrome. But at her 20-week ultrasound, she says doctors found “several ‘soft markers'” for the condition, along with a heart defect. A few weeks later, Annie and her husband Jade learned that their little girl’s heart defect was an “AV Canal defect,” one which Annie says “is common for children with Down syndrome.”

But rather than risk miscarriage by having an amniocentesis performed just to confirm the diagnosis, the Reids decided they would deliver their baby girl at a hospital equipped to handle any heart problems she might have. And soon, Ollie Faith was born. Annie told Live Action News:

I was induced at 39 weeks and delivered her at St. Louis Barnes Hospital. Upon birth, we confirmed that Ollie did in fact have Down syndrome. She had an echocardiogram shortly after birth but it was determined we could wait for heart surgery until she grew to be around 11 pounds. Within the first month, she was in heart failure, and she had her open heart surgery at four months of age [at] a little over 10 pounds in weight. 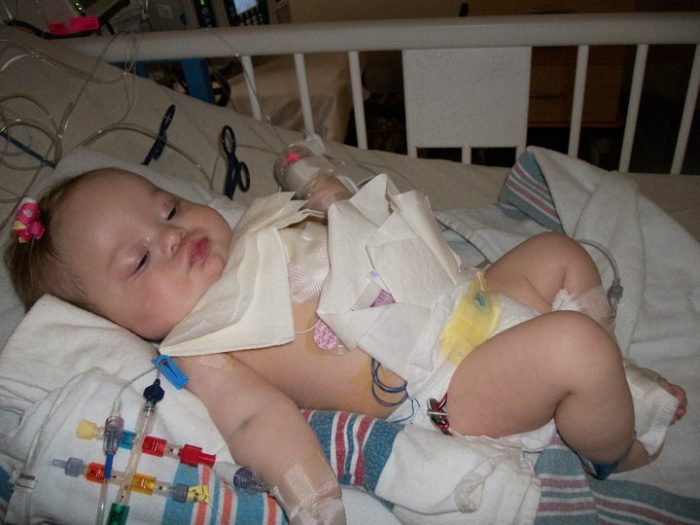 Since that time, Ollie has come a long way and has made great strides. She’ll soon start first grade. Annie says Ollie’s “heart is healthy and she is thriving now,” but up until about age three, the family’s greatest challenge was “juggling medical appointments and therapies.” The struggle was worth it.

Now, their greatest challenges “really deal with other people’s limiting beliefs about Down syndrome,” Annie says. So often, people “only see a diagnosis when they meet her, and they never see Ollie.”

Because of Ollie, Annie and her family have become advocates for children like her, choosing “to go into the schools and teach about what Down syndrome is to other children.” Annie hopes that doing this will get rid of “the teasing and name calling that is tied to special needs.” 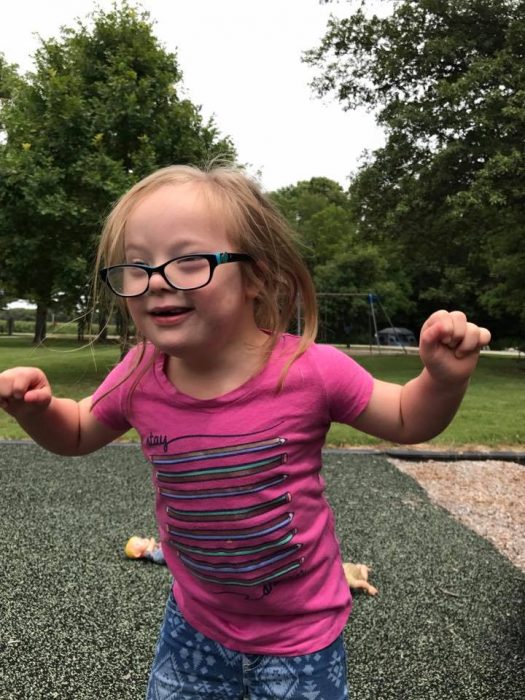 Annie has also taken this advocacy to social media, where she champions the idea that every life has value, and that no one should be looked upon as “less than” simply because they have challenges or disabilities. Most recently, Annie has started a hashtag campaign, #LIFEisbetterwithyou, in response to the horrific news that Iceland aborts nearly 100 percent of all babies who have Down syndrome — and in response to some terribly cruel comments from random strangers on the internet, who claim children like Annie’s would be better off aborted:

Our joys are abundant. Ollie Faith has the most incredible personality. She spreads joy like wildflowers every where she goes. She has a pure heart, and wants to make everyone in the room feel special and loved. Humor is one of her best characteristics as well. It’s truly impossible to have a bad day when Ollie is around!

The family is also grateful for the support they find in the Down syndrome community around the world. Annie says, “[I]t is a great big family and we have developed friendships with families around the world that also have children with ‘designer genes.'”

Ollie has changed the entire Reid family’s lives for the better, including big sister Aubrie and big brother Everett. And Annie says that having Ollie in their lives also changed their perspective on some things… like adoption.

“Shortly after Ollie’s birth, our eyes were opened to what happened to children born with special needs in other places of the world. Our hearts were broken and burdened for these children,” says Annie. “Their only crimes in life were to be born with an extra chromosome or other special needs. Some of these children are tied to beds, abused, starved, and the list of horror goes long. Many of them age out of their orphanages into adult mental institutions or onto the streets at very young ages, in which they can’t survive.” 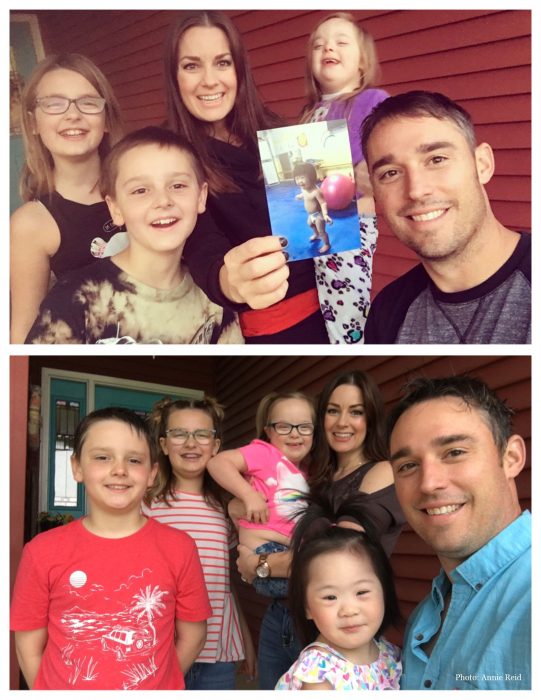 The Reid family, before Edie Joy’s adoption and after

For a while, the Reids supported Reece’s Rainbow, an organization dedicated to helping special needs orphans. But after a few years of “pray[ing] adoption would be a door opened to our family at some point,” they knew it was time.

“In July of 2016 we decided we were ready to move forward with adoption and to add another child with Down syndrome to our family,” Annie told Live Action News. She had seen some photos and a video of a little girl from China on a private Facebook page dedicated to orphans with Down syndrome.

“The moment I saw her video, I knew she was our daughter,” Annie says. “We were able to bring her home from China within 7 months of starting the process.” And despite the fact that there are some difficult days, which is to be expected, little Edie Joy, as the Reids named their new daughter, has made an amazing transition into their family.

Annie knows all too well the fears parents can have when learning that their child has Down syndrome. “I know it is so scary at first, and [parents] may grieve the life they had imagined for their child for a while, but they have actually been given one of the biggest gifts!” Annie says, adding, “Their child will have an amazing and full life, and… our children are capable of anything when they are pushed and encouraged. Life is about to change in the best ways.”

Annie says her family and other families of children with Down syndrome are “a part of the club that many of us refer to as #TheLuckyFew.”

As for adoption, it has its own challenges, Annie says, such as dealing with “the trauma that happened to the child” before being adopted — over and above any special needs the child may have. “[B]ut when is parenting ever easy?” she asks.

For families considering adopting a child with special needs, Annie has some advice: “Go for it!.. Do your research, look at special needs, and determine what you think you are comfortable with, but realize not all files are 100 percent complete and accurate.” She also recommends “finding some books about adoption and attachment so you go into the adoption with your eyes wide open….”

Keeping our eyes wide open is good advice to heed… and for the Reid family, it’s clear that they’ve also kept their arms wide open.

And those arms have been filled with blessings.