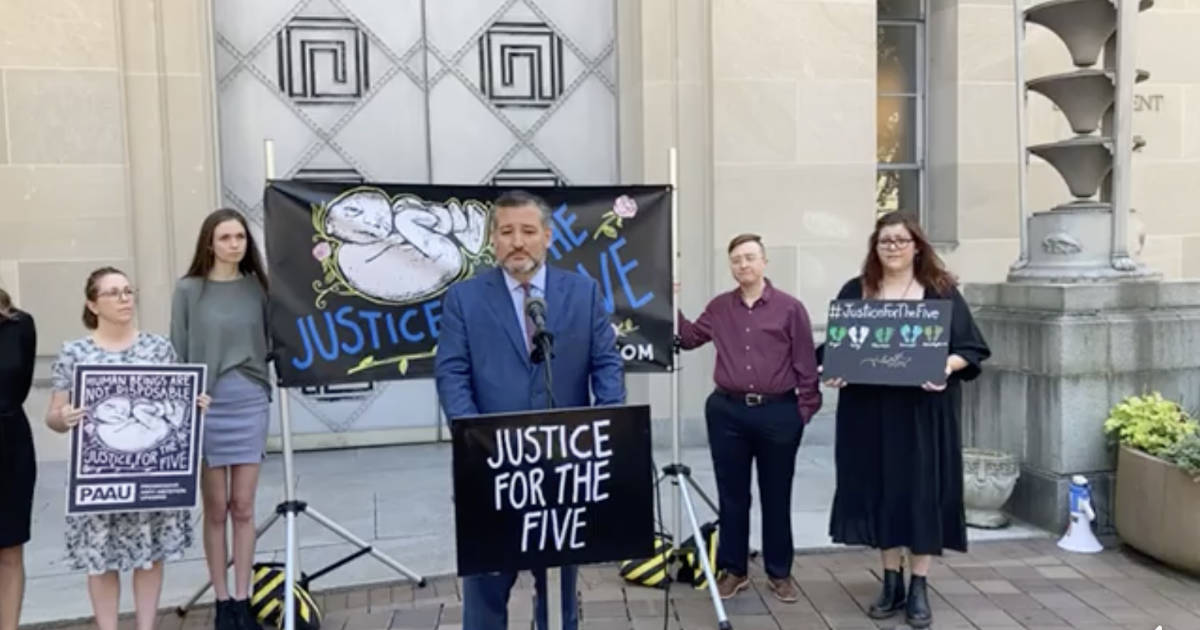 Senator Ted Cruz (R-Texas) joined pro-life organizations including Progressive Anti-Abortion Uprising (PAAU) in front of the U.S. Department of Justice (DOJ) on June 9, to demand justice for the five babies who were discovered in a medical waste box in March outside of Washington Surgi-Center, an abortion facility that commits late-term abortions in Washington, D.C. He announced that authorities will allow a private autopsy to be performed.

“We’ve learned that an attorney for PAAU has confirmed that the D.C. medical examiner has agreed to allow a private pathologist to examine the bodies of the five babies,” Cruz said, according to Catholic World Report.

“This is a step in the right direction,” he added.

According to Catholic World Report, PAAU’s media coordinator, Caroline Smith, later confirmed this announcement with the Catholic News Agency, saying that PAAU’s lawyer had reached a verbal agreement with the medical examiner’s office.

In addition to PAAU, Cruz joined pro-life groups Students for Life Action, Students for Life of America, Americans United for Life, Rehumanize International, and Concerned Women for America, in calling for the DOJ to investigate the deaths of these five children, who may have been killed by illegal means. However, Attorney General Merrick Garland has ignored all requests for autopsies to be performed on the babies.

“Senator Cruz and I both recognize the brutality of late-term abortion and the critical need for immediate action,” said Terrisa Bukovinac, founder and executive director of PAAU, in a press release. “These babies found by myself and Lauren Handy are likely victims of federal crimes at the hands of their killer Cesare Santangelo. It’s time for Merrick Garland to uphold the duties of his office by investigating these deaths and holding their killer accountable. We’re grateful to Senator Cruz for being a voice for the voiceless murdered children.”

Bukovinac and Handy, PAAU’s Director of Activism, discovered the bodies of the five babies inside a medical waste box along with 110 others who had been killed earlier in pregnancy. Experts believe the five older babies were likely old enough to have survived outside the womb. One of the babies, named Harriet by the pro-life activists, had an incision on the back of her neck that experts said could indicate the use of the federally-banned D&X abortion procedure, more commonly known as “partial-birth abortion.” Other intact babies found in the bag could have been killed by infanticide after surviving the abortion procedure, according to experts.

He continued, “Violence is always wrong and we should enforce the criminal law against anyone committing violence whether you agree with their politics or disagree with their politics. Violence is always unacceptable and in the case of these unborn children, the violence that was visited upon them, that took their lives, it is against the law and just because a politician disagrees with the law doesn’t mean he or she has the right to ignore it.”

A 2013 Live Action undercover investigation of Washington Surgi-Center revealed that abortionist Cesare Santangelo said his method of killing preborn babies does not involve use of an injected feticide to kill the baby before delivery, but instead, he cuts the umbilical cord and waits for the child to die by cardiac arrest. He also said if a child survived an abortion at his facility, he and his staff “would not help it” to survive.

Read the Justice for the Five timeline here.