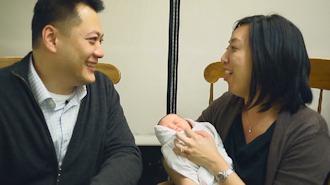 Faithit.com highlighted the story of Mr. and Mrs. Chen, a couple that had been trying for nine years to have children of their own but were not able to.  Their decision to adopt brought them on an unforgettable journey to California.  When they arrived at the airport in California, Mrs. Chen was excited that their dream was about to become a reality, “In a matter of hours, what I have always, for so many years, have wanted and prayed for, is going to happen.”

Mr. Chen spoke of the similarities between them adopting their son and his spiritual adoption into the family of God:

Anytime I think about adoption, I think about my spiritual adoption, about how Jesus went to infinitely grater lengths to adopt me to the family of God.  What a privilege it is in a smaller way, in a human way, live out some of the truth of the Gospel.

Upon seeing the baby first the first time, both parents were in tears.  The waiting was over; they now had a son!  Mrs. Chen called him “the most beautiful baby I have ever seen.”  As Mrs. Chen shared:

The nurse showed us that even on his little tag that his identity was “Baby Boy”—he didn’t belong to anybody, he didn’t have a name.  But in the very instant where the nurse looked at us and said, “So what’s his name,” and we both said together “His name is Jacob”—in that very moment, instantaneously, he belonged to us, he had a name, and he was known.

When they saw him they realized that this was the culmination of all of the years of waiting and praying:

We prayed for a child, but in our prayers, there wasn’t a face and there wasn’t a name.  We were just praying for a child, just asking God to give us a child.  It wasn’t just a child that we were waiting for.  It wasn’t just a child that God intended to bring into our family.  And those years of waiting weren’t just because God decided he wanted us to wait an arbitrary number of years or go through an arbitrary experience.  All those years and all the waiting and all those prayers were for him—for Jacob—for our son.