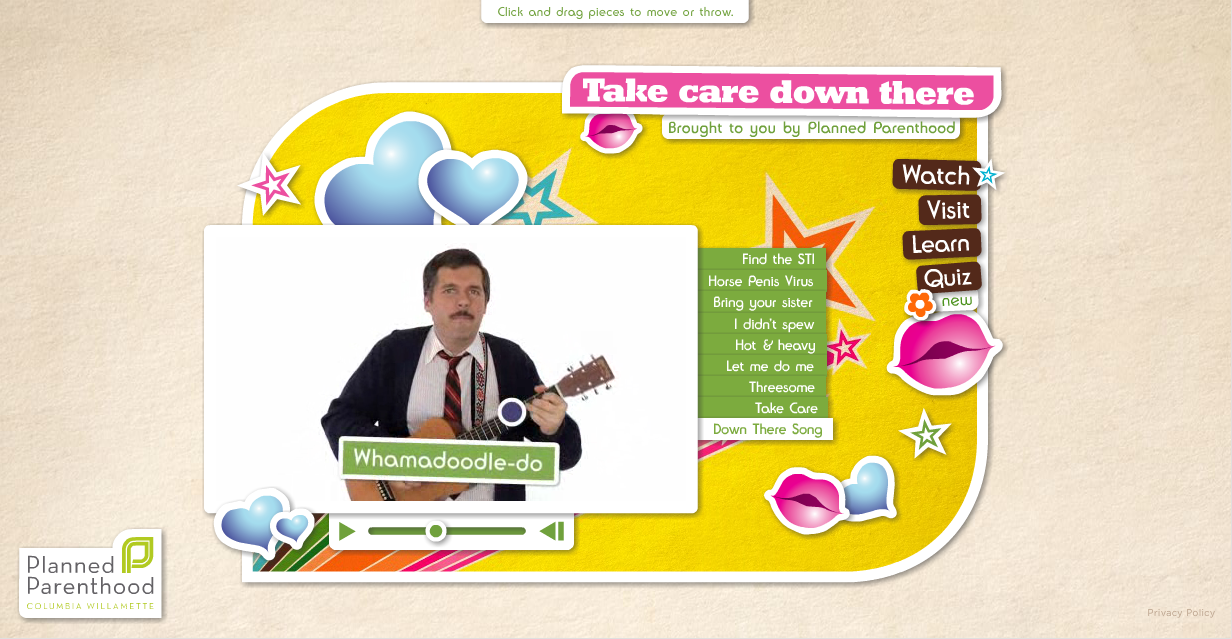 Live Action is most recently engaged in uncovering the dangerous sex agenda endorsed by Planned Parenthood and its affiliates. Adding more fuel to the fire enlightening the public on how Planned Parenthood is supporting sexual-deviance and erotomania is an interactive “education” website (takecaredownthere.org), rife with off-color, sexual innuendo to lull its viewers into its objectionable message.

Upon entering into this mature-themed site, created by Planned Parenthood of Columbia Willamette, one is greeted with this curious claim:

If that’s true, then why have their workers suggested torture-sex to a minor, advised sex-traffickers on how to continue their exploitation of girls, and permitted statutory rape to go unreported? There is too much evidence that proves just the opposite of what Take Care Down There is proffering for the above proposition to be true. With Planned Parenthood’s above statement shown to be specious, what is the real message behind this sexually-comedic website produced by such a notorious abortion-advocating and sado-masochism-promoting organization?

To determine that, the material that Take Care Down There presents must be investigated.

Take Care Down There ambiguously informs its viewers that “this site is intended for mature teens and adults only,” as if to warn the public that younger audiences should be protected from this content that Planned Parenthood poses as “education” and “reproductive health care.” However, the Planned Parenthood of the St. Louis Region and Southwest Missouri asserts that this site contains “[h]ilarious videos, songs, and more for teens”, seemingly innocent and absent of any age-disclaimer or warning.

After uncomfortably watching all the videos, one is now ready to take the short, multiple-choice Pop Quiz. Despite the site’s rather raunchy content, this quiz does contain some interesting information, like 50% of Americans will contract an STD before the age of 25, and even going so far as to admit that practicing abstinence is “the surest way to stay STD-free.” Yet, the main message that is implicit to this site is not the beauty of an abstinent or faithful lifestyle, but sexual entitlement to “protected” promiscuity— that any sexual activity is good and healthy if it is protected and consensual. 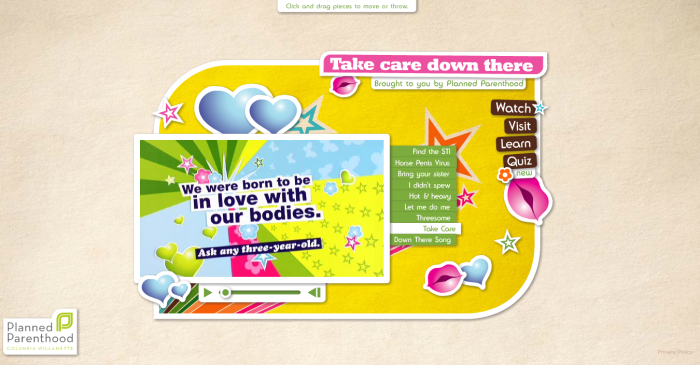 “We were born to be in love with our bodies.”

“Starting today, let’s make a pact: To make our body our best friend.”

Are these ideas and the philosophies which undergird them (e.g. sexual autonomy, moral positivism; cf. IPPF’s Declaration of Sexual Rights) conducive to proper human development and social wellbeing? Certainly the reverse of these statements would be horrendous, but a self-centered sexual ethic still has its problems: with one identifying himself/herself to be sexually autonomous (derived from the idea of the individual’s ultimate autonomy) there is no perceived moral authority outside one’s self, every person is his/her own god, or more aptly stated, sex-god; there is nothing other than physical force to prevent a person from “loving” himself/herself to the exclusion, neglect, and even destruction of others (e.g. infidelity and abortion).

With the above moral conundrums spawned by Planned Parenthood’s idea of sexual entitlement, should this abortion-mill’s advice on how to Take Care Down There even be considered education and perpetuated by U.S. taxpayers?

While there are some take-aways from Take Care Down There, such as the meaning and social prevalence of HPV, this “sex-education” and “sexual ethic” that Planned Parenthood is pushing is too immoral and misleading to be funny, let alone beneficial to true manhood, womanhood, or parenthood.