“The survey shows that abortion activists have moved in deceptive and dangerous ways to channel their anger over the impending Supreme Court leak that showed a potential overturn of the Roe v. Wade decision. In recent days, abortion extremists groups have amplified national calls to action to attack pregnancy help organizations—places that exist to provide pregnant women with care and resources,” Heartbeat’s release emailed to Live Action News states.

Of the 137 responses to the Heartbeat International’s informal survey, more than one in six pregnancy resource center (PRC) organizations in over 20 states reported an increase in incidents targeting their organizations. These range from fake online reviews to vandalism, including the destruction of property — all occurring since the beginning of May, the report claims.

Of the organizations reporting incidents:
● An alarming 20% reported property damage
● More than 30% have seen an increase in fake online reviews
● 20% have received angry calls
● 10% have experienced protests outside their locations
● 6% have received threats.

The anonymous group Jane’s Revenge has taken credit for serious criminal acts directed at PRCs and other pro-life centers, including arson and vandalism. The domestic terrorist group recently went further and called for a “Night of Rage” when the final opinion is released by the Supreme Court on Roe. In addition, Jane’s Revenge is inciting their allies to “paint, to burn, to cut” in retaliation against groups who do pro-life work.

As a result, multiple pro-life pregnancy centers across the nation, including some associated with CareNet and Birthright in addition to Heartbeat International, have been targeted. Live Action and Live Action News have documented many of these horrific acts of terrorism here. 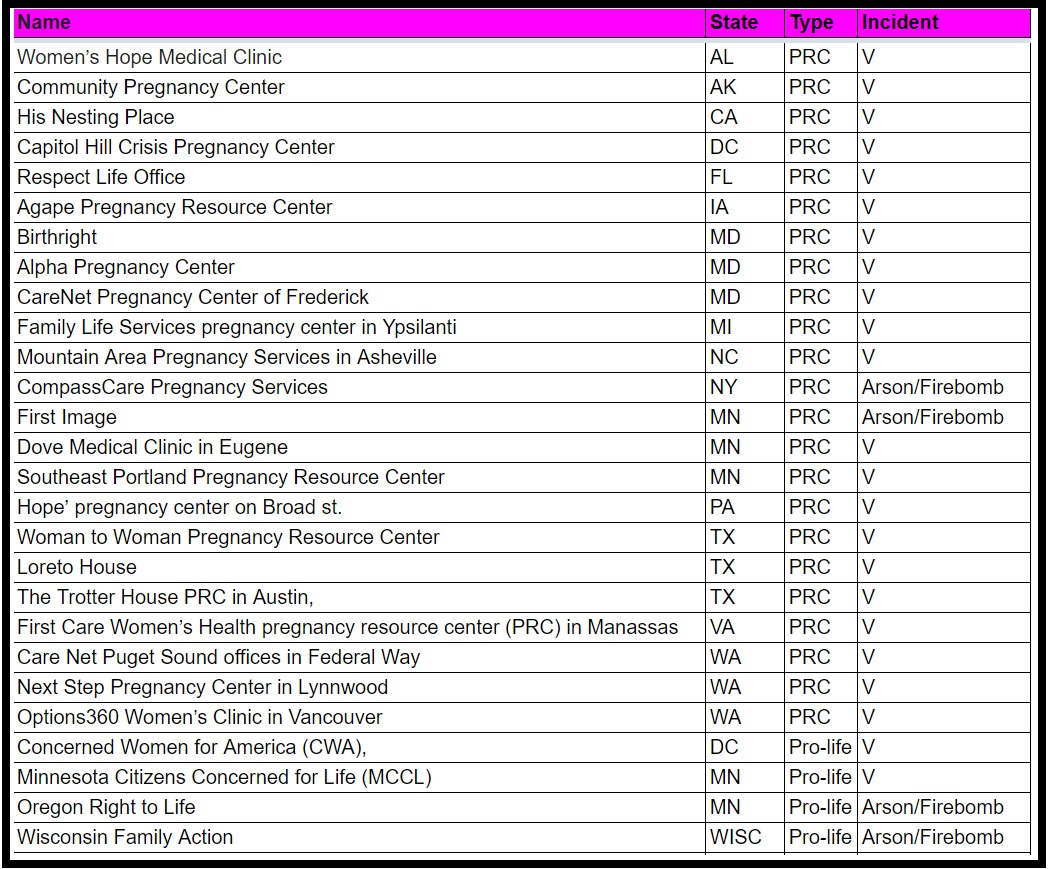 Pro-abortion terrorists are not helping women make the choice they desire when they attack PRCs, which offer free services to protect vulnerable women and children from violent abortion.

“These pro-abortion vigilantes claim to be standing up for women while simultaneously obstructing women from receiving the pregnancy care they seek,” he said. “The time these centers must close in order to clean up paint or replace broken windows is time now that they aren’t able to serve women and families. The women these vandals claim to care about are now being denied care due to what amounts to a temper tantrum.”

As Planned Parenthood and other abortion facilities begin to shutter, and abortion advocates plan their “summer of rage,” it is PRCs that are stepping forward and strategizing to actually assist and help the vulnerable. Women like Ashley praised the PRC that helped her reverse her abortion after she was sold the abortion pill. She described the moments after she took the deadly pill, saying, “I just felt a burden on me. Like I felt heavy. I felt like I did the wrong thing, and I couldn’t take it back.”

“I called back the doctors who gave me the abortion pill and they were like, no, no. Like the progesterone is gone,” Ashley said. “I’m freaking out. I was terrified. I thought, okay, I lost my baby. I did it. There’s nothing I can do about it,” Ashley stated in Pregnancy Help News (PHN).

Ashley then found the services of abortion pill reversal at a pregnancy center in Pennsylvania, and she said of the people there “Nobody’s telling you what you did was wrong and now you have to live with it. They’re 100%. Like I will help you from my own pockets. I will take money out of my own pocket and go help you,” Ashley said.

Ashley’s thankfulness for the work of those precious PRC staffers was clear, “Woman’s choice network. 100% gave me my baby,” said Ashley. “They saved not only my life, but my daughter’s life.”

Godsey has stated that with our without Roe v. Wade, Heartbeat International’s “work has always been about her – that mom who needs alternatives to abortion to make a life-saving decision. ”