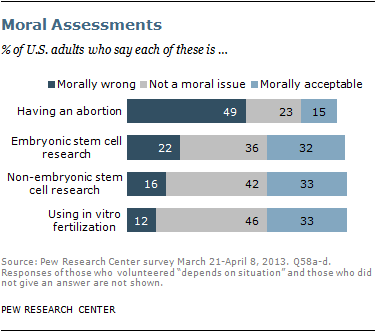 When it comes to issues involving human embryos, most Americans think that having an abortion is a moral issue, according to a new survey analysis by the Pew Research Center. By contrast, the public does not view stem cell research or in vitro fertilization as much of a moral issue as they do abortion. 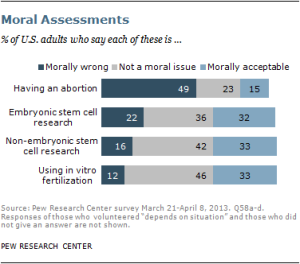 Asked whether abortion, embryonic stem cell research, non-embryonic stem cell research and using in vitro fertilization is morally acceptable, morally wrong or not a moral issue, Americans were split on most of the issues. However, the majority of U.S. adults (49%) say they personally consider abortion to be morally wrong. Only about a quarter (23%) say they do not consider having an abortion to be a moral issue, and even fewer (15%) view abortion as morally acceptable.

Asked about the morality of medical research that uses embryonic stem cells, more than a third of U.S. adults (36%) say they do not consider such research to be a moral issue. Roughly four-in-ten (42%) say the same about stem cell research that does not involve human embryos.

Only 15% of the public thinks that having an abortion is morally acceptable. By comparison, about a third of U.S. adults say they personally view IVF or either form of stem cell research as a morally acceptable practice.

These are among the key findings of a recent nationwide survey by the Pew Research Center’s Religion & Public Life Project. The survey was conducted March 21-April 8, 2013, on cellphones and landlines, among a nationally representative sample of 4,006 adults. The margin of error for the survey is plus or minus 2.1 percentage points.

Among other key findings:

Opinions on the morality of abortion differ widely among religious groups. Fully three-quarters of white evangelical Protestants consider having an abortion morally wrong, as do about two-thirds of Hispanic Catholics (64%). A majority of black Protestants (58%) and about half of white Catholics (53%) say the same. Fewer white mainline Protestants (38%) and religiously unaffiliated adults (25%) hold this view. Relatively small percentages of people in all religious groups consider it morally acceptable to have an abortion. However, among the unaffiliated, roughly equal shares say having an abortion is morally acceptable (28%) and morally wrong (25%).

There are sizable differences in opinions about the moral acceptability of abortion by partisanship, political ideology and education, but few differences when it comes to gender and age. For example, about two-thirds of Republicans and independents who lean toward the Republican Party consider having an abortion morally wrong (64%), compared with 38% of Democrats and Democratic-leaning independents.

When asked about the moral acceptability of medical research using stem cells that do not derive from human embryos, the overwhelming majority of adults say that non-embryonic stem cell research is either morally acceptable (33%) or is not a moral issue (42%); only 16% say such research is morally wrong.

There are only modest differences in opinion among social and demographic groups – including religious groups – about the moral acceptability of IVF. Those with at least a college degree are more inclined to say that using IVF is morally acceptable. But there are no significant differences on this issue by political party, and only modest differences by ideology; more liberals and moderates than conservatives say IVF is not a moral issue.

The full report is available on the website of the Pew Research Center’s Religion & Public Life Project.