If one is worth protecting, then all are.

Abortions after 20 weeks are barbaric and gruesome, like something out of a horror movie. Here is a link to a medical drawing of dilation and extraction late-term abortion, and this is a link to a medical journal article, Induction of Fetal Demise Before Abortion (without illustrations), that describes the process of using a lethal injection – through the uterus and into the fetus – to cause death before induced labor and delivery of a dead baby.

The shouting rabble in the galleries of the legislature yesterday in Texas have no idea what they’re supporting, or else they are being disingenuous about it. If you don’t want to follow the links to the reality of late-term abortion, consider looking at these galleries of smiling pregnant women with their 22-week baby-bump bellies. Or better yet, here’s a picture of me, 22 weeks pregnant: 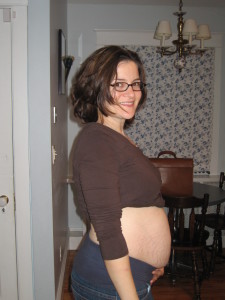 I’m actually 21 weeks, 2 days pregnant in this photo. I could feel him kicking, and you see I had to wear maternity jeans.
Don’t you love my stretch marks?

These procedures are so abhorrent that there are even people currently working in abortion clinics who (privately) blanch at late-term abortions while feeling the need to maintain a public façade of pro-abortion until nearly birth.

When I worked in a first-trimester abortion clinic, many years ago before becoming pro-life, it was commonplace for staff members to hold different views about just how far along is too far along to obtain an abortion. I remember there being a continuum of opinions – obviously everyone supported abortion in the first trimester or wouldn’t have worked there – but I cannot remember anyone loudly advocating for abortion beyond 20 weeks.

There were women who came in not knowing how far along they were in their pregnancies. Those whose pregnancies were determined to be beyond the clinic’s legal limit of 14 weeks LMP (weeks of pregnancy are measured from the first day of the woman’s last menstrual period, or LMP, as is standard in the medical community) were referred to other clinics who would perform late-term abortions. Later, we would chide the patient in the staff lounge – “What took her so long? Now she has to go there.” Because we all knew that not one of us would work at a late-term clinic. We were somehow morally superior to those clinics.

In the early ’90s, the clinic I worked for sought to increase revenue by performing abortions later into pregnancy. They wanted to extend the center’s limit from 14 weeks to 16 weeks LMP. There was a staff meeting called to explore this. Although we grunts had no real say in the matter, the clinic management and owners had a vested interest in our reactions to this change. Because these were human beings whose lives were being ended by other human beings who might not continue to toe the line were the line to be blurred such as they were trying to do.

The lengthy discussion in that meeting was emotional – some of the workers were mothers, and a few objected to doing later abortions. Why would 2 weeks matter? It mattered because 2 short weeks is a very long time in the developmental period of a pre-born human. And everyone at that meeting knew it.

Here’s what the difference of 2 weeks means: It means growth. It means weight. It means foot length. Foot length? Yes. For anyone familiar with what goes on with human remains after an abortion, foot length is quite important. Measuring the foot of the deceased is the most accurate way to determine fetal age post-mortem. Tiny feet were measured beside me more times than I can count. Measuring tiny feet was how abortion facilities matched pre-abortion estimates of fetal age with the reality after death. The age determined by the measurement of the tiny feet was the age put on the forms that I completed for the state Department of Health abortion statistics.

Even the tools of the trade were tailored to this macabre practice. This is a photo of a “Pregnancy Wheel” from 1991. Before internet due date calculators, these little plastic things were used (and still are in obstetricians’ offices) to determine due date, or EDC (Expected Date of Confinement…isn’t that quaint?). 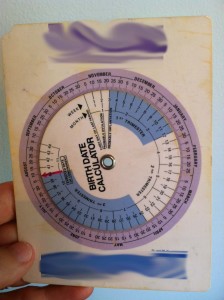 Even more telling is the back of the Pregnancy Wheel: 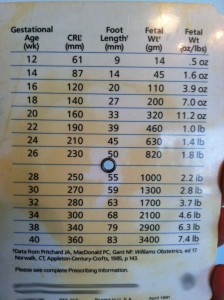 I have blurred the pharmaceutical company’s name.

Here’s a chart of length of pregnancy in weeks and how long the baby is (CRL is Crown-Rump Length, a measurement that is just what it sounds like: from the top of the head to the curve of the buttocks); weight in grams, pounds, and ounces; and there it is: Foot Length.

Ultimately, the center where I used to work did win approval to legally extend the limit to 16 weeks. Two people quit. Another two (including me) requested not to work on “late days.” Because 2 weeks makes a difference. Because voicing support for “a woman’s right to choose” is amorphous, intangible, and sounds laudable; and measuring bloody severed feet is real, immediate, and disgusting.

The combination of eyewitness testimony of former abortion workers and technological advances in ultrasound imaging and saving the lives of younger and younger premature babies is opening the eyes of many who have been blind to the horror of abortion for too long. It is becoming increasingly more difficult for abortion advocates to deny the humanity of the living, growing, genetically unique, irreplaceable, and un-repeatable pre-born human being. I pray more hearts and minds are changed as a result of the recent intense scrutiny over proposed legislation banning abortions after 20 weeks. The more they see, the more they will come to believe.

So the next time an abortion advocate remains steadfast in supporting abortion for any reason and at any point in pregnancy, remember how tenaciously he or she is struggling to maintain a grasp on that very slippery slope. Because once you decide that one life – at 22 weeks, at 20 weeks, at 32 weeks, at 18 weeks, at 12 weeks – is worth protecting, you just might realize that they are all worthy of protection.