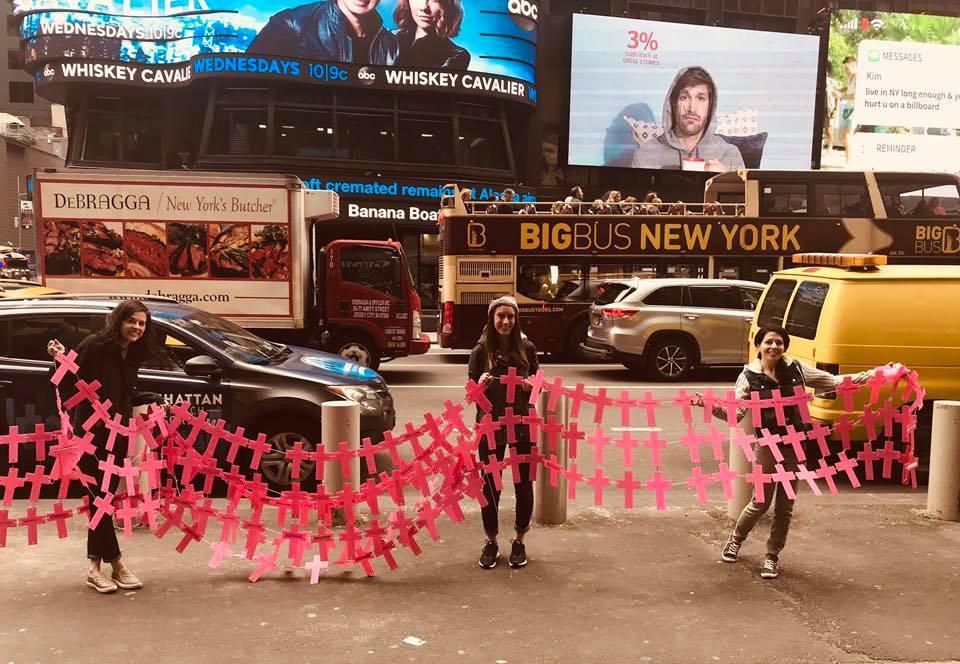 Students for Life of America (SFLA) made a big splash in the Big Apple this week with their National Gala on April 10 and a massive 50-foot-tall pro-life video billboard in Times Square for at least five days. Members of the organization also hit the streets of New York City with 910 pink crosses to represent the 910 children killed every day by Planned Parenthood.

“When I asked our supporters if they wanted to send a pro-life message in Times Square, the answer was a resounding YES,” said SFLA President Kristan Hawkins in a press release. “We had to fight to have our message heard as twice companies pulled the plug on our custom-made ad after intensive negotiations. Be we don’t give up on college campuses, even when facing threats of violence, and we don’t give up on sending a message to the vast majority of New Yorkers who reject infanticide and are horrified by the abortion extremism recently legalized in New York.”

In January, New York Governor Andrew Cuomo, who has said pro-lifers are not welcome in New York, signed into law a bill that allows third-trimester abortions and removes protections for babies born alive after an abortion. In March, a new Marist poll revealed that 75 percent of New Yorkers are actually against late-term abortion.

The SFLA Times Square video billboard shares another statistic about abortion. “Only 7% of millennials support the abortion extremism made legal in New York State,” the billboard states. It also features video clips of women holding signs that declare, “I reject abortion extremism” and “I am the pro-life generation.”

On April 11, SFLA members from all around the country headed to Times Squares with 910 crosses to represent every baby that Planned Parenthood kills each day through abortion. The display will continue on, traveling to over 130 campuses around the country.

“Over 900 crosses were held to represent lives lost at Planned Parenthood in just ONE day. And the best news? This wasn’t just a protest… We had 90 conversations,” said Michele Hendrickson, Eastern Regional Director at SFLA. “We changed 27 minds (Many were surprisingly already pro-life, so no change needed!) We found a lead to start a brand new SFL group in NYC!!”

The SFLA #PlannedParenthoodTruth tour will feature the crosses and travel around the country in the spring to educate people about New York’s Reproductive Health Act and the poor standard of care women will receive as well as the horrors of late-term abortion and infanticide for abortion survivors.

“The Pro-life Generation will not forget the least of these among us, mothers and their pre-born infants, who deserve our help and support,” said Hawkins.