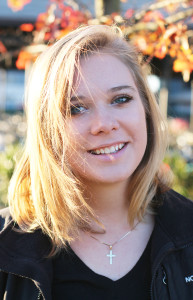 Claire Chretien is not your average 20-year-old student at the University of Alabama.   Claire has been an outspoken advocate not only for the pre-born, but for the rights of students to speak about abortion in one of the places it is needed most: on campus.   As president of the campus’s pro-life club, Bama Students for Life, she worked with Alliance Defending Freedom when the university threatened the First Amendment rights of the pro-life students on campus.

During my freshman year, I switched from supporting abortion to being pro-life when I realized that science shows that the youngest members of the human family are just as human as we are.

I went to my first March for Life in 2012.  When I was there, I felt an intense calling to dedicate my life to ending abortion.  Monica Migliorino Miller described this feeling best when she wrote in Abandoned: The Untold Story of the Abortion Wars:

As awareness of injustice grips you, you cannot free yourself and it is suffering…I felt the burden of being aware that a whole segment of the human family was denied their right to live.

I realized how unfair it is to kill someone as defenseless as a baby in the womb.  Since then I have been consumed by the feeling that I need to do everything I can to help the weak, defenseless human beings whose lives are threatened by the violence of abortion. 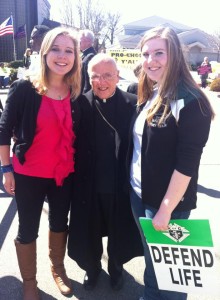 Claire with Bishop Emeritus Foley, the former Bishop of the Catholic Diocese of Birmingham, and Elena, the former president of the Pope John Paul II pro-life club in Huntsville, AL. The three of us spoke at a pro-life rally outside of the Alabama Women’s Center for Reproductive Alternatives, which is just closed but is attempting to re-open near a middle school.

I began sidewalk counseling during my freshman year at Alabama. During my sophomore year I was an officer in Bama Students for Life. That year, we worked with Tuscaloosa’s pregnancy care center, and we spoke before the Tuscaloosa city council about the health department’s deficiency reports on the local abortion facility.  We also organized and hosted the Pro-life Training Academy.

During Life Week — our big week of events during the spring — we hosted the Genocide Awareness Project, a fetal development display, and Cemetery of the Innocents.

During my junior year, I wrote a biweekly column in the University of Alabama’s newspaper and focused on abortion and religious liberty issues.  I also write for Live Action News.

Everything I do to defend life would be impossible to do without the help of so many other people.  Everything BSFL did under my presidency was a group effort. 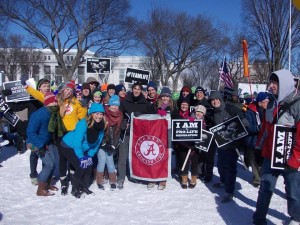 The Bama Students for Life group at the March for Life in 2014.

During the fall 2013 Tuscaloosa 40 Days for Life campaign, the local abortion facility began a fundraising campaign called “Adopt an Anti-[abortion advocate],” during which they asked abortion supporters for money every time a pro-lifer was at the prayer vigil.  The abortion center then claimed that our prayerful presence would be used to fund abortions.

The abortion escorts were particularly nasty to us during this campaign, but because of it our 40 Days for Life vigil attracted more attention than it otherwise would have.  We countered their campaign by launching our own to give funds to young mothers who choose life. 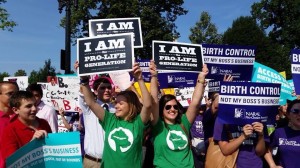 Claire with a group of students outside of the Supreme Court in Washington, D.C. when the Hobby Lobby religious freedom case was decided.

My Catholic faith gives me the strength to keep going when I feel discouraged or burned out.  During tough times I also hold onto the knowledge that pro-life work is absolutely necessary.  Even if I am not seeing immediate results, I know that I must do everything in my power to stop babies from being killed by abortion.

During dark times in human history, there have always been people who have risked everything to fight the evils of their age.  I hope I can be as courageous as the anti-slavery abolitionists were and as unwavering as the early Christians were.

Be strategic, and be bold.  For example, bringing the Center for Bio-Ethical Reform’s Genocide Awareness Project to campus was extremely effective, because it allowed us to show thousands of students what abortion is, and to engage in countless dialogues and debates. 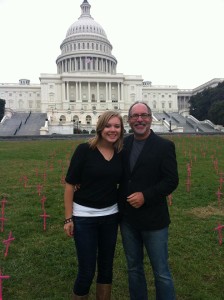 Claire with Rev Mahoney, a prominent pro-life activist, in front of the Cemetery of the Innocents display on the Capitol Lawn in Washington, D.C.

Familiarize yourself with local (and national) pro-life organizations.  If you continue showing up at pro-life events, whoever is in charge will eventually start teaching you the ropes.

Don’t be afraid of abortion supporters, who will always have some complaint about whatever you’re doing to help pre-born babies.

Do what you’re good at!  My friend Anne is an excellent knitter, so she makes blankets for fetal models and distributes them outside abortion facilities.  Her tiny little blankets help save lives all the time.

Pope St. John Paul II because of his steadfast defense of human life throughout his papacy.  He wrote eloquently about human dignity, spoke so powerfully about mercy, and just lived such an inspiring, holy life!

Pope Emeritus Benedict XVI is absolutely brilliant.  He, like Pope St. John Paul II, has written beautifully about human dignity.  He also has written and spoken compellingly on moral issues, especially abortion, and the calling each person has to defend life.

“The acceptance of abortion in the popular mind … is a telling sign of an extremely dangerous crisis of the moral sense, which is becoming more and more incapable of distinguishing between good and evil … 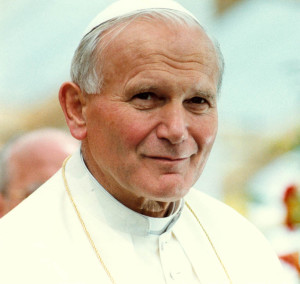 Given such a grave situation, we need now more than ever to have the courage to look the truth in the eye and to call things by their proper name …  In this regard the reproach of the Prophet is extremely straightforward: ‘Woe to those who call evil good and good evil, who put darkness for light and light for darkness’ (Is 5:20).  … no word has the power to change the reality of things: procured abortion is the deliberate and direct killing, by whatever means it is carried out, of a human being…”

(Editor’s note: Claire had so many wonderful Ideas that we ran out of space for them. These ones are our favorites!)