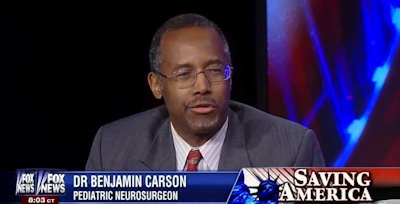 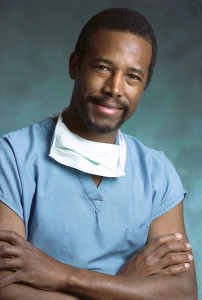 Last February, the prestigious neurosurgeon Dr. Ben Carson captured millions of Americans’ attention with a stirring National Prayer Breakfast speech. Once known for a career full of medical breakthroughs and philanthropic work, he entered the political arena by speaking thoughtfully and intuitively on America’s economic and cultural challenges – with an uncomfortable President Obama sitting just a few feet away.

Dr. Carson’s been opining about politics ever since, including abortion. Most recently, he said the following during a Friday speech at the annual Values Voter Summit:

But when we’re talking about things that are important, life is important. And that includes the life of the unborn. You know, there are those of us in this society who’ve told women that there’s a war on them because that cute little baby inside of them, they may want to get rid of it, and there are people who are keeping you from doing that. And when women say, “no, no, they’re not doing that to me! No!” And they get all riled up and think that somebody’s depriving them.

Let me tell you something: there’s no war on women. You think about it, when a woman is pregnant, what happens? People get up, they give her their seat, they get out of the way, they say, “you can go first.” There is great respect and love for pregnant women. There isn’t a war on them. The war is on their babies! That’s where the war is. Babies that cannot defend themselves.

Over the past few decades, we have destroyed fifty-five million of them. And we have the nerve to call other societies of the past “heathen.” Think about that. And what we need to do is re-educate the women to understand that they are the defenders of these babies, not to destroy these babies.

An item at Raw Story runs with the headline, “Fox News’ Ben Carson: ‘Re-educate the women’ because ‘they get all riled up’ over abortion.” As hundreds of their commenters picked up on, emphasizing that phrasing is apparently meant to evoke the old saw about pro-lifers infantilizing women. Misogynist! Patriarch! How dare you suggest that any female possess less than perfect knowledge and understanding of their choices?!

Nonsense. First, Carson’s referring to women who seek abortions, not womankind as a whole, and as we’ve noted repeatedly, the numbers show plenty of room between those two categories. If you want to know why productive dialogue is so rare, liberals’ obsession with collectivizing any statements about people within groups is a good place to start. It’s impossible to get anywhere when one of the parties is constantly looking for pretexts to accuse the other of bigotry.

In fact, that proves the good doctor’s point – constantly telling their audiences that pro-lifers think they’re stupid because they’re women is a transparent attempt to get them all “riled up,” to keep them too busy feeling angry and victimized to think about what their supposed oppressors are actually saying, or what they’re really defending.

Second, this idea that nobody considering abortion takes the choice lightly has never been more than a cheap attempt to simultaneously stoke supporters’ egos and cast opponents as sexists – even if true, it no more justifies abortion than thinking really, really hard about it beforehand would justify rape. But the truth is that there’s no reason to assume that the average abortion-seeker truly knows the gravity of her “choice.” For one thing, we know that the abortion industry does all it can to deceive them about what’s growing inside them.

For another, assuming that the abortion-seeker doesn’t really know what she’s doing is actually the more charitable explanation, considering that the alternative is that she’s knowingly committing murder. Knowing you created a new living human being only to kill him or her, knowing he or she may have been conscious or sensitive to pain, being aware of the possibility that you snuffed out a distinct soul…these don’t exactly make the defense more sympathetic.

There isn’t any one reason mothers have their babies killed – some have been systematically lied to about what they’re carrying, some struggle with the decision but ultimately succumb to temptation, and some are simply callous narcissists. Education (or rather, propaganda deprogramming) will be a central part of the answer. And to do it, there are few people better to have on your side than a lifelong professional life-saver.