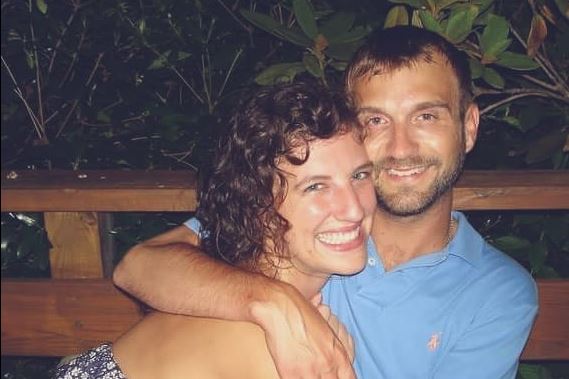 For nine years, Hope Dezember was by her husband Steve’s side as he battled ALS (Amyotrophic Lateral Sclerosis). On April 2, 2020, Steve passed away at home at age 37. He lived and he fought until the end.

“I’ve tried to find words to say this but right now all I can say is I’m heartbroken, but Steve got to pass away at home after seeing his family comfortable in his own surroundings,” Hope wrote on their Facebook page, Hope for Steve. “He will forever be my main motivation in life and my favorite person. I will love you forever boopy and I’ll never stop telling your story.”

Hope and Steve first met when she was his drug and alcohol therapist for eight weeks. Four years later, they remet, and though she had forgotten his name, she hadn’t forgotten him. “He has an unforgettable energy,” she said. “Everyone who knew him will agree with me. […] He will forever be the most alive human I know… even in his final days, he couldn’t communicate aside from the occasional blinks and tears but looking back he was telling me. He knew it was happening.”

When they first reconnected, Hope watched as Steve raised his glass and struggled not to spill it. A few months later he was officially diagnosed with ALS, and though he told her she was free to leave him, they were engaged two days later. Doctors said he may have two to five years to live.

“He said, ‘I know this is going to be hard. You know what this entails. You don’t have to stay,'” Hope told CNN in 2016. She stayed and two months later they were married.

READ: Mother with ALS who bravely refused to abort her daughter has died

Though doctors offered no hope, the couple made a choice to live their lives to the fullest and to fight ALS with all they had. They traveled together, even after ALS took Steve’s ability to walk. Life was always worth living, and they adjusted life to fit Steve’s needs as they changed. Taking care of him gave Hope purpose.

Hope learned to feed Steve and learned how to help him when he choked. Then she learned to feed him with a feeding tube. Then she learned how to clean his trach after he developed pneumonia. With each punch that life threw, she stood up stronger. “I have had to have a lot more faith in the dark moments,” she told CNN. “Just being like, ‘I don’t know how we’re going to get through this.’ Even times when Steve gets really sick, I get really discouraged, like why is he so sick right now? I have to have faith that it was just part of God’s plan.”

Hope & Steve enjoying some live outdoor music at Matilda's under the pines :)))

As the years went by and Steve’s health worsened, hope remained. The couple made art together using his wheelchair. They raised awareness for ALS and enjoyed every moment life gave them. “[W]e really want to show people that you can still do awesome things, even though life presents a hard situation,” said Hope at the time. Nothing was capable of breaking their bond, their love, or their fighting spirits. Thankfully, they had a medical team who was right beside them in that fight.

“I talk to anyone on our team about what they think is happening and know what they aren’t saying,” wrote Hope during what would be Steve’s final days. “I know what everyone’s not saying. And I thank them for not saying it. For understanding our want to never give up. […] I thank Steve everyday for helping me learn to feel the truths of our life. He’s never hidden his feelings and in moments where I would shut down he would always ask me, ‘what are you feeling?’ He brought me back to what life is. Full of every emotion.”

I used to allow this app to influence my way of living. .I would share some real struggles I was experiencing and…

Steve knew he was dying and he wanted to tell anyone who would listen just how precious life is and that it should be cherished. “If there is one thing I want everyone to learn from me it’s that when you are struggling to be happy, look at the simple things that God has given you such the ability to type, breathe, talk, swallow, kiss your wife, significant other, and really think about the simple things you have and be happy about them for they can be taken away in an instant,” he said in the film Stay Human. “Live your life to the fullest and never take a day for granted. Just be grateful for the simple things and enjoy the gift of life.”

Through all of her heartache and pain — and the fear that she wasn’t handling challenges as well as other people were — Hope was there for each moment alongside Steve. Despite every setback, no matter the pain they felt, they lived.

“I’m so thankful that life arranged itself for us to meet again and I’m thankful I trusted my feelings and walked eyes wide open straight into a fire with him, and what a beautiful transformative fire it’s been my love,” she said after Steve’s death. “I’ll carry the flame on for you.”