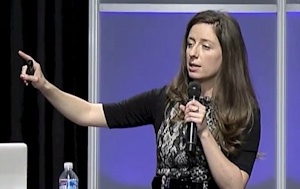 Stephanie Gray is the executive director and co-founder of the Canadian Centre of Bio-Ethical Reform, an educational pro-life organization. Since 1999, Stephanie has traveled the world, educating people about the issue of abortion. She’s debated abortion advocates like the Canadian late-term abortionist Dr. Fraser Fellows, Ron Fitzsimmons of the National Coalition of Abortion Providers, and Elizabeth Cavendish of NARAL.

In a talk before hundreds of young people at the 2014 Students for Life Conference, Stephanie gave a talk titled “Challenging the ‘I am personally pro-life but.’” During this talk, Gray gave a justification for the use of abortion victim photography. Stephanie makes it clear that pro-lifers must make the case that the pre-born are human and the action of abortion is lethal. One way we can do that is through powerful images.

Gray references the state of Montana’s graphic billboards and commercials that were used to expose the consequences of using crystal meth. According to her statistics, those images helped the state of Montana to go from fifth in the nation for crystal meth use in 2005 to 39th in the nation currently. She also referenced how the images shown during the tsunami in Japan influenced millions to donate to charities. Not to mention the shocking images of people jumping from the World Trade Center towers and the burning buildings, which caused blood banks to have a shortage of bags because of the massive amount of donors coming in on Sept 12, 2001.

Stephanie makes a valid point that the babies are the real victims and that their stories have a right to be told. She asks the audience if we would ever tell a victim of the Rwandan genocide to share her story behind a black screen because her scarred face from the machete is too disturbing to behold. She questions if we would tell a victim of a drunk driving accident to tell his story story on radio to hide the upsetting image of his burned skin. Gray argues that our society would never do that, because those people are victims, and we must be willing to see their faces and hear their stories.

Listening to Stephanie’s talk reminds me of the time I watched 12 Years a Slave. The beating scenes were so graphic and bloody that I looked away more than once. Nevertheless, I’m glad I watched that film. It exposed the horrors of slavery like few films have. The video Stephanie shows has graphic images, but they are worth seeing. Hopefully the feelings they evoke will lead us to greater action on behalf of protecting the pre-born.