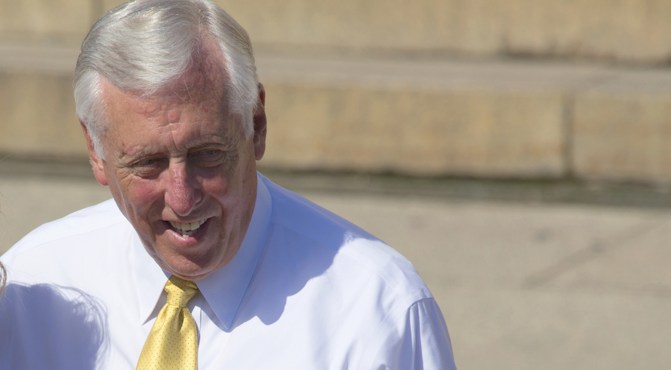 Just in case you were still under the impression that “pro-choice” has anything to do with letting people make choices (despite all evidence to the contrary), House Minority Whip Steny Hoyer is here to clear things up.

CNS News recently grilled the leading congressional Democrat on the District of Columbia’s Reproductive Health Non-Discrimination Act, which forbids DC employers from “discriminat[ing] against an individual with respect to compensation, terms, conditions, or privileges of employment” on the basis of their “reproductive health decision making, including a decision to use or access a particular drug, device or medical service, because of or on the basis of an employer’s personal beliefs about such services.”

Translation: if you’re an organization in the nation’s capital with any pro-life sensibilities—even if your whole purpose for existing is stopping abortion—you can’t expect your employees to actually agree with your mission statement. If someone working for you spends their every waking moment off the clock working against your cause, apparently you can do nothing but smile and nod at him for eight hours a day. (Something tells me this isn’t a courtesy Planned Parenthood would extend to pro-lifers.)

Noticing that this is, well, insane, and mindful that the Constitution gives Congress jurisdiction over DC affairs, CNS News asked Hoyer, “Can the government force religious organizations to hire people who advocate for abortion?”

First he claimed he couldn’t comment on a law he wasn’t familiar with, but at least gave lip service to liberty:

Well, look, I don’t know specifically what you’re referring to. We’ve been through this with the ACA [Affordable Care Act]. I believe that clearly the ability of people to speak freely is a constitutional guarantee, but I also think freedom of religion is a constitutional guarantee and they need to be balanced, and that’s always a tough thing to do. I’ll leave it at that.

But, lest any of the Abortion Party’s leaders accidentally leave people thinking they might be reasonable, his office soon followed up with a statement that Mr. Hoyer would be letting this blatantly unconstitutional infringement on conscience rights slide after all, thank you very much:

Mr. Hoyer supports D.C. autonomy and home rule, and consistent with that support, he defers to the City Council and Mayor in enacting legislation.

Ah, I see. So in his view, Uncle Sam shouldn’t meddle in local decision-making. Got it. But what happens when the locality in question isn’t run by pro-aborts and doesn’t have the third-highest abortion rate in the country? Then you get the Freedom of Choice Act of 1993, which would have expressly forbidden states from banning abortion, legislatively codifying Roe v. Wade. And look who was one of the cosponsors: Steny Hoyer!

Hoyer’s been in office for almost twenty years, and Planned Parenthood and NARAL have rated him 100% in nearly all of them. He cheers Roe v. Wade for “affirm[ing] every woman’s basic right to individual privacy and reproductive health choices.”

Presumably he would explain all this away by arguing abortion is special because it’s a constitutional right. Even setting aside the fact that it absolutely isn’t, that still begs the question: and pro-life employers’ rights to religion, conscience, and association aren’t?

Legally, Hoyer’s got home rule exactly backwards: he believes in the autonomy of a locality the Constitution expressly says is not autonomous, but stands unapologetically for Congress and the Supreme Court taking such choices away from the governments which do have such lawful discretion. It’s almost as if “choice” is only a pretext for another value he’s really concerned about…