Speaking out for the most vulnerable among us.

According to the Associated Press, Justice Minister Alberto Ruiz-Gallardón of Spain “has said he will ask Parliament to change the existing law” on abortion in his nation. Two short years ago, Spain – then under socialist rule – liberalized its abortion policies. Gallardón intends to ask Parliament to reverse this expansion of abortion in Spain and, instead, extend the right to life to more unborn children. 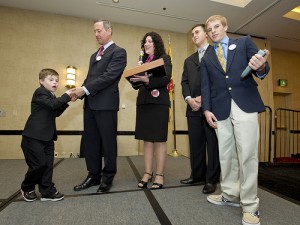 Gallardón believes all of these people have an equal right to life. Photo credit: Jay Baker, at the Maryland Developmental Disabilities Coalition

Perhaps the most controversial – and one of the biggest – changes Gallardón is proposing is a possible ban on abortions that are done solely based on a defect or disability in the child. An Australian news agency reports, “The proposed laws would make the procedure illegal in cases where the foetus is deformed.” Bloomberg Businessweek has a different take: the proposed laws would “make it harder for women to abort fetuses with physical deformities.” It remains to be seen if Gallardón will ask for a ban on these abortions or for restrictions on them. Either way, he has taken a courageous stand on the side of those who suffer from disabilities.

In an interview with La Razón, Gallardón stated:

I do not understand that it [the current law] prevents a fetus to live by allowing abortion, for the simple fact that he suffers from a disability or deformity.

Gallardón highlighted the inconsistencies of the United Nations when he referred to their apparent support for people with disabilities: he referred “to the texts of the UN and Article 10 of the Convention on Disability Rights, which reaffirms the need ‘to adopt all necessary measures to guarantee their rights to people with disabilities.'” The president of Spain’s association of clinics that specialize in abortion and one of the men who wrote the liberalized 2010 abortion law, Barambio Santiago, disagreed with Gallardón:

[T]he UN in all international conferences, all the health agencies of the UN, the World Health Organization, the Council of Europe, say not to restrict abortion.

Sadly, The Australian reports that 81 percent of Spaniards oppose banning abortions performed on babies with disabilities. It is unknown whether this poll is accurate, because it was “published overnight in left-wing newspaper El Pais.”

However, The Australian also reports that many who would be expected to support the inherent right to life of all human beings also reject Gallardón’s proposal.

While it is excellent news that Spain’s leader – Justice Minister Alberto Ruiz-Gallardón – is taking a courageous stand on behalf of unborn babies with disabilities, it is a sad note on the state of the world that many of his people disagree with him. We can only hope and pray that the Spanish Parliament agrees with Gallardón and recognizes the right to life of those who are arguably the very most helpless and targeted among us. Many times, doctors tell parents that a baby has a defect, and yet, when the baby is born, there is nothing wrong at all. How many babies like this have been aborted? The bottom line, however, is that with or without a defect, every baby is equally precious and equally deserving of the right to live.