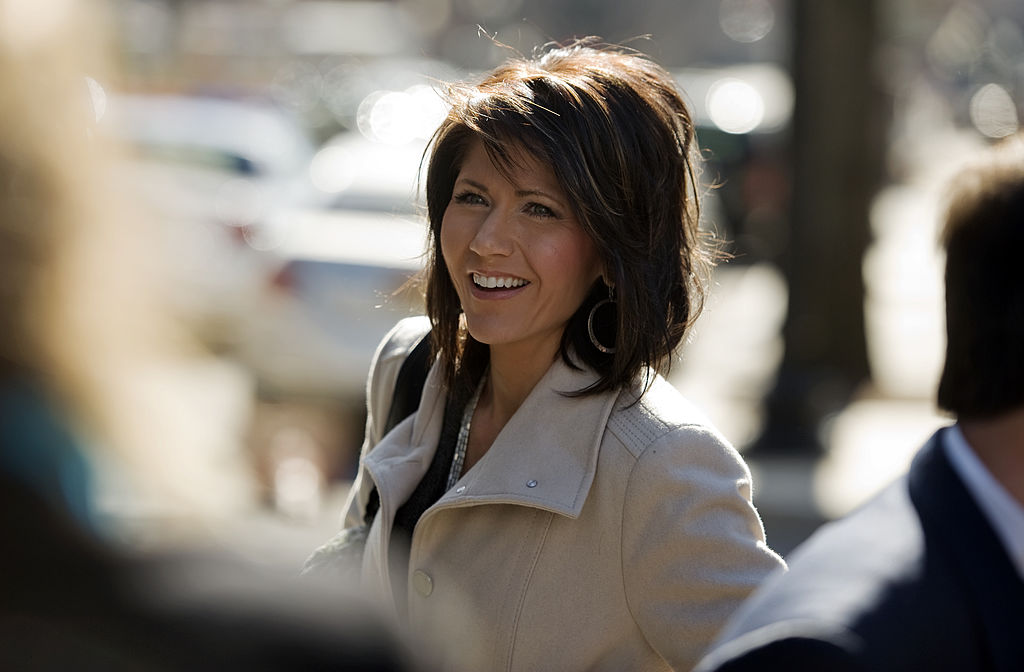 In her annual State of the State address this week, South Dakota Governor Kristi Noem announced that she is proposing a Down syndrome abortion ban to the state legislature. Joined by the families of Cody Fite and Valentina Duffy, who both have Down syndrome, Noem argued that children with Down syndrome have a right to live, just as anyone else does.

Before the address, she appeared on Fox & Friends with Rachel Campos-Duffy, former Wisconsin GOP Rep. Sean Duffy, and their daughter Valentina to discuss the bill. “I think little Valentina, right here — her little face shows what a blessing that she is to this family; they are going to talk to the people of South Dakota and legislators how important that bill is,” Noem said.

Children with Down Syndrome, like little Valentina, bring such joy into our lives. Like @RCamposDuffy said: "she has a right to live, just like everybody else."

Today, I will propose to the SD legislature that we ban abortions based on a Down Syndrome diagnosis. @SeanDuffyWI pic.twitter.com/Qbbnt3WGxz

The decision to introduce a bill to ban abortions on children with Down syndrome was applauded by Campos-Duffy.

“I don’t think it is a coincidence that she is a mom and this is coming out of a mom governor,” Campos-Duffy said, adding, “I would just say to any woman who has a diagnosis, who gets that call from the doctor just like I did, Valentina has given me as much joy and pride as any of my other little babies, and she is an American and she has the right to live just like everybody else.”

During her speech, Noem asked the Fite and Duffy families to stand and be recognized, saying that God blessed these children with “gorgeous smiles” and “distinct personalities,” but pointed out that numerous countries around the world are essentially exterminating people with Down syndrome. Thanks to sky-high abortion rates, countries like Iceland and Denmark are steadily aborting the overwhelming majority of preborn babies diagnosed with the condition. This, Noem argued, cannot be allowed to take place in the United States.

As South Dakotans — frankly, as human beings — we should all be appalled by this. We are better than that.

The Declaration of Independence summarizes what we all know in our hearts to be true. God created each of us and endowed all of us with the right to life. This is true for everyone, including those with an extra chromosome.

I look forward to the day when the Supreme Court recognizes that all preborn children inherently possess this right to life, too. Until that time comes, I am asking the South Dakota legislature to pass a law that bans the abortion of a preborn child, just because that child is diagnosed with Down syndrome.

Let’s make South Dakota a symbol of hope, justice, and love for children like Cody and Valentina. With the help of several pro-life groups across the state, my team will present legislation for your consideration and swift passage.

In another tweet the morning after the address, Noem echoed those thoughts, arguing that everyone’s life deserves to be protected. “God created each of us and endowed all of us with the right to life. This is true for everyone, including those with an extra chromosome,” she wrote. “We must stand for the right to life of every preborn child, including those with Down syndrome.”

The Down syndrome birth rate has fallen in Europe by over 50% as prenatal testing, a pro-life tool hijacked by the abortion industry to target and destroy some children before birth, becomes more and more commonplace. While abortion rates of preborn children with Down syndrome are not as high in the United States as they are in Europe, they are still substantial — and many parents report being pressured or receiving outdated, inaccurate information in an effort to convince them to abort.

One New York mom said doctors scheduled an abortion without her permission, then pressured her to abort every single week until she gave birth. Other parents report similarly horrifying experiences: doctors referred to their babies as “it” or as burdens, said they should place their babies for adoption, threatened that the fathers would abandon them, and even described the situation as a “crap sandwich.” One survey found that 13% of doctors admitted to intentionally emphasizing the negative aspects of Down syndrome so the parents would abort.

Down syndrome abortion bans are necessary. People with disabilities have just as much of a right to life as anyone else, and it is nothing short of eugenics to target someone for death because of their disability.