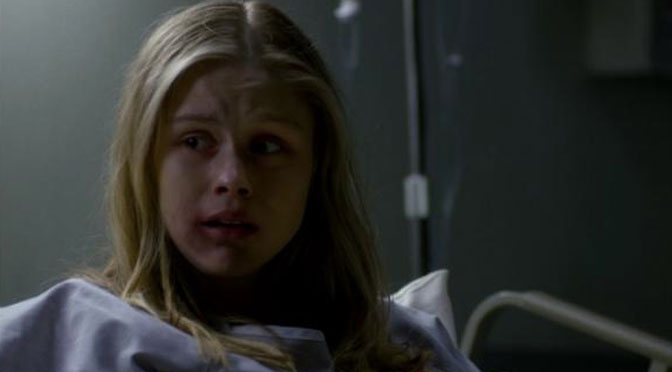 Slate just loves Jessica Jones, the new Netflix show. Slate also loves to promote abortion and has found a way to combine both.

A piece from Nov. 24 by Christina Cauterucci claims in its headline that “Anyone Who Opposes Abortion for Rape Survivors Should Watch This Jessica Jones Scene.” The piece’s byline and content also specifically address those in the GOP who oppose rape exceptions.

The piece is chock full of your typical pro-abortion misconceptions when it comes to abortion.

A character from episode six is Hope Schlottman, who is pregnant with the baby of a rather terrifying serial rapist. Hope is in jail and has paid another inmate to beat her up in hopes of inducing a miscarriage.

Titular character Jessica Jones suggests that Hope wait for a clinical abortion. Hope answers, “Every second it’s there, I get raped again and again.”

For those of us who have not found ourselves in such a situation, we may not be able to know exactly what Hope is going through, but there are those who have gone through the same thing, and who have spoken up. Many of them do not feel the way Hope does. Rather, it’s those around them – those pressuring them to abort – who have taken such a disdainful view about the pregnancy.

That Hope doesn’t want to wait also rebuts one of Cauterucci’s own points. The caption following the screenshot from the episode reads, “With no other options, Hope Schlottman took her abortion into her own hands.” Except it doesn’t sound like Hope had “no other options.” Since Hope was not set on choosing life, she could have at least taken Jessica Jones’ suggestion. If Slate is trying to use this character’s situation to argue about the fate of women should abortion be outlawed, they fail miserably here.

As an abortion-supporting site, it’s not surprising that Slate takes issue with pro-life candidates. But Cauterucci makes a very bold, and also false, claim:

This year’s slate of Republican presidential candidates is crowded with men who wouldn’t give Schlottman’s case a second thought.

Current presidential candidates may oppose abortion in cases of rape or incest. But by opposing one so-called solution to a horrific crime and act of violence in no way means that they “wouldn’t give [a] case a second thought.”

Marco Rubio, for instance, a candidate mentioned by name, talked with Meet the Press’s Chuck Todd about the rape exceptions. Part of his response mentioned:

… I mean, a rape is an act of violence. It’s a horrifying thing that happens. And fortunately, the number of abortions in this country that are due to rape are very small, less than 1% of the cases in the world. But they happen. And they’re horrifying. And they’re tragic. And I recognize that.

This is just one instance where Rubio has spoken about his stance. Does that sound like somebody who “wouldn’t give [a rape victim’s] case a second thought?”

The rest of the piece contains points which could apply exactly to the regret a woman who aborts her baby may feel:

Schlottman’s pleas testify to the injustice of abortion politics that don’t include exceptions for rape, incest, and women’s safety. Politicians who would force a woman to carry to term a fetus created by assault are inflicting yet another violation on a survivor who’s already had her desires trampled… But for actual survivors of sexual violence, memories of a perpetrator without Killgrave’s evil superpowers can be equally painful as Schlottman’s. A resulting pregnancy can be an equally distressing reminder of that trauma—to say nothing of the sadism of forcing a rape victim to endure the excruciating, sometimes days-long ordeal of labor and delivery.

Oftentimes the abortion is a way of “inflicting yet another violation on a survivor who’s already had her desires trampled,” especially if the woman is pressured into the abortion.

The woman now has to recover from the abortion as well as from the rape. And let’s not forget that an abortion is always a violation against the preborn child’s life, regardless of how conception took place.

Cauterucci points to the “sometimes days-long ordeal of labor and delivery.” But that’s how babies are born, regardless of whether or not a woman was raped. (A midwife mentions that while it’s very difficult to predict how long labor takes, first births rarely take over 18 hours.)The amount of time your delivery takes doesn’t depend on how your baby was conceived.

More important is the fact that the baby will be born and labor will come to an end. However a baby was conceived, giving birth is a courageous act. Many rape victims have shared that it helped empower them from their rape.

Cauterucci closes by stating that “politicians should be concerned with punishing rapists, not their victims.” Yes, exactly! Aborting the baby may actually serve to help a rapist, as it covers up his crime. An abortion, even if it is what the rape victim wants, or thinks she wants, punishes a completely innocent party. The preborn child is the farthest thing from the rapist – he or she is a victim.

Essentially, Cauterucci’s piece does very little for rape victims. It just shames those who happen to disagree with her view.