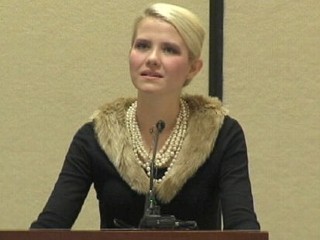 Well-intentioned and well-adjusted people do not stoop this low to demonize people and ideas they disagree with. 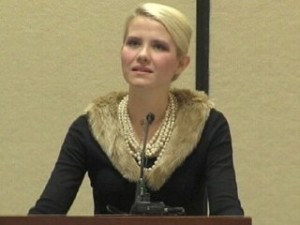 In 2002, the kidnapping of 14-year-old Elizabeth Smart captured the nation’s attention. Rescued nine months later, Smart had been held prisoner and raped by Brian David Mitchell, who is currently serving a richly-deserved life sentence. Today, Smart is a 25-year-old author, advocate for child-protection laws, and missing persons commentator for ABC News.

Last Wednesday, Smart spoke at a Johns Hopkins University forum on human trafficking. She discussed her mindset while in captivity, the following excerpt of which has been picked up by numerous liberal commentators:

I remember in school one time, I had a teacher who was talking about, well, about abstinence, and she said, “imagine that you’re a stick of gum, and when you engage in sex, that’s like getting chewed, and if you do that lots of times, you’re gonna become an old piece of gum! And who’s going to want you after that?” Well, that’s terrible, but nobody should ever say that, but for me, I felt, oh my gosh, I’m that chewed-up piece of gum! Nobody re-chews a piece of gum. You throw it away. And that’s how easy it is to feel you no longer have worth, you no longer have value. Why would it even be worth screaming out, why would it even make a difference if you are rescued, your life still has no value.

Slate, the Huffington Post, Gawker, ThinkProgress, and MSNBC all have pieces up with headlines depicting Smart as saying abstinence education itself made her feel worthless and demoralized her away from trying to escape earlier. Liberals have a long, ghoulish record of hijacking victims to shame their enemies and emotionally blackmail people into adopting their policies, and this case is especially egregious because the victim in question said no such thing.

Certainly, Smart says the remarks of one particular teacher, whose “who’s going to want you?” dismissal to teenage girls seems lacking in Christian compassion, played a role. But while I do not presume to know her views on the general subject, Smart’s speech does not blame abstinence education itself, or the general principle of abstinence.

A bit earlier, she mentions being “raised in a very religious household, one which taught that sex was something special that only happened between a husband and a wife who loved each other,” which she was “determined to follow.” And near the beginning of her speech, she makes clear that, also while in captivity, she realized that her parents’ strong belief in abstinence wouldn’t make them value her any less:

Why would they? Generally, Christians are far more understanding toward those who fall for sexual temptation than we’re given credit for, but here we needn’t even go that far. Being raped is not giving in to temptation. It’s not consensual sex. It’s not promiscuity. It’s not you making light of the sacred or wasting God’s gifts. Rape is a foul, violent crime for which the victim bears no fault, and the only “Christians” who think otherwise either reside in some isolated fringe of no practical significance or exist within liberals’ slanderous imaginations.

It’s true that rape can lead to all sorts of doubts about one’s sexuality and self-worth, and it’s not implausible that those effects could be heightened for people with a religious attachment to their virginity. But it’s preposterous to suggest that valuing your virginity and wanting to save yourself for one special person are therefore intrinsically destructive beliefs, and it’s a stretch to suggest that the phenomenon is unique among conservatively religious victims – feelings of guilt and lost self-esteem are commonly reported reactions, and are routinely cited as part of what makes rape such a horrible thing to do to anyone, not just one particular subset.

Think of it this way: as disappointed as religious parents would be to learn their teenager has been sexually active, they’d be far more troubled to learn he or she had killed someone or stolen something. Does that mean they would look down on their child for shooting an attacker in self-defense, or stealing bread and water to save a starving person? No. The prospect is absurd for the same reason expecting them to think any less of a raped daughter would be absurd: having principles doesn’t mean we’re idiots who can’t understand the concept of facts and circumstances.

Well-intentioned and well-adjusted people do not stoop this low to demonize people and ideas they disagree with. Would it be too much to ask any of the abstinence critics in our audience what the real motive is?