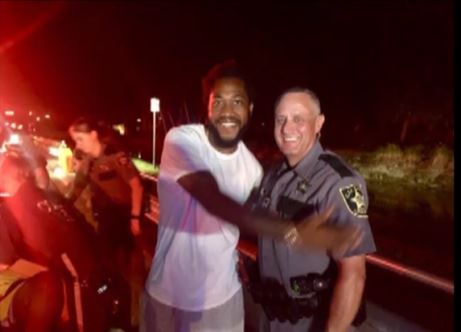 A couple pulled over for speeding this week gave the police officer the best excuse ever: they were in the middle of having a baby. Florida sheriff’s deputy Robert Pounds clocked a car going 63 mph in a 45 mph zone at 4:30 a.m. on October 1, and when he approached the vehicle he heard a man yelling, “Officer, help!”

“Officer, you have the right to stop me, I’m not even gonna lie,” Wilfrid Jean-Louis told Pounds. “We have baby coming out, look, look, look! That’s the reason why I’m speeding, officer. I don’t know what to do.”

Naples Daily News reports that Jean-Louis’ wife Fabienne Gorges was screaming in the passenger seat and the baby’s head was crowning. Pounds called for backup and immediately jumped into action. He ran to his patrol car to grab latex gloves and a sterile blanket. Then he delivered the baby girl — and the entire event was captured on his police car’s dash-cam.

CCSCO Sargeant David Drucks was one of the deputies who responded to Pounds’ call for backup and said he could tell through the radio that Pounds was stressed.

“I don’t get shook up too easily, but this was a little nerve-wracking just because it was a newborn,” he told Naples Daily News. “My training kicked in and I just wanted to help mom and the baby.”

He said that of all the excuses he has heard for speeding, this one was “pretty reasonable.”

According to DISRN.com, the new parents were so grateful for the assistance Pounds gave them in welcoming their baby girl into the world that they gave her the middle name “Robert” in his honor.

In his 26 years as a police officer, Pounds said this is the first time he has helped someone give birth. “It was exciting. It was a bit nervewracking,” he said. “But I was happy to be the one to help these people have their child and I’m glad everything turned out okay and I hope the baby grows up to be healthy and happy and live a long, good life.”