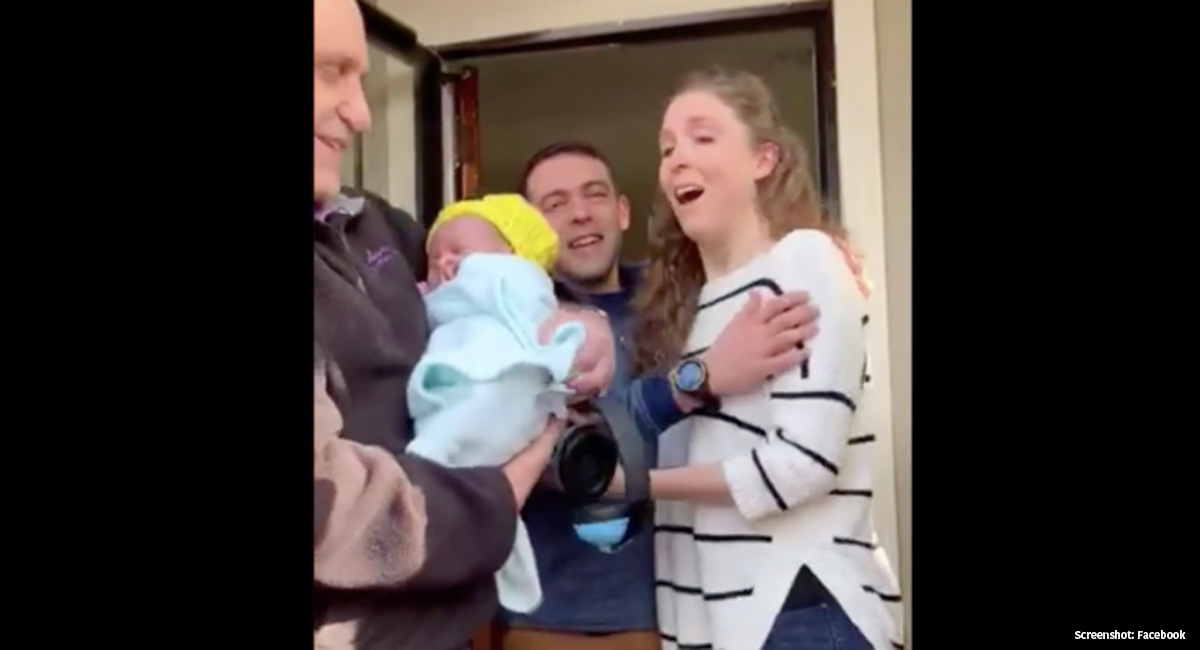 Twenty-nine-year-old Army vets Michael and Karen Faherty had been in the process of adopting for over a year. While expecting a final home inspection one day last month, they were overcome with joy when the adoption agency, as well as members of Michael’s firefighter unit, knocked on their door with the baby boy they had been approved to adopt.

Karen had her suspicions when they got a letter from the agency informing them of the apparent last-minute home inspection due to a change in the law, even though no law had changed. “I think we’re getting a baby,” she told Michael.

The couple had struggled with infertility for years, and after putting down roots in Maryland at the end of their service commitments, they decided to begin the adoption process. Adoption can be an emotionally arduous endeavor. “Knowing adoption would be a part of our story, we knew it would be a twisty path to actually start that family,” Michael Faherty told the Capital Gazette. “What I don’t think either of us expected is the highs and the lows this journey would take us on.”

The couple reached out to Adoption Makes Family, who guided them through the process. The agency has a reputation for sometimes surprising the couple with their adopted child in order to have a story to pass down about the day they became a family. The agency’s Executive Director, Dean Kirschner, said the birth parents who chose the Fahertys were excited about the surprise.

Knowing Michael was a local firefighter, Kirschner enlisted the support of Michael’s department to facilitate the surprise. The touching video that has over a quarter of a million views on Facebook shows the moment when the firefighters march up to his door, chanting cadence, as fire trucks and ambulances scream down their street. But instead of an emergency or the final inspection they were told to expect, Michael and Karen were greeted with Kirschner holding their adopted son in a knitted firefighter uniform. “Thank you so much,” says Karen on the video, as she starts to cry, bending down to kiss the baby boy, whom they named Michael Terrance Faherty III.

“It’s the best feeling in the world. It was such a gift that the birth parents gave to us that we dreamt about this time for so long and without them, this dream would never come true,” Karen said to WJLA.

A firefighter with @AACoFD & nurse with @UMMC are surprised with a baby boy this weekend. They waited a year to #adopt after dealing with #infertility and are now parents.
The heartwarming surprise video & interview at 6 pm. pic.twitter.com/Tf8VFh2qUK

But that wasn’t all — since the couple weren’t expecting to receive their son that day, Michael’s troop had collected enough donations to fill the accompanying ambulance full of diapers and baby items.

Michael told Good Morning America that he and Karen are overwhelmed with gratitude for his “brother and sister firefighters who came out to show their love and support, who pitched in to fill our refrigerator with food, and who showered little Michael with all the toys, clothes, and diapers he could possibly need.”