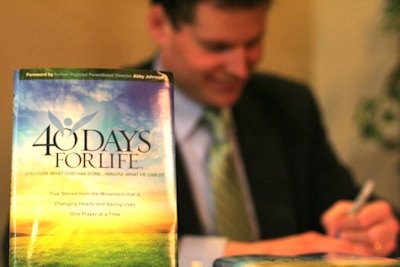 Last Thursday 40 Days for Life co-founder Shawn Carney spoke in Fresno, California at an educational event for Right to Life of Central California. Afterwards we caught up with him to get his thoughts on the new 40 Days for Life book, released January 28 by Cappella Books.

Live Action News: How did the book come about, and what has the response been so far?

Shawn Carney: When David Bereit and I decided to write the 40 Days for Life book, it was last spring, when we saw the approaching 40th anniversary of the Roe v. Wade decision, we saw NARAL and Planned Parenthood planning celebration events to honor Roe v. Wade. We just thought that the story after 40 years of abortion, after 55 millions little boys and little girls had been lost, the story of Roe v. Wade does not need be what Planned Parenthood and NARAL and the abortion industry say that it is. It needs to be the story of people in America that are sacrificing, that are going out when they can be doing so many other things to save these babies, to reach the women who are having abortions, to reach the workers.

That’s why we decided to put together the 40 most powerful stories, many of which we’ve never revealed. We’ve never revealed all of them in full detail and just share some of the hearts and minds. You know, we have become so cold as a nation, and we want the book to put a face, a heart, and a soul on abortion. So it can’t be tucked away; it’s something that happens to people, something that people choose, and it’s also something that people don’t choose at the very last moment. And so it’s an inspirational book. It’s really a shot in the arm.

We’ve been overwhelmed at the reaction and the feedback we have gotten. We had Jim Daly, president of Focus on the Family, endorse the book. We had George Weigel, the biographer of Pope John Paul II, endorse the book, so many different Catholics, Protestants, and Evangelical have rallied around it. And so it’s really been a positive thing and something we obviously want to make an impact. 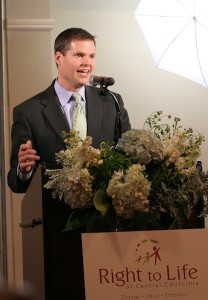 Live Action News: Can you give us a preview of any of the stories – a kind of look inside?

Shawn Carney: Absolutely. We have one of the most profound stories that happened to me during a 40 Days for Life visit. A mom in California who chose life for her severely handicapped baby. She had actually scheduled an abortion after two doctors told her to have an abortion.

She drove then to Planned Parenthood in Orange. She saw the 40 Days for Life volunteers. They had a fetal specialist in Los Angeles, who specialized in severely handicapped children, offer his services for free. They drove this mom to the appointment. She chose life for her baby. Her baby was born with no legs and a cleft pallet. Yeah, she chose life and named the baby Milagro – “miracle” in Spanish.

It’s just a beautiful story to hear this woman’s background, which is in the book. She is from Mexico, and she’d been in a very difficult marriage – just the circumstance where the abortionist would say, “You know, you need to have an abortion.” And yet she got there; she got to that point where she made an appointment, showed up for it, and yet had the courage to leave. And we didn’t put this in the book, but when I asked her for permission to tell her story, I changed her name, changed the location to protect her identity. She insisted I use her real name and that I use the real location, so one day her daughter could read that chapter in the book and know how much her mom loves her. And that’s really the stuff that people need to hear.

We live in a very cold, cynical world. There are a lot of reasons for despair, but there are also a lot of reasons to hope, because a lot of women choose life at the very last moment, when the world has kind of turned their back on them and said they should have an abortion.