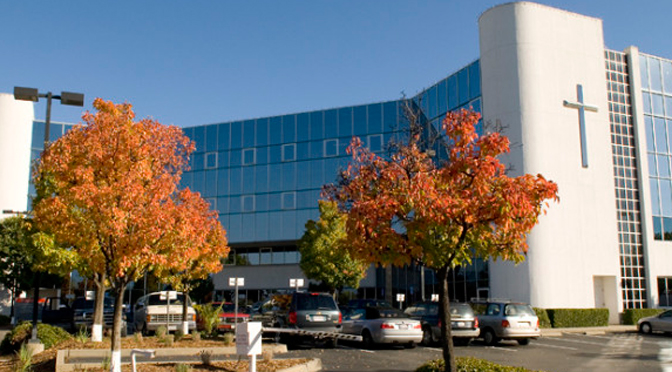 A few days ago, the American Civil Liberties Union announced it was suing the Catholic health network Trinity Health Corporation over its refusal to perform abortions. At NBC News, New York University ethicist Arthur Caplan writes in defense of the ACLU’s efforts to force Catholic life-savers to kill:

The lawsuit says Trinity is failing in its duties to provide proper care to women in rare emergency situations when an abortion is required to save the life of the mother.

Caplan should read the US Conference of Catholic Bishops’ medical-ethics directives more closely. While USCCB does forbid “every procedure whose sole immediate effect is the termination of pregnancy before viability is an abortion,” it permits treatments “that have as their direct purpose the cure of a proportionately serious pathological condition of a pregnant woman […] even if they will result in the death of the unborn child.”

Patients with cancer whose disease might be made worse should they become pregnant or for whom treatments might pose terrible risks to a fetus cannot have their tubes tied.

Again, USCCB’s own words suggest otherwise. It forbids “direct sterilization of either men or women, whether permanent or temporary,” but allows “procedures that induce sterility” when “their direct effect is the cure or alleviation of a present and serious pathology and a simpler treatment is not available.”

And emergency contraception or even a discussion of it even post-rape is off limits too.

True, but emergency contraception’s capacity to kill a living human is something we know of through secular science, not the Bible, making it just as ethically problematic for non-Catholics as it is for believers.

In all three complaints, Caplan entirely ignores the fact that a separate patient is present and any question of whether he or she deserves any consideration—in other words, he simply omits whatever ethical variables might complicate the subject at hand, which are the entire point of getting an “ethicist’s” perspective. Apparently at NYU the practice of ethics is indistinguishable from writing NARAL press releases.

The restrictions on what doctors can do in Catholic facilities impacts many female patients, Catholic and non-Catholic. Catholic hospitals account for one in nine hospital beds nationally and as many as 1 in 6 in some states. Ten of the 25 largest hospital systems in the U.S. are Catholic. In the past decade mergers have led to a 16 percent increase in the number of Catholic-sponsored hospitals.

One in nine hospital beds are Catholic in a country where one in five people are Catholic? Stop the presses!

Some may argue that Catholic facilities should be free to determine what is medically consistent with Catholic values? But it’s a false argument.

For one thing, Catholic hospitals are not private entities. They took in $115 billion in 2011 alone from Medicare and Medicaid. They also get tax exemptions and other public money.

Funding which is subject to multiple amendments protecting providers’ conscience right not to partake in abortion or sterilization.

They are also bound by Federal laws such as the Emergency Medical Treatment and Active Labor Act (EMTALA). This is a federal law requiring that anyone coming to an emergency department be stabilized and treated, regardless of their insurance status or ability to pay. The ACLU argues that means performing an abortion if that is the standard of care in an emergency when the mother’s life is on the line.

Claiming an EMTALA violation might be more credible if Caplan had been able to establish that Catholic guidelines do increase medical dangers to patients, when in reality they account for emergency situations. Besides, the last time the ACLU tried this, the judge threw the lawsuit out on the grounds that if the Catholic hospital in question actually had been responsible for harm, the patients or their families could have brought a malpractice suit—which none did.

Hospitals awash in public funds are duty bound to follow the law, not religious directives.

Funny he should mention that, since there’s another self-professed health provider awash in public funds which is just as duty bound but has opted not to follow multiple federal laws… yet Caplan derides efforts to bring Planned Parenthood to justice as a “witch hunt” against “the main health providers for lots and lots of women.”

There is room for conscience in health care but not when it means women patients will die in the ER.

And so we conclude with Caplan failing to show that there’s a crisis of Catholic hospitals subjecting women to unnecessary deaths, but making perfectly clear that he is comfortable with a procedure and organization for which deaths are the intended outcome.