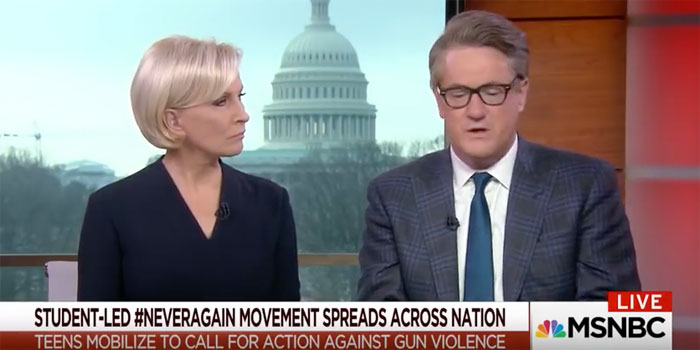 It’s no secret: young Americans are trending pro-life, much to the consternation of the abortion industry. And not only are millennials more likely to be pro-life than previous generations, they’re also more passionate about their beliefs than those who support abortion, who tend to be more complacent. For example, pro-life student groups now outnumber Planned Parenthood groups 4 to 1.

But the question is, why? What is it that makes millennials more pro-life than previous generations? According to MSNBC’s Joe Scarborough, it’s simple: science.

On “Morning Joe,” Scarborough was discussing the public’s changing views of gun laws, and made a comparison to abortion. “You are seeing poll numbers move on abortion for banning abortions after 20 weeks,” he said. “Why? Because for the past decade, younger Americans have been going in and they have been seeing 3-D imagery where they can look into the womb. If some activist said, ‘Your child is a lump,’ I must tell you, I’ve had four kids, I’ve never once had a doctor go to me, ‘we’ve got your lump, let me show you your lump, look at your lump’s profile.’ This is an example of science, technology changing that is going to change the politics of abortion. This is an issue that culturally is going to change. Americans, younger voters are going to become more conservative on abortion because they see their child very early on in the womb.”

Ultrasound technology has done wonders when it comes to saving lives, which is precisely why the abortion industry hates it so much.

Science is changing the debate; as medicine has advanced, we have been able to learn more and more about the humanity of preborn children. At just 22 days, the baby’s heart begins to beat. A baby’s brain waves can be measured by six weeks. Young Americans have grown up, first seeing blurry ultrasound photos of their own brothers and sisters, and now, even clearer images of their own preborn children. Though the abortion industry tries to hide it, the truth can’t be hidden. And it’s that truth that will eventually bring an end to abortion.