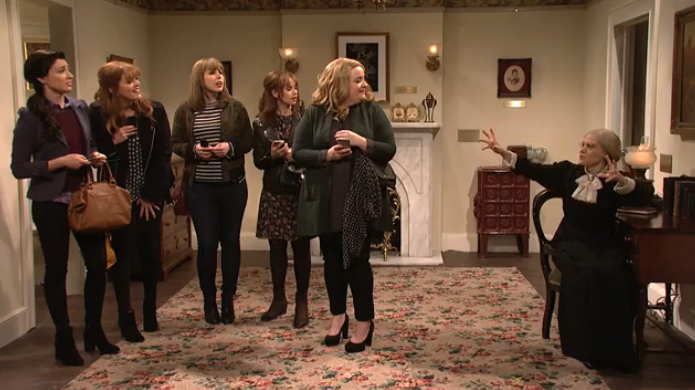 On the January 14 episode of “Saturday Night Live” abortion came up in a way one might not expect. Five friends are depicted visiting the home of Susan B. Anthony (played by Kate McKinnon) and they decide to summon her. The friends are successful and in awe to see the ghost of the feminist icon appear to them, at least initially. They want to thank her, since “it’s kind of a hard time for women right now, but you give us hope.”

Anthony is chock full of advice and feminist phrases. She also tries to show the young ladies of today parts of her house and becomes intrigued with modern technology like their cell phones. As the women discuss how to get home, however, the tone changes. They become agitated with Anthony, exposing their true colors.

As the women get ready to leave, Anthony tells them to remember that, “A woman is just as good as a man,” to which they politely agree. Then there’s another reminder from Anthony,  that “Abortion is murder!” The women are shocked, horrified, and confused. One exclaims “What?!” Yet, there’s no further discussion or debate about the issue. The sketch just ends. Since Anthony has been played off as annoying throughout most of the sketch, this is likely an attempt to further portray her as such.

Whatever the shows’ intention, the declaration is true that “abortion is murder,” since life begins at conception, and abortion ends the life of a preborn child. But Anthony, and the pro-life movement as a whole, are more eloquent than that. Here are some quotes from Anthony that “Saturday Night Live” did not think to include:

Here is what a Spring 1998 issue of The American Feminist from Feminists for Life had to say:

Anthony referred to another violent rupture of the mother/child bond: abortion. The Revolution, the radical women’s paper she published with Stanton, editorialized against abortion, terming it “child murder” and “infanticide” while compassionately addressing its root causes in women’s oppression and advocating family planning…

The Spring 2007 issue added that one of her speeches “clearly presents abortion as a symptom of the problems faced by women, especially when subjected ‘to the tyranny of men’s appetites and passions.’ Anthony argues that it is not sufficient to address these effects; ‘the cause must be removed…the tap-root must be severed’ by enfranchising women, acknowledging their rights in family and society, and empowering them to make nonviolent choices.