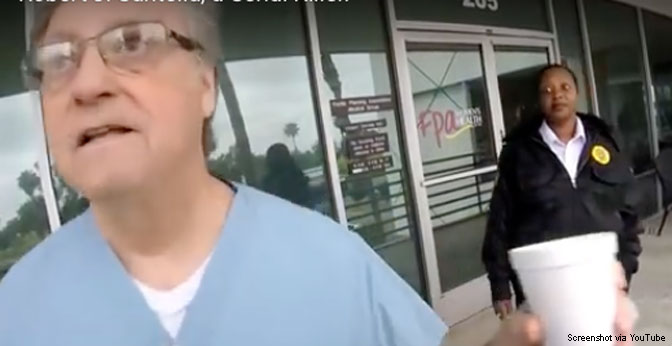 Robert Santella, the San Diego-based abortionist known for his 2016 viral rant against a pro-lifer, died unexpectedly last year at the age of 74. Operation Rescue first reported Santella’s death, which happened on January 17, 2018. Santella was an abortionist for many years at Family Planning Associates (FPA) in San Diego County, and he also operated a private practice near San Diego State University.

Santella was well known for a disturbing interaction with a pro-lifer outside the FPA abortion facility where he worked. In the video, Santella, dressed in scrubs, approaches the activist brandishing scissors as he professes his love for killing babies. “I never listen to Christ,” he says in the video. “I do have a darkened heart. I do, I do. Very much so.”

Santella’s actions in the video prompted an investigation by the California Medical Board, which further revealed gross misconduct on his part. In addition to the “aggressive” and “outrageous” behavior he exhibited during the 2016 altercation, the investigation also revealed that Santella over-prescribed narcotics and opioids, and botched an abortion in 2015. The medical board also noted Santella’s past disciplinary issues. In 2000, his medical license was revoked because he failed to maintain adequate medical records. That revocation was stayed, and he instead served four years on probation. The CA medical board ultimately ruled that Santella was unfit to practice medicine.

After fallout from the video and the medical board’s investigation, Santella’s ability to practice at the Sharp Healthcare group of hospitals was revoked. He was also fired from the FPA abortion chain.

Operation Rescue’s Troy Newman expressed condolences to the Santella family for their losses, adding, “God can forgive every sin, no matter how bad, if one confesses, repents, and puts his faith in Jesus Christ for salvation.”