A California abortionist has agreed to surrender his medical license after allegations of over-prescribing opioids and other controlled substances, botching an abortion, and unprofessional conduct during an altercation outside an abortion facility.

The Medical Board of California detailed the allegations against Santella in a 25-page accusation filed July 17, according to a report from the San Diego NBC affiliate:

The Medical Board claimed Santella over-prescribed narcotics to six patients and botched an abortion on another patient. The Board also cited Santella’s “aggressive” and “outrageous” behavior outside the Family Planning Associates abortion clinic on Miramar Road in June 2016 as a cause for revoking his license. 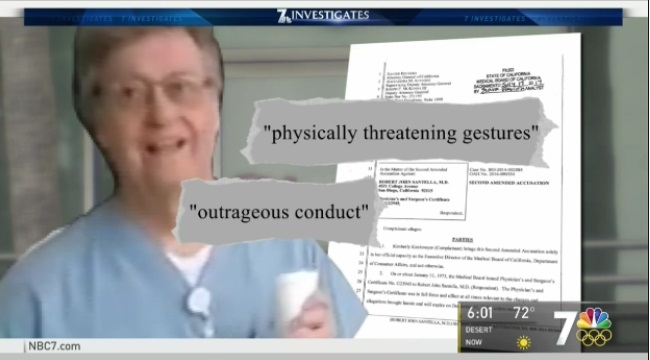 The NBC report goes on to state:

Santella also told them he would “surrender his medical license rather than fight the accusation in the state’s administrative law court.”

In detailing Santella’s “gross care” in the treatment of several of his patients, the Board noted that Santella failed to maintain accurate records and failed to document “a clear medical indication” for prescribing the controlled substances in question. And, in some instances, Santella also failed to document that the drugs had been administered along with the reasons why they were prescribed.

The document reveals that Santella was over-prescribing the following opioids: Dilaudid, Oxycodone, Percocet, Norco, Demerol, and Fentanyl. In one instance, Santella told the Medical Board that he refilled one patient’s prescriptions just to “get rid of her.”

In September 2015, Santella committed a second trimester abortion on a patient at FPA and indicated in his notes that all “products of conception” had been accounted for. 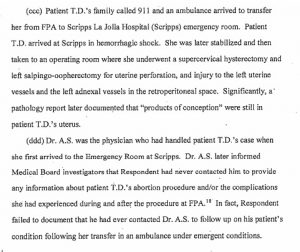 The Board of Medicine’s document indicates that during the abortion procedure the patient had “suffered significant blood loss,” requiring treatment to stop the hemorrhaging.

Despite the media’s false narrative that abortion workers are always caring and compassionate, this case reveals that the opposite took place.

The document notes that despite the significant loss of blood, the abortion patient was marked as “stable” and was then sent to FPA’s recovery room.

As has been described by others once involved in the abortion industry, this lack of regard and rush to get to the next patient is common, as the goal is to commit as many abortions as possible each day.

In this incident, while the patient was in recovery, someone there noticed the bleeding. But instead of calling 911, the abortion patient was returned to the abortionist for further treatment. 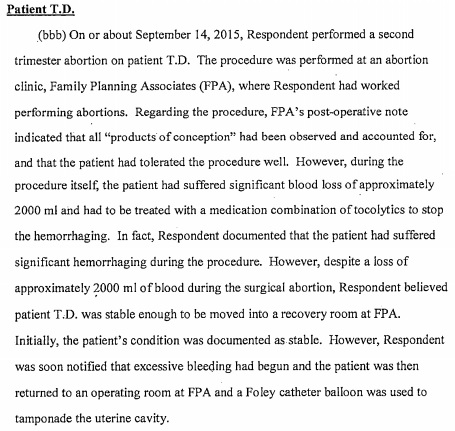 Eventually, the woman’s family called an ambulance, and she arrived at the hospital in hemorrahagic shock. There, the woman underwent intensive surgery where doctors found that pieces of her preborn child were still inside her uterus.

Even more troubling – but most likely normal within the abortion “profession” – is the fact that Santella never contacted emergency room physicians to provide them any information about the abortion or conditions leading up to the patient’s hospitalization. The only information received by emergency room staff came from the woman’s family, not from Santella or any abortion facility staff.

Pro-life group Operation Rescue previously detailed an emergency at FPA that was later confirmed to be related to this incident:

In that case, Operation Rescue reported that the pro-lifer who recorded this video, Joan Pernicano, was put in touch with the patient’s mother and learned that it was she who called 911 when abortionist Santella and his staff would not:

The mother had been angry because Santella refused to let her see her daughter even though her daughter was calling for her in obvious distress.

“The mother did not want her daughter to have the abortion and tried to talk her out of it. She had a premonition that something was going to happen so that’s why she accompanied her,” Pernicano told Operation Rescue. “No doubt the daughter would have bled to death if her mother hadn’t been there and called 911.”

The patient was hospitalized for eight days. She received a hysterectomy and suffered an infection.

In addition to the charges detailed above, the Board also found that the California abortionist had engaged in “unprofessional conduct.” California defines this as “conduct which breaches the rules or ethical code of the medical profession, or conduct which is unbecoming to a member in good standing of the medical profession and demonstrates and unfitness to practice medicine.”

The incident occurred outside the abortion facility on June 11, 2016, and was captured on video, as was previously reported by Live Action News. Santella was accused of being “unfit to practice” after this disturbing video of him confronting abortion opponents outside the San Diego, California, facility went viral:

That confrontation was videotaped by two abortion protesters. One of them, Zephaniah Mel, spoke to the San Diego NBC affiliate about the incident, which NBC described this way:

Mel urged Santella to “stop murdering babies.” In response, Santella “aggressively pressed his face to within inches of (Mel’s) face and angrily replied ‘Why?'” According to the accusation, “When asked if he did that to babies, (Santella) replied in a guttural tone, ‘Yeah, I love it!'” 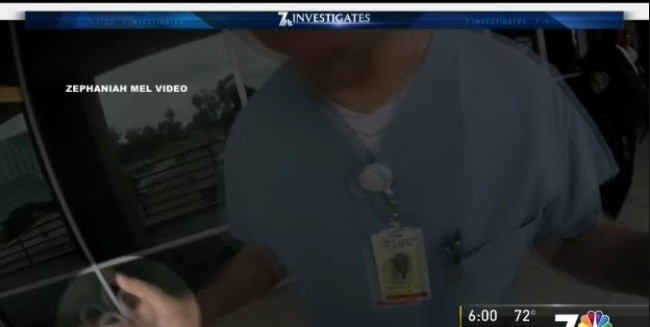 In the interview with NBC 7 Investigates, Mel said he felt threatened when Santella approached him with the scissors:

“It was very close to the top of my chest, if not my neck,” he said. “It was a very intense confrontation.”

Mel said he backed away from Santella, and ended up very close to the railing on the second-floor walkway where the confrontation took place.

“(Santella) was leaning towards me inch-by-inch,” Mel recalled. “I could have tipped over. I could have fallen from the second floor.”

Santella defended his conduct, telling NBC 7 Investigates that he lost “his composure that day and regrets his behavior.”

Santella’s attorney claimed that Santella allowed his emotions to get the better of him, adding that the abortionist was “protecting women’s rights” by committing abortions. Despite taking the lives of numerous preborn children in the womb, Santella’s attorney claimed the abortionist feels “deeply hurt” when protesters denounce him as a “murderer.”

Despite the allegations against him, the California Board order states that the surrender of Santella’s medical license will become effective on December 31, 2017.