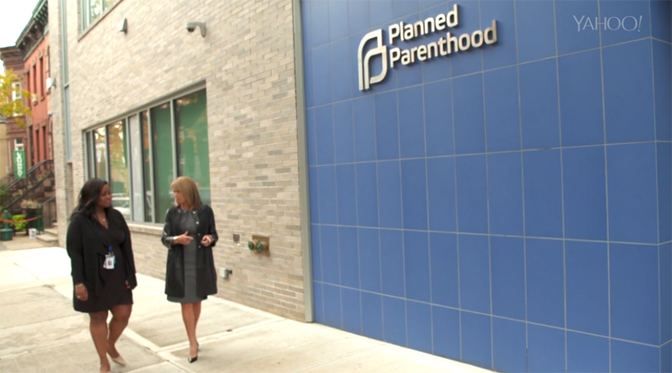 Last week, we called out Katie Couric for acting as a Planned Parenthood mouthpiece while in the guise of a reporter. This week, Salon’s Gary Legum spectacularly misses the point of pro-lifers’ criticism in a particularly-smug column on “the insane right-wing freak-out over her Planned Parenthood interview.” The condescension rings hollow, though, thanks to the manifest duplicity of pretending that pro-lifers were criticizing her merely “for showing what PP clinics are really like”…

The resulting four minutes of video made antiabortionists angry, presumably because none of it was dubiously-sourced stock footage that claimed to have been shot inside a PP clinic but was actually from somewhere else […] And yet antiabortionists are up in arms over the segment, claiming it hides Planned Parenthood’s true nature. After all, they have not just those discredited videos.

To paraphrase Ronald Reagan, the problem isn’t that Mr. Legum is ignorant, it’s that he “knows” so much that isn’t so. As Live Action has been covering for months, the crimes indicated in the videos are very real, the Center for Medical Progress videos have not been discredited and were not deceptively edited, their imagery accurately represents the allegations, and the incomplete federal investigation and small handful of state ones have not exonerated Planned Parenthood.

They also have Yelp reviews to prove their case that Planned Parenthood is basically just an unclean, uncaring abortion factory churning out fetal tissue the way Foxconn churns out iPhones. Because when we’re talking about the health of women, we should definitely rely on a handful of cherry-picked reviews written by anonymous Yelp users. That’s a great standard for an allegedly modern society.

Nobody said that Yelp reviews are the standard. They are merely one more piece of the broader picture that’s come into focus over the course of several years’ worth of investigations into Planned Parenthood and listening to women’s experiences with the organization. But if Legum is that concerned about evidentiary standards, than surely he’s also offended by NARAL encouraging fake Yelp reviews of crisis pregnancy centers?

It’s great that some poor 17-year-old girl who needs treatment for an STD should have to go behind bulletproof glass and through a metal detector before being treated for gonorrhea. That is definitely a healthy message that in no way implies sexual activity is shameful that we should want to send to teenagers.

It’s telling that despite the number of pro-aborts who’ve violently attacked pro-lifers in recent years, you don’t hear us constantly leveling odious insinuations about our opponents’ predilection for violence like the one above. And as a matter of fact, that poor teenager doesn’t “have to” do that at all; there are plenty of other health centers out there ready to make Planned Parenthood obsolete.

I couldn’t help but think back to some of the justifications I read about HB2, the Texas antiabortion law that led to the infamous filibuster by Wendy Davis and was eventually signed into law by then-Governor Rick Perry […] The bill was necessary, they said, because they were oh so concerned with women’s health, with making sure that women who underwent abortions were doing so in the safest and cleanest of facilities. The bill would protect women from the bloodthirsty butchers of the abortion industry.

Anyone with half a brain in her head knew this was garbage. Abortion is actually a safer procedure than childbirth for mothers, with a mortality rate of .6 per 100,000 compared to 8.8 per 100,000 for live births.

And those with more than half a brain are more likely to be familiar with the numerous researchers who’ve denounced that as a phony statistic.

But for the four people in the country who might believe in the sincerity of the antiabortion crowd that got HB2 passed in Texas and similar laws passed in other states, the reaction to Couric’s segment should lay that to rest. Here is a nice, clean medical facility stocked with what looks like top-notch medical equipment, trained nurses and gynecologists on site, and anything else necessary to ensure that the women who come there seeking an abortion can have it performed safely and discreetly. All without without [sic] being shamed or judged, since the psychological health of women making a difficult decision is as important as their physical health.

Execution chambers are clean and tidy too, but that doesn’t make them non-controversial—not even, ironically, to the very same pro-aborts so impressed with the sanitary look and feel of abortion clinics. If Couric had done an “inside look” at capital punishment that fixated solely on the generous last meals, comfy pillows on the gurneys, etc., nobody would write apologias as obtuse as Salon’s.

Similarly, our objection here is not that Katie Couric broached the subject and took a camera into Planned Parenthood (indeed, pro-lifers are big fans of cameras inside abortion mills). No, our objection is that she practiced no journalism whatsoever while there—instead she shamelessly repeated or let stand the organization’s lies and asked them no challenging questions about the controversy they’re embroiled in.

Legum’s lecture addresses none of these critiques, because he has no answer. His real problem with pro-lifers is that he wants the media to propagandize for abortion, and we didn’t indulge him.