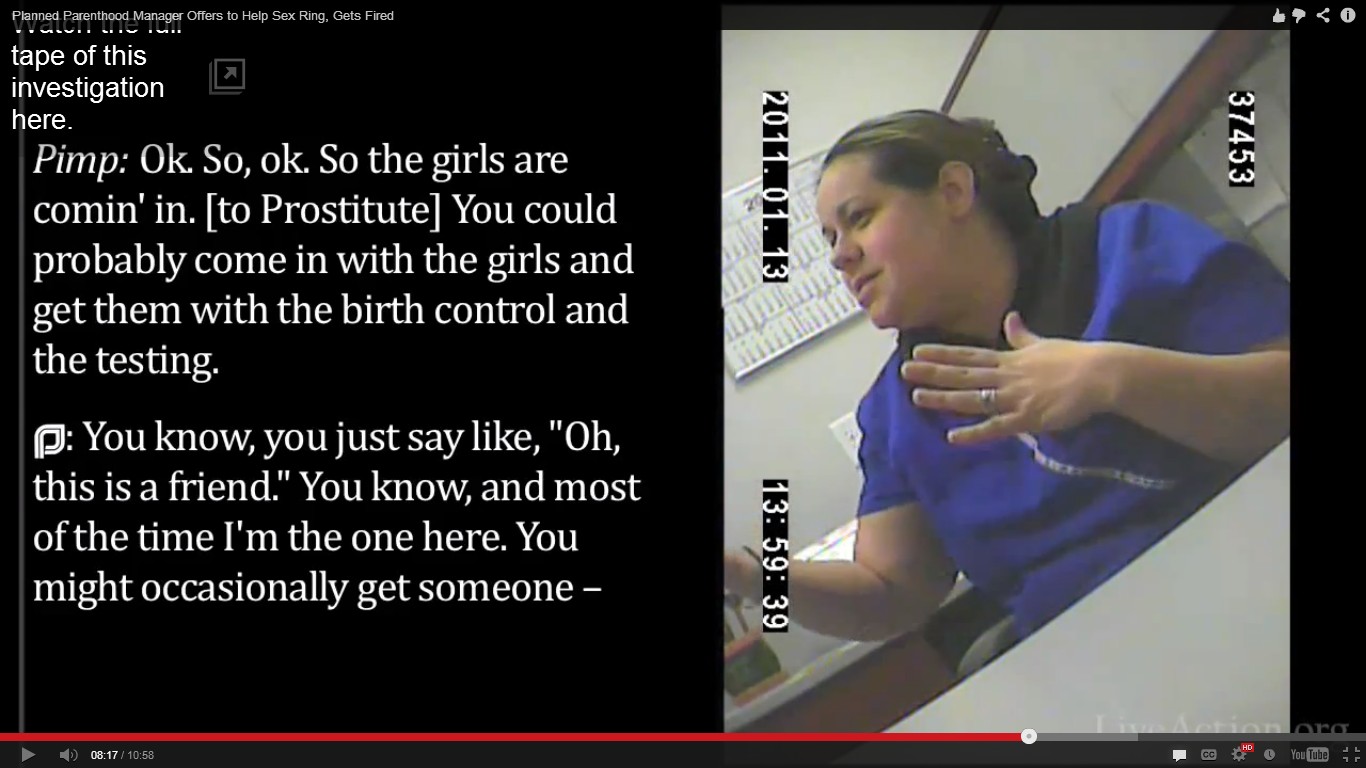 Abridged video below. The full, unedited video is the 2nd video embedded in this post.

February 3, 2011 – Just days after an explosive undercover video showed a Planned Parenthood manager in New Jersey coaching a purported pimp and his prostitute how to cover up their child sex trafficking operation, Live Action releases full footage from a Richmond, VA Planned Parenthood abortion center showing the clinic agreeing to help the pimp get secret abortions and cheap birth control for his trafficked girls. The new video is evidence of the endemic problem of Planned Parenthood’s willingness to aid and abet in the sexual exploitation of minors and young women.

“Planned Parenthood’s problems go far beyond New Jersey. Our new video shows their Richmond clinic willing to aid and abet the sexual exploitation of minors and coaching a pimp about how girls as young as 14 – 15 could circumvent parental consent laws for secret abortions,” said Live Action President Lila Rose. “Watch the video – the clinic worker admits they do this ‘once or twice a month.’ Our investigations of 12 clinics in the past four years show a pattern of Planned Parenthood’s willingness to cover-up the sexual abuse of minors and young women.”

“We are sharing the full Richmond footage and transcripts with Virginia law enforcement officials and we are formally asking Attorney General Ken Cuccinelli to conduct a statewide investigation of these heinous practices, just as the New Jersey Attorney General is opening
her own investigation into Planned Parenthood’s compliance with the law in her state. Planned Parenthood needs to be held accountable,” Rose continued.

The new Richmond video presents a similar scenario as the New Jersey video. A man posing as a pimp and accompanied by his “bottom girl” seek assistance for getting abortions, STD testing and birth control for girls they “manage” as sex workers, who are from out of the country and as young as 14 to 15 years old.

The investigation continues to unearth alarming evidence that Planned Parenthood, which receives more than $350 million from the American taxpayer every year, is willing to facilitate the sexual exploitation of minors and young women.

The following quotes are excerpts from the Richmond video, after the employee has been told some of the girls are 14 – 15 years old:

“If someone’s a minor and they don’t want their parents to know – parent’s insurance – so an abortion would show up. You fill out paperwork and we kinda help you set it up and we have a confidential hotline that will call you at whatever number you give us and handle the whole thing. So, for someone who’s a minor, that’s a really good thing. We do ‘em like once or twice a month here.”

“We’re pretty good at handling if someone doesn’t want someone else to know.”

“We can talk to them over the phone – everything’s confidential.”