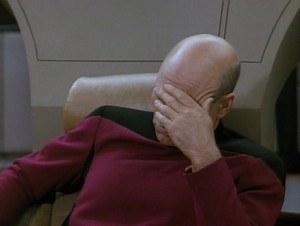 In what must have been an exercise to see just how far a narrative can be stretched until it snaps, RH Reality Check legal expert Jessica Mason Pieklo writes about an Ohio case which supposedly demonstrates that “government restrictions on access to abortion care represent one piece of a larger attack by conservatives on procreation and family rights generally”:

Asim Taylor has four children with four different women, to whom he owes nearly $100,000 in child support payments. Taylor recently pleaded guilty to four charges of felony nonpayment of child support. In connection with his plea, an Ohio judge placed Taylor on probation and, as a condition of that probation, ordered Taylor not to have any more children until he had paid his child support debt. Specifically, Taylor was ordered to “make all reasonable efforts to avoid impregnating a woman during the community control period or until such time that [he] can prove to the Court that he is able to provide support for his children he already has and is in fact supporting the children or until a change in conditions warrant the lifting of this condition.”

Judge James Walther characterized his decision as a “matter of common sense and personal responsibility,” but Pieklo fears this “conservative judge” (who’s actually a Democrat) is continuing a trend of eroding the “fundamental constitutional right” to procreate, which—of course—is most endangered for “the poor and people of color”:

Perhaps in cases of extreme neglect or failure to support, it’s easier to stomach the kind of probation condition ordered for Taylor and other convicted persons. And there’s a long line of case law that justifies more state invasions of privacy based on a person’s relationship to the criminal justice system. But as the Buck v. Bell decision makes so clear, it really is a slippery slope from determining who is “fit” by the state’s standards to reproduce and who is not. In Buck v. Bell, the Supreme Court justified the mandatory sterilization law by reasoning that “three generations of imbeciles are enough,” reflecting a disdain for people with developmental disabilities in our culture and enshrining it in our law.

As more and more people fall into the reach of the criminal justice system simply because they are poor, decisions like those made in Taylor’s case threaten to do the same with the cultural disdain for poverty.

First, I think “impregnated four different women yet helped none of them with the resulting children” is straightforward and egregious enough that we can safely rule out Taylor’s skin color or economic class as the real motivating factor.

Second, last time I checked, not being forced to live behind bars is at least as big a “fundamental constitutional right” as child-rearing, yet it’s unquestionably constitutional to revoke that right upon a guilty verdict, so one need not agree with Walther’s ruling to nevertheless understand that similarly revoking the right to reproduce isn’t exactly going out on a limb, legally speaking.

Third, if you really want to talk about enshrining “a disdain for people with developmental disabilities” in our law…

What I find most interesting about Pieklo’s piece is the way it actually undermines the narrative she’s trying to weave it into. Assuming this Democrat judge really is part of “the Right” and pro-lifers are uniformly as gung-ho about banning deadbeats from having kids as she suggests, wouldn’t punishing and restricting a man who reproduces irresponsibly only prove that the sex of the parent and maintaining “proper” gender roles aren’t our motivation, as feminist mythology teaches is why we really oppose abortion? That the welfare of children created by parents who don’t want them really is our driving concern?

It’s especially ironic to see a pro-abort expressing discomfort over a judge ruling that Taylor mustn’t create children only to imperil their welfare, considering that their movement justifies abortion using the exact same logic—except, of course, for the fact that abortion “saves” already-existing children by killing them, whereas Judge Walther’s ruling really would do what they pretend abortion does: simply prevent the victim from being created in the first place.

Indeed, so absurd is Pieklo’s attack that of the seven people who commented on the article as of this writing, three disagreed with her and a fourth had mixed feelings. When you can’t even get a majority of RH Reality Check’s notoriously lemming-like commenters to go along with your cockamamie contortion, there’s officially a problem.

The extent of the state’s power to restrict reproduction in the interests of the resulting children is a worthy topic of debate. But nobody in that debate owes a moment’s indulgence to such transparent bad-faith arguments.