“Abortion is the hushed killer of Black life that has silenced millions of George Floyds before they even took their first breath of air.” This statement was written by one of three researchers who recently published a commentary showing a significant racial disparity in United States’ abortion statistics. African-American author James Sherley M.D., Ph.D., joined researchers James Studnicki, ScD, MPH, MBA and John Fisher, PhD, JD in a stunning commentary published in the Journal of Health Services Research and Managerial Epidemiology. In it, they claimed that abortion denies Black children an equal opportunity to survive until birth.

The researchers are associated with Charlotte Lozier Institute (CLI), a research arm of the pro-life Susan B. Anthony List. They argued that the “years of potential life lost” due to abortion are substantial, given the disproportionately high rates of abortion in the Black community. This, they said, makes abortion “the most demographically consequential occurrence for the minority population.” 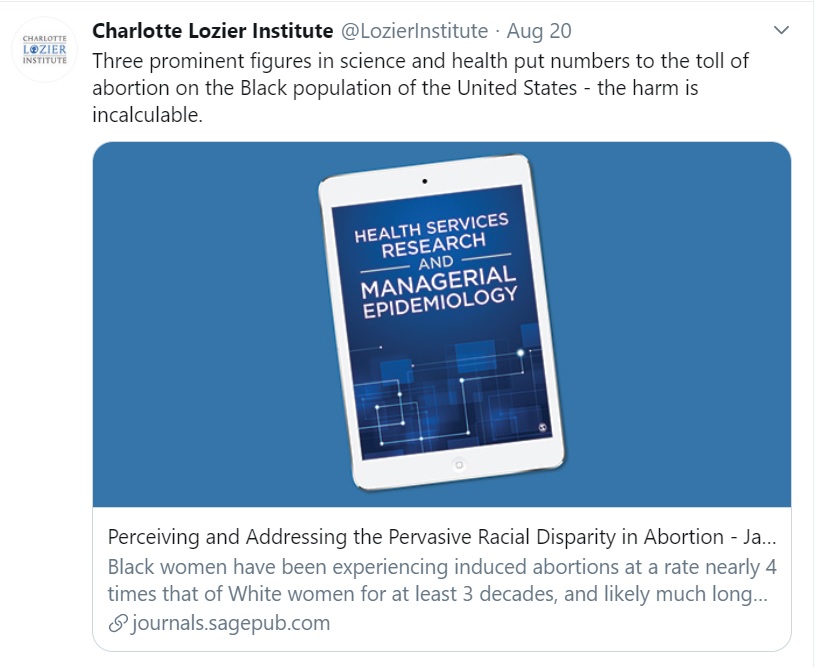 “… [M]y colleagues and I show how the racial disparity of abortion is the overwhelming cause of the destruction of Black lives in America,” African-American author James Sherley wrote in an Op-Ed on their research. He claimed that more Black American lives were lost to abortion than the total of many other causes of death.

“Yet, in this remarkable moment of social reform history, the lives of Black preborn children have been forgotten,” he added.

READ: Planned Parenthood says idea that ‘abortion is Black genocide’ is offensive… but there is good reason to believe it

One way to measure the impact of race-specific abortion rates on the size and demographic composition of the U.S. population is to calculate the YPLL from abortion and to compare its impact to other causes of death. YPLL is calculated by “accumulating all years from the age at death up to 75, for all deaths for each cause of death,” the authors wrote.

To examine this, the three researchers reviewed 2018 data from the State of Pennsylvania which has high abortion volume and a “very high black abortion rate (37.16)” as well as a “high racial disparity in abortion rates (4.80).” They found that abortions represented 28 times more deaths and 36 times as many years of potential life lost as Black homicides.

The authors compared Black maternal mortality to induced abortion and found that the racial disparities “are of the same magnitude and in the same direction, a ratio of about 3-4 times” despite the fact that “maternal mortality, in stark contrast to the high incidence of abortion, is an extraordinarily rare event,” the commentary stated.

The authors found Black women have for many years obtained abortions at a rate nearly four times that of white women. They reviewed data published by the Centers for Disease Control and Prevention (CDC) going back to the 1990s and discovered that disproportionately high Black abortion rates have been documented for at least three decades, perhaps longer. Yet, the authors point out that due to an inconsistency in abortion reporting overall and specifically reports of abortions by race, “CDC reports possibly underestimate the size of the racial disparity in abortion nationwide.”

Live Action News previously estimated that between 2010 and 2016, over 1.7 million Black babies lost their lives to abortion.

The authors said that the failure to count abortion as a death along with all other causes of death within the U.S. vital statistics system is a “distressing denial of science.” They emphasized that abortion’s impact on the size and racial composition of the nation is undeniable.

The authors summed up their findings:

Abortion has been euphemistically described as a “choice” or a human “right.” The undeniable objective reality, whatever one’s political persuasion or ideological posture, is that each abortion is a death. Death by abortion, however, has proven to be an inconvenient reality for many of our politicians and scientists alike…

The silence of the popular media and the lack of a robust scientific dialogue on the longstanding racial disparity in induced abortion suggest that a disconnect exists between its overwhelming demographic importance and the willingness of thought leaders to engage on the subject.

“The evidence is clear that for many decades Black children in the United States have not had, and do not have today, an equal opportunity to survive until birth,” they concluded.